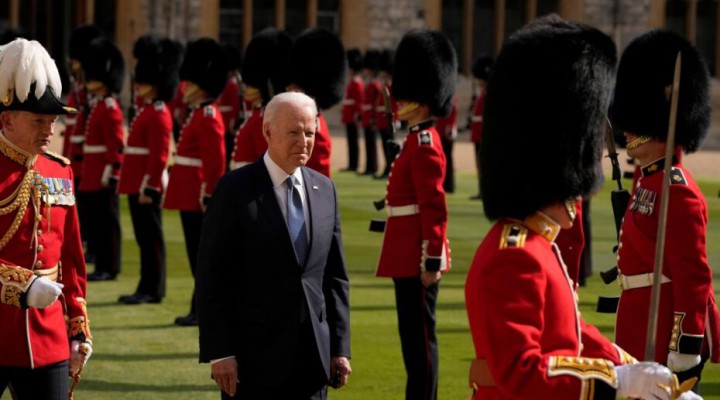 Capitalism and its inequality is the number one enemy of today’s world. That is the objective and empirical reality that is staring the world in the face.

U.S. President Joe Biden and his Western allies are trying to frame global challenges in a way that ultimately avoids dealing with the most urgent problem that really matters – the explosion in inequality under the capitalist economic system.

The poverty, hardship and litany of social problems, including the impact of the Covid-19 pandemic, that stem from the grotesque inequality that capitalism produces are – and should be – the number one challenge for all nations, particularly those in the West where the issue is most acute.

However, instead of addressing what should be blindingly obvious, Biden and other Western so-called leaders are framing the challenges in a cock-eyed way. That means the problem of capitalist inequality accumulates and gets worse. (And yet right-wing American media pundits have the ignorant stupidity to describe Biden and his Democrat party as being “radical leftists” and “Marxists”. Jeez, give us a break!)

Listening to Biden and the others at the Group of Seven summit over the weekend, one would think that the greatest challenge of our time is the purported clash between “democracies and autocracies”. That is, between the United States and its Western allies on one hand, and on the other hand Russia and China.

Yes, the G7 forum did mention other challenges facing the world: the Covid-19 pandemic and adverse climate change. They are of course priority concerns that need to be addressed. But the number one challenge of capitalist inequality is nowhere heard during the hours and hours of tedious discussions. How incredible is that?

In what is perception management or narrative control, Biden and the other Western politicians promulgate alleged adversity from Russia and China as somehow an existential problem of our time. (Russia and China are always calling for normal dialogue and relations, by the way). Biden says things like “the United States, the European Union, NATO and G7 allies will stand united together to confront Russia and China”.

OK, he tries to sound as if he doesn’t want an all-out war, but the logic of Biden and his allies is ultimately one of war.

On coming to Europe in his first overseas trip as president, Biden openly stated that he was rallying allies under U.S. leadership against what he disparaging calls “autocracies”. Biden’s tour of Europe was to “re-establish U.S. leadership”, reported CNN. While AP said the American president was “eager to reassert the United States on the world stage… pushing democracy as the only bulwark to rising forces of authoritarianism.”

The series of summits at the G7 and with EU leaders and NATO allies was framed in such a way as to be the prelude to a showdown-like meeting with Russian President Vladimir Putin in Geneva on June 16. What’s all the belligerence for? Can Biden not just meet another important world leader – Russia’s Putin – and discuss in an earnest and cooperative manner vital issues about the pandemic, climate change and nuclear disarmament. No, of course, Biden can’t. Because he and other Western politicians are held hostage mentally by their own false propaganda about alleged Russian malign conduct.

When Biden arrived in England last week ahead of the G7 summit his first speech was at a U.S. airbase, at Mildenhall in Suffolk, where he addressed troops. He depicted his mission in Europe as akin to the challenge of the Second World War. He talked about bomber aircraft taking off from that very base and fighting against Nazi Germany.

Then Biden linked that background to his meeting with Russia’s Putin. He said with a tough-guy tone: “I’m heading to the G7, then to the NATO ministerial, and then to meet with Mr Putin to let him know what I want him to know. And at every point along the way, we’re going to make it clear that the United States is back and democracies of the world are standing together to tackle the toughest challenges and the issues that matter most to our future; that we’re committed to leading with strength, defending our values, and delivering for our people.”

Building his historic narrative, President Biden then went on to say: “Here’s why this all matters so much right now: I believe we’re at an inflection point in world history — the moment where it falls to us to prove that democracies will not just endure, but they will excel as we rise to seize the enormous opportunities of a new age. We have to discredit those who believe that the age of democracy is over… We have to expose as false the narrative that decrees of dictators can match the speed and scale of the 21st [century] challenges.”

So Biden is making out that there is an equivalence between the historic fight against Nazi Germany and the “dictators” of Russia and China.

This has become a mantra in Washington under Biden, that the biggest historic challenge right now is between “democracy and autocracy”. And if we accept that narrative framework, then the intended conclusion is that we must accept American leadership. This is what the U.S. political establishment is trying to push with its frontman Joe Biden, and lamentably the European political class is falling into line. The upshot is that the world is being led into a dead-end of confrontation between the West and Russia and China. Why can’t the world just work together in cooperation and mutual multilateral benefit? Because the United States’ global power is predicated on hegemony which in turn requires control through setting up hostile blocs.

In the same week that Biden and his Western allies were declaring that they were seeking to address global challenges, and defending the “rules-based order” (whatever that means), a blockbuster revelation was reported and hastily buried by the corporate media. It was reported that billionaire capitalists in the U.S. paid no taxes. People like Jeff Bezos, Warren Buffett and Elon Musk, paid negligible or no tax on hundreds of billions of dollars in increased wealth. That’s only the tip of the iceberg. American CEOs and the entire capitalist ruling class have seen their wealth burgeon in recent years and they have paid little to nothing to society in the form of tax. This is while workers and their families are increasingly paying more tax, losing jobs, homes and their health.

This pathological, destructive and unsustainable condition under capitalism has seen vast chasms in inequality and poverty in all Western societies, but especially so in the United States. A handful of billionaires have more combined wealth than half of the population. That is the inherent and inevitable dysfunction of the capitalist system which degenerates into an oligarchy, not a democracy. When Biden talks blithely about “our democracies” what he really means is “our oligarchies”.

Capitalism and its inequality is the number one enemy of today’s world. That is the objective and empirical reality that is staring the world in the face. But don’t expect the American and European so-called leaders to acknowledge or even be aware of that. They’re only tinkering with a terminally broken system, for example, in proposing harmonizing corporate taxation or investing in infrastructure. Distracting from a full-on challenge to the capitalist system by an organized majority of working people is the function of Western misleaders. They’re too busy tilting at windmills and telling us that Russia and China are the enemy. That’s the tragedy of our time. But it has to stop. It can’t go on. It is unsustainable and killing our world.

Forgotten Blockbusters: Ordered Suppressed, The Other Cold War no one talks about