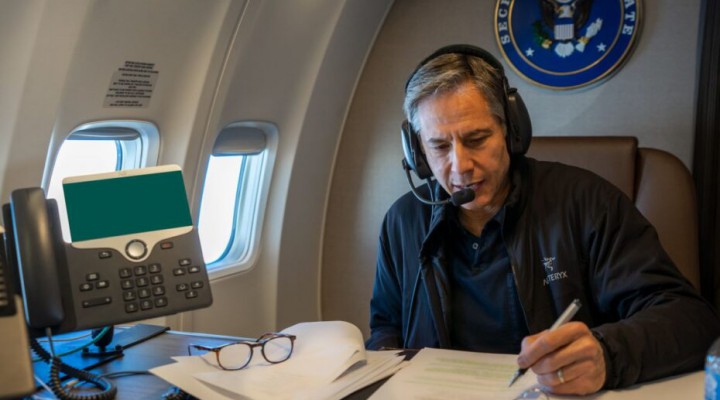 Blinken is staying close to his boss during the whirlwind tour, because Biden is liable to spin out of control and reap an embarrassing collapse.

It’s a big ask for a frail 78-year-old U.S. president to rally the world around a series of myths and falsehoods. Biden flies to Europe this week to galvanize allies under strong American leadership of supposed shared “democratic values” in a “historic confrontation” with the “autocracies” of China and Russia.

President Joe Biden’s worldview is so disconnected from reality that it is going to prove difficult mentally for him to consistently and coherently make the case over a series of summits in the next week.

That’s why he has his more youthful Secretary of State Antony Blinken (59) tagging along when Biden meets G7 leaders in England on June 11-13, followed by a NATO summit on June 14 in Brussels as well as top-level discussions with European Union leaders. After all that, Blinken is “to participate” in the face-to-face meeting between Biden and Russian President Vladimir Putin on June 16 in Geneva, according to the U.S. State Department.

The latter detail in the busy itinerary – Biden’s first overseas trip since taking office in January – is the most salient. It is unprecedented that the U.S. foreign secretary should “participate” in what was previously billed as a one-on-one meeting between the American and Russian leaders. There is no indication so far from Russian media reports that Sergei Lavrov – Blinken’s counterpart – is to take part in the Geneva summit.

What this unusual arrangement suggests is that Biden is not up to the task of dealing with Putin in an equal setting. The American president’s health and mental acuity have been under the media spotlight after several public gaffes in which Biden has forgotten names of his aides and has seemed befuddled in recalling details. The Democrat-supporting U.S. media have been criticized for giving Biden an easy time from their soft approach towards the president.

This raises further questions about Biden’s health condition when he has to have his top diplomat at his side during the forthcoming summits, especially the final one with Putin whom the American president disparaged previously as a “killer”.

It is all the more taxing on Biden given that his mission is more about contriving a narrative than actually engaging with reality. The contrived narrative is the attempt to rally European and other Western allies under American leadership against “autocratic adversaries” China and Russia. In other words, fabricating a new Cold War. The trouble is the fabrication is based on myths, falsehoods, smears, delusions, and outright lies. All in all, that’s a tall order for a president who tends to get people and names mixed up and who appears to struggle at finishing press conferences with coherent thoughts.

In an op-ed for the Washington Post before his big tour of Europe, Biden presented his mission thus: “My trip to Europe is about America rallying the world’s democracies”.

In a familiar mantra of the 46th president, he demarcated the world into two camps: one under “strong American leadership” with “shared democratic values”, and the other purportedly represented by rival “autocracies” of China and Russia. This is nothing but the recreation of a Cold War whereby Washington polarizes the world into hostile entities in order to give itself a position of “moral leadership” as a guise for imperialist hegemony.

To accept this mythical framing of the world, then it is necessary to demonize the designated adversaries. Lamentably, the European allies of America (more accurately, “vassals”) are all too credulous in accepting the provocative fantasies.

Nevertheless, sometimes self-interests intrude and the Europeans find the American depiction of the world too much to bear. Hence, there is pushback from the European Union on Biden’s attempts to sabotage the economic partnership between the 27-member bloc and China. There are limits to which the EU will go in damaging the landmark Comprehensive Investment Agreement it signed with Beijing in December.

Likewise, Germany is not tolerating any attempts by the Biden administration to scupper the Nord Stream 2 gas pipeline with Russia which will be vital for fuelling German industry. Again, self-interest kicks in to bring mundane common sense into conflict with the American mythology of a Cold War.

Notwithstanding, Biden’s itinerary is purposed to orchestrate an adversarial transatlantic position towards Russia and China.

In his Washington Post op-ed, Biden pointedly outlines how his first meetings are aimed at drumming up American leadership pitted against Moscow.

The president wrote: “So, when I meet with Vladimir Putin in Geneva, it will be after high-level discussions with friends, partners and allies who see the world through the same lens as the United States, and with whom we have renewed our connections and shared purpose. We are standing united to address Russia’s challenges to European security, starting with its aggression in Ukraine, and there will be no doubt about the resolve of the United States to defend our democratic values, which we cannot separate from our interests.”

Note the inane assertion as if fact that Russia is threatening Europe’s security and is aggressing Ukraine, when in reality it is the U.S. and NATO powers that are weaponizing a rogue regime in Kiev against Russia. The U.S. has supplied $2 billion in weaponry to Kiev since the Western-backed coup d’état in 2014 and NATO forces are on the ground in Ukraine. It is NATO forces building up offensive power around Russia, not the other way around.

Biden threw in a few bromides such as “the United States does seek conflict” with Russia, and he mentioned his extension of the New START treaty back in February (preventing an arms race is hardly a claim to virtue). But these platitudes aside, Biden went on to make lame accusations about Russia’s “interference in our democratic elections”.

It can be confidently posited that President Putin will demolish the baseless claims that Biden is attempting to put forward in Geneva. It will be an intellectual slamming match, not simply due to Putin’s formidable command of detail and argumentation, but largely because the American side has an untenable case owing to its fundamental fallacies.

Let’s just say, the American case against Russia and China is a weak charade of myths and lies, full of hypocrisy and contradiction. It would be hard enough for an agile mind to maintain the implausible narrative that underpins America’s bid for global hegemony. It’s all the more difficult for an aging president to keep up the performance.

That’s why Blinken is staying close to his boss during the whirlwind tour. Because Biden is liable to spin out of control and reap an embarrassing collapse.

The State Department said Biden will be coming from his meeting with allies with “the wind at his back” as he goes on to challenge Putin. More accurately, it should be said, with Blinken propping up the president by reminding him of the dubious script.