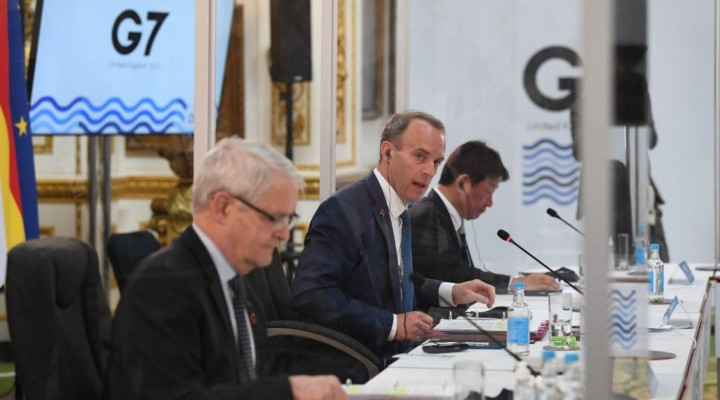 On Friday,  the G7 leaders will convene in the UK to address the major global challenges. Judging from the statement approved by the group’s foreign ministers earlier last month, their ability to deal with them effectively seems questionable – to say to least. The document conveys no momentum, nor any inspirational vision for the world.

Instead, it reveals a harmful rearguard attitude – an obsession with defending the crumbling world order and drafting prohibition lists. In other words, it reflects the usual, increasingly indefensible and outdated exceptionalism, complete with anxiety-prone tips more akin to psychoanalysis than international politics.

Even one of the institutions of the western-led international order, the Financial Times, sadly recognised that “the few who take the trouble to wade through the communique are unlikely to find a clear route map”, adding that the G7 is “a platform for rich democracies ganging up on China”.

Such a mission, it seems, is uninspiring, and most probably too late. By approving a document that includes almost everything, the G7 has succeeded only in highlighting its significant and unforgivable omissions.

It solemnly claims that this month’s meeting came “at a critical juncture for our people, our planet, our security and our future prosperity”, noting that democracy “is under pressure globally; the pandemic continues to pose acute global challenges; new technological threats are mounting; and the catastrophic effects of climate change are increasing”.

Of course, not a hint of self-criticism for such a dramatic outcome – no repentance, no accountability – is offered. It is easy to conclude from this communique that the G7 members have had no role in the mistaken policies of the last three decades, which have contributed significantly to the current situation.

On the contrary, any average observer might conclude that the multiple threats listed are just the result of the “malign activities” of the four usual suspects: Russia, China, Iran and North Korea. And they are not saints, but if the G7 wished to render them a service by magnifying their capabilities and leverage, it succeeded in full.

In the G7’s odd view, democracy is under pressure from Russia and China, rather than from the great western democracies that have failed their people via unfair policies that have generated huge socioeconomic disparities, fuelling widespread resentment, political polarisation and xenophobia.

Apparently, decades of ideologically driven, neoliberal policies that have decimated public health and social services played no role in leaving many rich, developed countries so unprepared to cope with the Covid-19 pandemic and its unprecedented human and social costs.

The only technological threats contemplated are the usual suspects’ cyber capabilities, with no concerns raised over the big-data techno-oligopoly of US mega-corporations.

On climate change, the highly welcomed western sensibility materialised only when the Global South started moving ahead with its own industrialisation, now required to submit such development to the rules of a western-conceived Green New Deal – or to face malign consequences.

Sure, the G7 hit all the right chords by committing “to strengthening open societies, shared values, and the rules-based international order”, and by stressing that “free and fair trade, and the free and secure flow of capital, data, knowledge, ideas and talent is essential to our long-term prosperity”. This is likely correct, but the words and deeds of G7 countries are vastly out of sync. Now, as its members promise to “build back better”, many legitimately doubt if they should be trusted once again.

If the group is serious in committing to “promote respect for, and protect, human rights for all individuals, regardless of where they live and whatever their identity, faith, gender, disability or race”, should it not hold its allies and friends accountable? Two countries immediately come to mind: Israel and Saudi Arabia.

In a monstrous, 12,000-word communique, would it have been so difficult to add a few more sentences on the dire situation in Lebanon and, in particular, the occupied Palestinian territories? A stern and prescient warning from the seven countries that claim to lead the rules-based world order on the ticking time bomb of Sheikh Jarrah might have helped to avoid the latest wave of violence between Israelis and Palestinians. To “build back better” should also mean to end decades of politically motivated blindness.

Russia is dismissively judged as irresponsible and destabilising, with no analysis of what went wrong post-1991 and no hint of a possible shared responsibility. Ukraine and Crimea are defined as fully Russian-generated problems, with no mention of what really occurred in the winter of 2013-14; it is thus no surprise that one of the architects of those events – arch neocon Victoria Nuland – has returned to the US State Department in a far more influential position.

The ordeal of Russian opposition leader Alexei Navalny is legitimately and correctly raised, but if even a modicum of such zeal had been shown with respect to Wikileaks founder Julian Assange’s case as well, the G7’s lecturing credentials would be far more solid.

Iran, meanwhile, is prevalently framed in counter-nuclear-proliferation terms. No attempt is made to place the issue in a wider perspective of comprehensive regional security. The G7 warns Tehran to avoid further escalation, while provocation and sabotage by other actors are ignored.

The only ray of light is the following cryptic sentence: “A restored and fully implemented [nuclear deal] could also pave the way to further address regional and security concerns, including in support of the non-proliferation regime.” Is the G7 obliquely hinting that after the Iran nuclear deal is revived, members would be willing to deal with the real elephant in the room – Israel’s military nuclear programme? Unlikely.