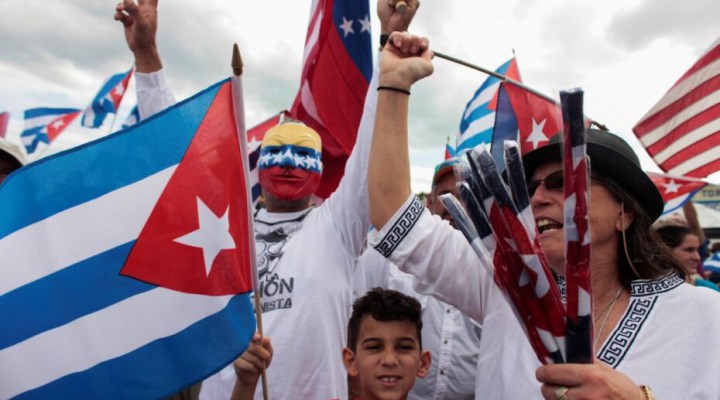 Many of the poorer immigrants to the United States from Latin America fled dictators in their native countries and the last thing they want is to see Trump proclaiming himself as president-for-life.

The U.S. political class of pundits, pollsters, columnists, and endless cable news blathering talking heads are currently putting forth the notion that Democratic presidential candidate Joe Biden is having a problem with support from the Hispanic community. This argument is based on a disingenuously false premise that the Hispanic community is a political monolith that is gravitating, as it has in recent years, to Republican candidates. To be sure, there is a conservative base to the Hispanic vote among the mostly white European exiles in South Florida, who came to the United States to flee, along with their offshore bank accounts, socialist and progressive governments that came to power after overthrowing Central Intelligence Agency-nurtured dictatorships of “caudillos” in Cuba, Nicaragua, and Venezuela.

Setting up new a political power hub in Miami, expatriate Cuban who were supportive of the CIA- and Mafia-financed Fulgencio Batista dictatorship in Cuba, established a right-wing Cuban community known as “Little Havana” in Miami. The CIA used Cuban military veterans of Batista’s armed forces Miami to recruit mercenaries for “anti-Communist” operations in Central America, Bolivia, and the Caribbean region, including the abortive 1961 “Bay of Pigs” invasion of Cuba to unseat Fidel Castro from power and the 1980s “contra” war against the Sandinista government of Nicaragua.

After the Nicaraguan dictator Anastasio Somoza was ousted by the leftist Sandinistas in the 1979 revolution, backers of Somoza moved to South Florida, where they congregated in Miami’s “Little Managua” and joined their Cuban fellow travelers in fomenting anti-progressive political movements throughout Latin America. After Hugo Chavez came to power in Venezuela in 1999, Venezuela’s European elite, fearful that political power was vested in the mixed indigenous-European population that promoted socialist policies, packed up their bank books and moved to South Florida and formed a tightly-knit community in Doral in Miami-Dade County, later known as “Little Caracas.” Smaller in numbers when compared to the Cubans and Venezuelans, exiled Colombians, many with money and some with drug cartel connections, settled in Little Havana and Little Caracas. The main reason for the Colombian immigration was to escape the violence in Colombia caused by the drug cartels that are supported by successive pro-U.S. governments in Colombia.

When Republicans talk of Donald Trump gaining support among Florida’s Hispanic community, the are referring to the mostly white European exiles of Miami-Dade. These so-called “Hispanics,” largely devoid of the indigenous native American or Afro-Caribbean ethnic roots of their socialism-supporting countrymen, support candidates like Trump because of their nostalgia for anti-democratic and fascist caudillos like Batista, Somoza, and Marcos Pérez Jiménez of Venezuela. In Little Havana, the most hated man after Fidel Castro is President John F. Kennedy, with Barack Obama in third place. Little Havana and its counterparts, Little Managua and Little Caracas are hotbeds for far-right politics and extremist politicians.

What goes largely unreported by the U.S. “news”/infotainment complex is the overwhelming support that the Biden-Kamala Harris ticket has among South Florida’s Caribbean community of Bahamians, Jamaicans, Haitians, and others from the English-, French-, and Creole-speaking Caribbean. Harris, whose father was Jamaican, has tapped into the wellspring of support from South Florida’s and the Houston, Texas region’s tightly-knit Caribbean communities.

Trump also has very little support among the Mexican-Americans of Texas, New Mexico, Arizona, Nevada, and California. They saw the Trump administration rip babies and youngsters from the arms of their asylum-seeking parents from southern Mexico, Guatemala, Honduras, and El Salvador. The Southwest U.S. Hispanic community will never forget the photographs of babies and young children of the mestizo and Mayan migrants being forced to live in cages in concentration camps established in the southern border region of the United States.

In many cases, it is incorrect to refer to Mayans and other indigenous asylum-seekers from southern Mexico and Central America as Latino, Latina, or Hispanic, since they are full-blooded Amerindians and only speak their native tribal tongues and are partly or totally non-conversant in the Spanish language, let alone English. What has forced these hapless people to the north and hopeful asylum are caudillo-run and CIA and drug lord-financed dictatorships in their home countries, particularly in the Northern Triangle of Guatemala, El Salvador, and Honduras.

Unlike the exiles in South Florida, who were gladly granted U.S. residency and citizenship, the mestizo and indigenous exiles of the U.S. Southwest had no country club memberships (including at Trump’s Mar-a-Lago club in Palm Beach, Florida), gated communities, and money-laundered bank accounts in Miami waiting for them in the United States. The average financially well-off migrant to Florida from Venezuela, Chile, Colombia, Panama, and Peru pays an average of around $450,000 for a four-bedroom home with large yards and swimming pools. That sort of affluence is certainly not the norm for immigrants in the American Southwest or Texas.

For many of the Hispanic Trump supporters in South Florida, they see Trump as serving in the Latin American tradition of caudillismo leadership, classism, and institutional racism, commonplace in the histories of their countries of origin but anathema to modern-era U.S. constitutional democracy and the rule of law.

Some 141 caudillos have occupied the presidential palaces of Latin American nations since their independence. Their kleptocratic and nepotistic rule, maintained by the power of the military and entrenched oligarchs, resulted in generations experiencing dictatorship rather than democratic rule. There was never a case of such a caudillo as president in the entire history of the United States, that is, until the inauguration of Trump.

The cultural traditions brought to the United States by wealthy white European exiles from Latin America has resulted in their largely being in lockstep when it comes to supporting right-wing Cuban-American Senators like Marco Rubio and Ted Cruz. The orders for Trump and Senators like Rubio and Cruz to push for sanctions against Cuba, Venezuela, and Nicaragua have come from the wealthy exiles in Little Havana, Little Managua, and Little Caracas in Florida. For them, it is simply the trading of their votes for a U.S. foreign policy that punishes Cuba, Venezuela, and Nicaragua.

The threat posed by Trump and caudillismo politics is not lost on Florida’s Black West Indian diaspora community. The addition of Jamaican-American Kamala Harris on the Democratic ticket has electrified the West Indian community. Those Florida and Texas voters who have roots in Jamaica, Guyana, Belize, Trinidad and Tobago, Barbados, the Bahamas, Curacao, and Haiti know all-too-well what it is like to come from countries sharing land or maritime borders with Latin American nations ruled by menacing caudillos. They want no part of Trump or his caudillismo supporters in South Florida. The political traditions of West Indian Americans is one of Westminster parliamentary democracy, not one of succeeding military tyrants wearing chests full of medals, but of judges and barristers wearing the wigs seen in every British judicial court. Adding to the anti-Trump ranks in Florida are Puerto Rican residents of the state, many of whom are hurricane transplants who have witnessed their storm-ravaged U.S. commonwealth and its people repeatedly come under attack by Trump and his administration.

Working class Hispanics in Florida, unlike the wealthy Latin American expats, worry every time they hear Trump talking about serving unconstitutional third and fourth terms as president. Many of the poorer immigrants to the United States from Latin America fled dictators in their native countries and the last thing they want is to see Trump proclaiming himself as president-for-life.