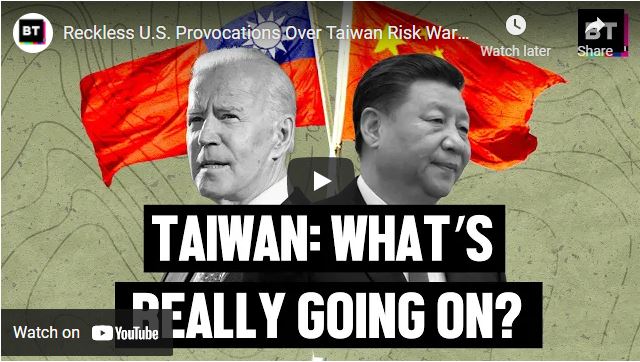 As tensions heat up over Taiwan, everything the U.S. does is depicted as defensive while everything China does is framed as menacing, aggressive and authoritarian. But the island’s history has been totally left out of the coverage.

How did Taiwan come to be? Is it part of China? How has the U.S. used Taiwan as a weapon against China both historically and today? Is there a similar situation with Tibet? With Xinjiang? With Hong Kong? Is this really about supporting self-determination and independence or part of a strategy by the U.S. to break up and weaken its greatest adversary?

To discuss this, Rania Khalek was joined by Ken Hammond, Professor of East Asian and Global History at New Mexico State University and an activist with the organization Pivot to Peace.

TIME CODES
0:00 Intro
2:04 The history of Taiwan and its relationship to China
4:53 The Chinese civil war and consequences on Taiwan
9:24 China during World War Two
11:44 Taiwan’s system of governance: Martial law until 1993
13:58 When Taiwan controlled China’s seat at the UN Security Council
18:42 What is the One China Policy and “strategic ambiguity”
23:10 US provocations: Dangerous and reckless
27:40 Hawkish elements in Taiwan
29:28 What would reunification look like?
31:25 Taiwanese intransigence as a function of US support
35:04 China’s behavior vs Washington’s: Who’s the aggressor?
37:52 Is Biden’s China policy different from Trump’s?
40:18 What’s really behind Washington’s anti-China policy?
43:43 Are there mechanisms for de-escalation in case of a military confrontation?
47:42 When the CIA trained Tibetan terrorists
56:21 US policy to balkanize China
1:00:48 The US cannot escape from its decline
1:03:44 Cold War politics in academia