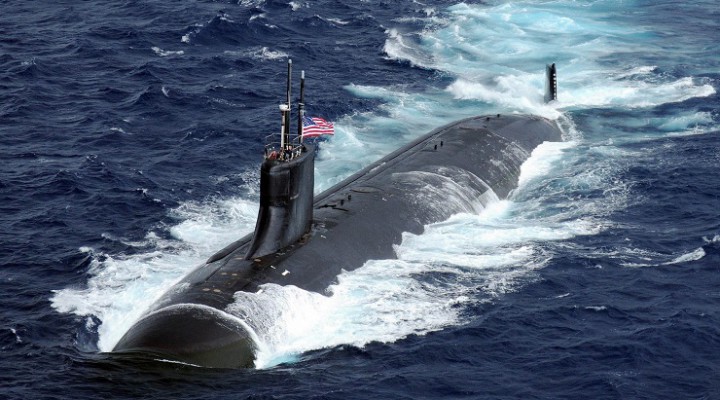 Amid growing tensions in the South China Sea between the United States and China, and especially because Washington accuses Beijing of acting irresponsibly in these waters thousands of miles from America’s own shores, an incident involving a US nuclear-powered submarine there could pose as a potential turning point – or at least a warning sign ahead of one.

The USS Connecticut, a Seawolf-class nuclear-powered fast attack submarine commissioned in 1998, was involved in a collision in the South China Sea. Despite how concerning a collision of any kind involving a nuclear-powered submarine is, the United States has released relatively little information about what happened.

An official statement posted on the US Navy’s website read:

The Seawolf-class fast-attack submarine USS Connecticut (SSN 22) struck an object while submerged on the afternoon of Oct. 2, while operating in international waters in the Indo-Pacific region. The safety of the crew remains the Navy’s top priority. There are no life threatening injuries.

The submarine remains in a safe and stable condition. USS Connecticut’s nuclear propulsion plant and spaces were not affected and remain fully operational. The extent of damage to the remainder of the submarine is being assessed. The US Navy has not requested assistance. The incident will be investigated.

Regarding the incident itself then, there isn’t much to tell at this point. What is worth examining is how the governments and the media are handling it, both in China and in the West.

Incidents regarding a nation’s military are understandably sensitive issues, and those involving nuclear-powered submarines built specifically for secrecy and stealth even more so. For a nation conducting itself upon the global stage within the framework of international law, capitals around the globe might accept the US Navy’s statement and its lack of specifics based on these grounds.

The United States, however, does not operate within the framework of international law, it operates above it. By doing so, in the 21st century alone, it has encircled, starved, attacked, invaded, occupied, and destroyed multiple nations around the globe with many more on a long and growing waiting list.

This list includes China, a nation already under US sanctions and blacklists economically, and subjected to political interference and even state-sponsored separatism in Hong Kong, Taiwan, Tibet, and Xinjiang. China is also faced with a massive US military presence in Asia including all the way up to and even onto its shores – with US Marines and other US special forces admittedly operating in Taiwan in violation of Washington’s own recognition of the “One China” policy.

Considering what the US has done globally in the past two decades of this century to other nations and what it is openly doing to China to set the stage for yet more conflict, little of what the US Navy says in regards to the USS Connecticut can be believed without actual evidence and a greater degree of transparency.

Chinese state media through the Global Times’ editorial board in a piece titled, “USS Connecticut collision info in S.China Sea must be disclosed: Global Times editorial,” would explain:

The exact collision spot and what the submarine hit are information that the US must release publicly. Otherwise, it will mean that the US has done something unconscionable such as moves that violate international law and seriously infringe on other countries’ interests in the South China Sea. Whether the collision caused nuclear leakage and environmental damage is directly related to the interests of the region. The US should give a credible answer while regional forces should verify it based on the information provided by Washington.

While the Global Times piece is perhaps overly dramatic and likely to be dismissed by many as politically-driven, the op-ed is ultimately built around an undeniable objective reality.

The US claims that its military presence in the South China Sea is aimed at “protecting” trade routes (despite most of that trade being to and from or benefiting China). The US also claims its military is there to protect claimants in the region it accuses China of bullying and endangering.

Yet the US is operating nuclear-powered vessels in this same region, and – while collisions are not unheard of – a nation claiming its presence in the region is to make it safer isn’t doing so through a lack of transparency regarding such incidents.

To prove this point further, even the Western media has noted the lack of transparency and troubling nature of how the US Navy disclosed the incident.

In incidents like this, the first reports are almost always wrong. While the mishap certainly seems like an accident, the location, circumstances and the tardy US announcement is concerning. The Navy—or the Pacific Fleet—held this news without alerting the rest of the US government, then Navy leaders need to explain the reasons behind the notification delay.

Would anyone argue that this lack of transparency makes the South China Sea safer? Not if they were being honest.

The US is in fact making the region more dangerous and more unpredictable. Not only does it make the security environment more dangerous amid already ongoing tensions, trade through the surrounding waters is also made more dangerous by a US Navy operating there with zero transparency and zero accountability.

The US cannot have it both ways. It cannot maintain secrecy in order to provoke and menace China off its own shores, and also claim to be making the waters off China’s own shores “safer” by doing so. It is trying to maintain secrecy regarding its war vessels operating in the region specifically to maintain a strategic advantage should its provocations quickly evolve into armed conflict.

The circumstances surrounding the USS Connecticut’s collision remain, at the time of writing, a mystery. But how the situation was handled by the US Navy and US government demonstrates to the region that US strategic advantage takes precedence over the supposed protection of the region the US claims it offers potential partners.