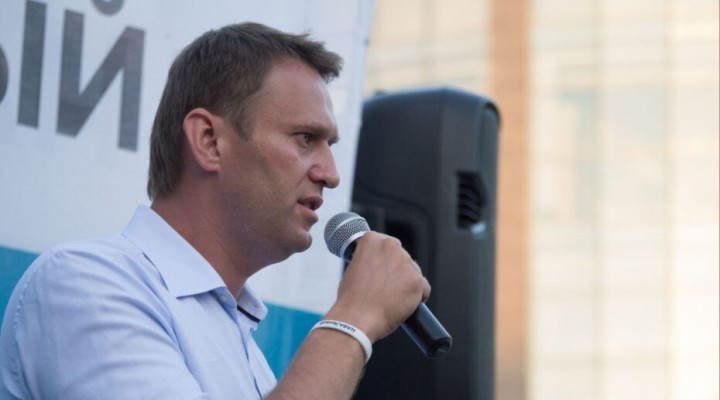 Arrogant and overindulged Navalny evidently feels above the law, like many of his Western backers.

Russia’s federal prison authorities were right to jolt Alexei Navalny this week by warning him to return immediately from Germany or else face a suspended sentence being made into jail time.

The “professional” opposition activist claims to be convalescing in Germany after he was allegedly poisoned by a Soviet-era nerve agent in August. Western news media dutifully repeat the claim that Navalny is “recuperating” in Germany after having survived an assassination plot by Kremlin agents. Navalny has personally accused Russia’s President Vladimir Putin of ordering the alleged hit.

Last week, a team of medics from the Berlin hospital where Navalny had been staying published a paper in The Lancet medical journal in which they claimed he had been poisoned with Novichok nerve agent. Their findings are dubious because the medics acknowledged the involvement of German military intelligence laboratories in conducting their analysis.

But one thing the German doctors did let slip was that a 55-day follow-up check on Navalny ascertained that he had made a “near-complete recovery”.

The Russian dissident figure was flown to Berlin on August 22, two days after he was treated in a hospital in Omsk, Russia. Thus, the German medical team are indicating – no doubt inadvertently – that Navalny’s health recovered nearly two months ago, if not before that.

That means there is no medical reason why he should remain at large in Germany. His claims of “convalescing” and the Western media’s indulgence of those claims are false, if the German doctors are correct about his “recovery”.

Despite Navalny’s arrogant disdain for Russian state laws, he is nevertheless answerable to those authorities as a citizen. While in Germany he was on probation for a suspended jail sentence concerning a fraud conviction in 2014. His so-called Anti-Corruption Foundation (FBK) has a checkered history of shady financing, from allegations of foreign funding by the U.S. State Department to charges of embezzling millions of dollars. Ironically, the blogger and media activist produces slick programs accusing the Russian government of corruption.

In any case, under the laws of the Russian Federation, the 44-year-old Navalny was on probation during the past four months of his stay in Germany. For the last two months, he is in good health, according to his German doctors. So there are no grounds for why he should abscond from Russian territory and evade the laws for which he is answerable.

Not only is Navalny living as if he above the law, he has also shown flagrant contempt for the Russian authorities.

Last week, he published a video on his website claiming that he had pranked a named member of Russia’s security service, the FSB, into admitting that agents had poisoned him while he was visiting the Siberian city of Tomsk on August 20. He was later flown in an emergency to Omsk where he was treated after having apparently fallen ill onboard a flight to Moscow.

The FSB dismissed Navalny’s prank telephone claim as a “deep fake”. The Russian doctors who treated him in Omsk – and who probably saved his life – have repeatedly stated that their tests showed there was no poison in Navalny’s body, and specifically no traces of nerve agent. They said his illness was due to a metabolic disorder. Perhaps self-induced as a ruse to later transfer to Germany?

The transcript of Navalny’s purported prank call to the FSB agent reads like a comic set-up. Posing as a senior member of Russia’s national security council, Navalny affects to bully the supposed agent as if he is a pathetic stooge.

A telling segment is where the self-styled super sleuth fishes for compliments about his own character from the purported FSB man, betraying the narcissism of a megalomaniac.

Again, incredibly, we are expected to believe that someone who had a near-death experience with a lethal nerve poison and who is “convalescing” still in Germany somehow managed to find the energy and mental reserves to pull off a daring 45-minute telephone sting.

If Navalny is fit enough to participate in such practical jokes – regardless of their credibility – then he is surely fit enough to abide by Russian laws and respect his probation terms. As the Russian Federal Prison Service stated this week: “The convicted man is not fulfilling all of the obligations placed on him by the court, and is evading the supervision of the Criminal Inspectorate.”

One gets the unerring impression that Navalny and his foreign handlers have become so self-intoxicated with hubris that they are blind to their own absurd implausibilities.

Why was he permitted to fly by air ambulance to Berlin in the first place if the Russian authorities had evil designs against him?

While there, as a guest of the German government, Navalny has wildly accused President Putin of ordering his alleged assassination. The European governments have subsequently and rashly imposed sanctions on Russia in support of Navalny’s unfounded claims. Then we have the media activist mounting further provocations parlayed into even more outlandish accusations against President Putin and the Kremlin.

All the while there has been no evidence of poisoning presented to support these claims, other than unverifiable assertions by German doctors working with German military intelligence labs, as well as two other NATO laboratories and the Organization for the Prohibition on Chemical Weapons. All of them including the OPCW (the latter compromised over complicity in NATO false-flag provocations in Syria) have refused to share their analytical data and samples with Russia, and yet they are demanding that Moscow launch a criminal investigation into the Navalny case.

The abdication by European governments of due process and of respect for Russian state laws, its government, and its president is astounding. They are indulging a foreign-sponsored gadfly as if he is the sovereign representative of the Russian Federation.

Navalny and his foreign allies have lost the plot in their own telling of an alleged assassination plot.

First things first: he is a convicted felon who is answerable to Russian law. Pushing false flags and slanderous falsehoods from abroad with the intent of damaging Russia’s sovereignty is an abuse of his rights.

Arrogant and overindulged Navalny is patently incapable of even understanding his obligations under law as a Russian citizen. He evidently feels above the law, like many of his Western backers. That’s why Russia is right to tell him to put up or shut up.