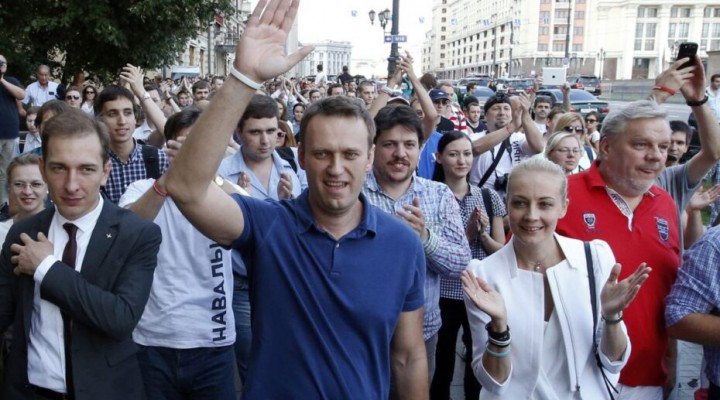 So now the Navalny poison episode takes on a new twist with German military intelligence subsequently claiming they found traces of Novichok on a bottle of water the Russian dissident had purportedly been drinking from. Rather, it sounds more like the authors of this false-flag operation have “bottled” – meaning became unnerved by the absurdities inherent in their own narrative.

Last week the German government announced that a Bundeswehr military laboratory had detected Novichok in the body fluids of Sergei Navalny. That promptly led to charges that the Kremlin was responsible for the attempted murder of Navalny using the Soviet-era nerve poison.

The trouble for the German side was that their narrative soon ran into contradictions from the Russian toxicologists who first treated Navalny when he apparently fell ill on a flight from Siberia to Moscow on August 20. The Russian medics said they had tested Navalny for a whole range of poisons, including organophosphate-type chemicals which attack the nervous system. The Russian doctors affirmed they found no poison traces. They concluded Navalny’s coma was induced by an existing medical condition, presumably diabetes. Furthermore, the doctors at the hospital in Omsk where Navalny was taken to on August 20, said they have original samples of his body fluids.

It’s the latter detail which seems to have obliged the Germans to elaborate their narrative with the new element of a poisoned bottle of water. If indeed the Russians have Navalny’s biological samples showing no presence of toxins then the German version falls apart as a fabrication. That could only mean that the claimed detection of Novichok by the Germans was the result of deliberate contamination of his body fluids while he was being treated in the hospital in Berlin where he was airlifted to on August 22 from Russia.

It is reported by Der Spiegel that Navalny’s family relatives kept the alleged bottle after he fell sick on the flight from the Siberian city Tomsk. They purportedly did not hand the bottle over to the Russian toxicologists in Omsk, but rather provided the bottle instead to the Germans when Navalny arrived in Berlin two days later.

This “bottle twist” is a convenient and necessary foil to avoid the potentially damning contradiction from the Russian side. The Germans can now claim to have evidence that was not available to the Russians.

But such a ploy creates more questions that still make the German narrative implausible, if not absurd.

If Novichok was used in poisoning Navalny, the 44-year-old dissident would most likely be dead by now. Also, the aides and flight attendants who came into close contact with him during his flight would have shown symptoms of poisoning. It is inconceivable that a bottle contaminated with the deadly nerve agent could have been transported by Navalny’s family to Germany without them being stricken.

The strange Navalny affair has an unerring resemblance to the equally outlandish Skripal affair. Yet the latter is cited as a precedent for the former in order to “substantiate” incrimination of Russia. The alleged Novichok weapon seems to have an amazing ability to lose its deadly potency on bystanders. The immediate victims apparently go into mysterious comas and are not seen or heard of again in public, detained in secret by the British and now German government. There is also the curious introduction of bottles in both cases: the perfume bottle which allegedly conveyed the Novichok weapon in the Skripal incident in England in March 2018, and now the water bottle in the Navalny incident.

Immediately following reports of alleged German detection of Novichok in Navalny’s body, there were predictable calls for the cancellation of the Nord Stream-2 gas project between Russia and Germany. It is no secret that pro-Washington German politicians have long been opposed to the ambitious energy trade with Russia.

German Chancellor Angela Merkel has up to now been resolute in wanting Nord Stream-2 completed in spite of immense pressure from the Trump administration and the U.S. Congress to abandon it. The American agenda is transparently to replace Russian gas energy supplies with American exports.

Navalny’s apparent poison-assassination fits neatly with this strategic American agenda. Given the allegiance of German military intelligence and certain politicians to the transatlantic axis it is not difficult to conceive of how a false-flag provocation against Moscow could be orchestrated.

The problem is that in their haste to set up Navalny as a victim in order to sabotage Nord Stream-2, the authors overlooked the unfortunate anomaly of Russian doctors potentially disproving the claim of detecting Novichok in Navalny’s body. Realizing their clumsy mistake, the authors are obliged to invent another twist in the story involving a contaminated water bottle. In terms of credibility, however, their invention doesn’t hold water.

This has grave implications for the survivability of Navalny. As an opposition figure long lionized and exaggerated by the West as the nemesis of Russian President Vladimir Putin, Navalny is more valuable dead than alive as a propaganda weapon. With its false-flag narrative failing, the temptation may be to up the ante dramatically by amending the script of Navalny “succumbing” to Novichok.