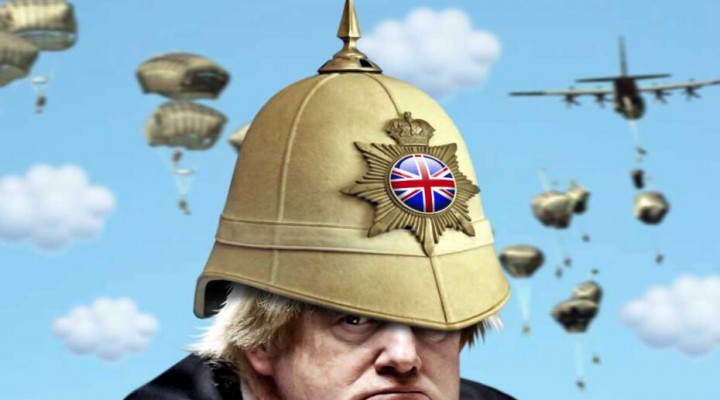 Johnson’s irredeemable clownish antics are being seen as an election loser and Britain’s Conservative party is notoriously ruthless when it comes to pushing lame leaders out the window, Finian Cunningham writes.

The con-job that is Boris Johnson looks to have run its course as the British Conservative party draws the knives to get rid of this bungling prime minister.

The griping and backstabbing from Tory parliamentarians is shredding Johnson’s leadership authority. Even normally supportive British media have become openly derisive about his increasingly shambolic performance.

For several weeks now, Johnson has been making one gaffe after another with more frequency than his usual casualty rate. He is embroiled in a seemingly endless scandal over his Tory party being up to its eyes in corruption and sleaze with the leader of the party himself – Johnson – also implicated and turning a blind eye. Several lawmakers in the Conservative party have been earning more salaries double-jobbing as lobbyists for private firms than they do as parliamentarians.

Other more conscientious Tory MPs are rebelling against a government that is seen as aloof and callous amid economic misery and Covid pandemic mishandling. Johnson’s messy hairstyle looks less like that of a rakish wag and more like that of a tired old scarecrow who doesn’t impress any more.

He’s even admitted recently to giving “car crash interviews” to media and a Downing Street spokesman was obliged to assure reporters this week that the “prime minister is well” which only fuels further speculation that Johnson is undergoing a personal psychological implosion.

The latest sign of mortal political trouble was Johnson’s cringe-making speech in front of British business leaders. He was seen by the embarrassed audience verbally stumbling all over the place during his address, making incoherent noises and – for a squirming 20 seconds – not being able to remember what the point of his rant was. He fumbled through his notes, cursing under his breath.

Then the nadir in nonsense came with Johnson’s eulogy for a cartoon character, Peppa the Pig, which he cited as supposedly epitomizing the dynamism of British business. Can you imagine Russia’s President Putin referring to Masha and the Bear in one of his set-piece speeches and how Western media would scoff at that?

Such cartoon-referencing is, however, this British prime minister’s stock-in-trade flippancy on otherwise sober occasions where his rhetoric sounds downright corny. But the latest star-turn in unintentional comedy by Johnson – precisely at a time when Britain is looking for statesman-like leadership amid turmoil – betrays someone who is completely out of his depth in understanding issues or of having any self-awareness. In British slang, he is seen as a stupid git with a posh accent.

Back in September, when Johnson stood at the podium of the United Nations General Assembly, he delivered a supposedly earnest appeal for global action to mitigate adverse climate change. Delegates were astounded to hear the British leader invoke Kermit the Frog from the American cartoon series The Muppets in a speech imploring the need to “go green”.

Then during the massively hyped COP26 climate summit at the beginning of this month, hosted by the United Kingdom, Johnson tried to convey the urgency of international action by comparing the task for humanity to “James Bond defusing a doomsday bomb”.

After a while, this vaudeville act by Johnson goes beyond mildly funny to tedious, and then subsequently becoming – as it is now – alarmingly imbecilic. As one senior Tory politician told Conservative-supporting The Times this week: “This is amateur hour at the London Palladium.”

The 57-year-old British premier was formerly a columnist for The Telegraph and Spectator, both rightwing Tory-supporting publications. Former colleagues relate how Johnson was an inveterate laggard who always missed his weekly work deadlines. He would make up for his incompetence by spinning colorful columns at the last minute that sailed close to the wind of outright lying. As a Brussels-based correspondent, Johnson fueled anti-European Union politics in Britain – which culminated in Brexit – by peddling outrageous claims of the EU overrunning British sovereignty and independence. The irony is Alexander Boris de Pfeffel Johnson – his full name – is a scion of European aristocracy who played the British populist card for his own political aggrandizement.

He became the British Foreign Secretary in the government of David Cameron. It was Johnson who took the lead in propagating the Skripal-Novichok affair in 2018 as an alleged assassination attempt ordered by Russian President Vladimir Putin. Moscow has repeatedly dismissed the claims as preposterous. Johnson then went on to ludicrously compare the 2018 Football World Cup in Russia to the 1936 Olympic Games in Nazi Germany.

Capitalizing on this elite upbringing and education at Eton College and Oxford University, Johnson has a knack for covering up his dubious intelligence by reciting quotes in Latin and references to ancient Roman or Greek philosophers. But the pseudo-eruditeness is all part of the con-job that is Boris Johnson.

This is a prime minister who equates world affairs with cartoon characters because he is virtually one himself. Johnson seems to think it’s jolly good fun to order British warships into Russian and Chinese territorial waters as a supposed display of modern “Global Britain”. He has no awareness of the grave dangers from such puerile saber-rattling. Yet at the same time, this buffoon in 10 Downing Street seems to arrogantly assume that his reckless provocations can be easily set aside as piffling matters when needs be. In spite of Britain’s offensive military conduct he presumes he can cut big trade deals with China and Russia.

The problem for Johnson is that his foibles and fables were something he could capitalize on when he was a rising star as a journalist and during the Brexit campaign five years ago. But now as prime minister and leader of the Tory party, his irredeemable clownish antics are being seen as an election loser. He may have won the last general election in 2019, but since then his grandiose promises have been shown to be a charade.

Britain’s Conservative party is notoriously ruthless when it comes to pushing lame leaders out the window. Margaret Thatcher – the Iron Lady – who won three elections as Tory leader (1979-1990) was swiftly dumped by her party when she came to be seen as a hate-figure by most British voters.

Boris Johnson is heading for the same brutal exit.

Sleazy Does It Boris