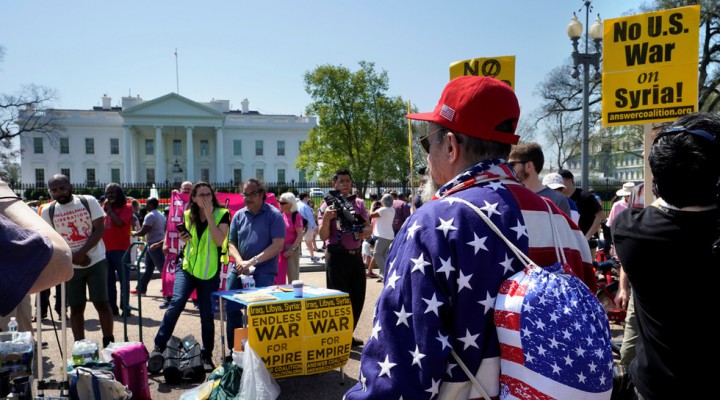 Although Western media has a shoddy track record of lying on Syria (and Libya, Iraq…), the US State Department will pump $35 million more into future war propaganda on Syria, under the guise of promoting honest reporting.

A US State Department grant, “Support for Independent Media in Syria,” is unabashed in stating one of its main goals is “to advance U.S. Government policy objectives in Syria.”

That is probably the sole honest clause in the grant description: that it is in the end about US self-serving, hegemonic objectives in Syria.

The description goes on to claim these goals include the defeat of ISIS—although the illegal US-led coalition has attacked Syrian army positions on numerous occasions, ensuring the advance (not defeat) of ISIS in those areas. One of the most glaring instances being the September 2016 repeated attacks on the Syrian army in Deir ez-Zor province, which saw ISIS take over the region.

The US assassination of Iranian General Qasem Soleimani, recognized in the region as the man responsible for the near-defeat of ISIS, is another notable example of the US goals being to prolong, not defeat, ISIS in the region.

With their grant, the US plans to “advance human rights and promote tolerance and dialogue between ethnic and religious communities,” which is again morbidly laughable given that the US has been supporting wahhabi and other extremists whose human rights track records include caging, torturing, raping, and starving civilians, and public executions.

It wouldn’t be American policy if the State Department grant didn’t include mention of countering “Russian disinformation” and ending the presence of “Iranian forces and proxies in Syria.”

However, removing Iranian forces isn’t within America’s right to do; Syria invited Iran, Russia and other allies to actually fight terrorism in Syria, as opposed to the US-led occupation forces. And as discussed, it isn’t Russia that has the track record of disinfo on Syria, that honor goes to America and allies.

Western outlets in chorus promoted the accusations of Syria/Russia preventing food and aid into eastern Aleppo (even Reuters reported“rebels” had stockpiled aid) and Madaya and eastern Ghouta (none was true). Western media sold the story of Russia/Syria bombing the home of Omran Daqneesh (didn’t happen), of the al-Quds hospital being “reduced to rubble” by Russian/Syrian bombing (didn’t happen), and a litany of other grotesque war propaganda stories.

Suddenly we’re meant to find credible journalists who embed with al-Qaeda and whitewash their crimes, and media which have on many occasions used photos not even in Syria to accompany sensationalist war propaganda stories.

CNN and western media got it wrong about Omran Daqneesh, but I haven’t even seen any retractions for this lie.

And yet the US wants people to believe that the independent voices and Russian and Syrian media who actually reported factually and honestly on these and other issues…are not credible.

The US wants people to live in a fake news bubble, where the narratives are controlled by the war mongers. And, strangely, America seemingly wants Syrians to be subjected to media that reports opposite of the reality they are living. As if after nine years of enduring Western (and Gulf) media’s lies Syrians will suddenly believe them and decide to overthrow the president they elected (and support)? America is grasping at straws…

In April 2018, Western media pounced on and promoted the White Helmets’ lies, shedding crocodile tears over civilians allegedly exposed to a chemical agent, at the same time ignoring or mocking the testimonies of 17 Syrians from Douma (including the boy starring in the White Helmets’ hoax video).

Turns out the body tasked to examine this accusation omitted from its final report key findings that poke massive holes in the (West’s) official narrative around Douma. Not one, but many revelations have been leaked about the critical omissions of the OPCW  report.

The only ones taking this seriously are mainly Russia, Syria and independent researchers. In the face of these recent revelations, most Western media have largely thus far been silent.

Similarly, Western media didn’t cover the December 2018 panel detailing damning findings on the White Helmets’ association (and membership) with terrorist groups in Syria, and their involvement in staging chemical attacks and in organ harvesting…

In the State Department’s quest for truthful reporting, one of the issues to be protected seemingly at all costs is of course the White Helmets (and the chemical hoaxes they help stage).

Anyone who has seriously researched the White Helmets, much less bothered to interview Syrian civilians about the fake rescue group, knows their footage and claims are as credible as the words of nurse Nayirah, Colin Powell, or the entries of Wikipedia.

Journalists who bothered to interview medical staff in Douma following the chemical hoax were told that doctors were treating patients with normal wartime injuries when “strangers” (including White Helmets members) entered yelling about a chemical attack, creating a panic (and demonstrating a lack of medical skills), and filming the scene with then 11 year old Hassan Diab.

Diab was one of the Syrians dismissed by western media when he testified to the OPCW that he had not been subject to a chemical attack but had been used by the White Helmets. For Western media, only some children are credible (exploited)…when it suits their narrative.

One such youth, Muhammad, gained notoriety when eastern Ghouta was being liberated. Like the Aleppo child Bana before him, the Ghouta teen had an account in his name on Twitter (the dodgy logistics of which I raised in my last article) and was busy parroting the accusations.

Incidentally, Ghouta (to the silence of media which claimed concern in 2018) is rebuilding, in peace.

In any case, I get the feeling people are tired of lying Western media, chemical hoaxes and the antics of the White Helmets. I certainly see propaganda apologists getting called out on Twitter more than prior, and people are extremely skeptical of chemical weapons accusations.

As Vassily Nebenzia said of the OPCW official report on Douma: “Humpty-Dumpty, as we know, “sat on a wall, had a great fall and all the king’s horses, all the king’s men, couldn’t put Humpty together again”. I mean, that is exactly what happened to FFM report. Exactly.”