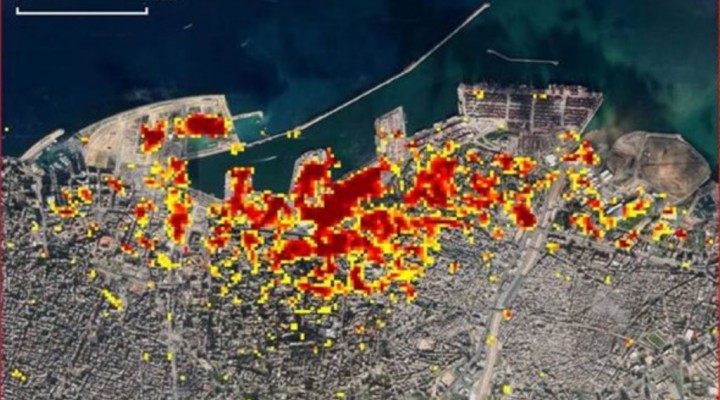 “Hezbollah controls the Harbour of Beirut and is knowledgeable of everything happening in it. It uses its influence to smuggle its shipments through and prefers to keep these shipments at the harbour to prevent Israel from bombing them.”

“Hezbollah controls Lebanon and forced the choice of General Michel Aoun as a President and of Hassan Diab as a Prime Minister. Moreover, through its influence in the parliament and the cabinet, it is enforcing the protection of its arsenal and of its presence as a powerful armed organisation”.

“Israel will use its influence to prevent any financial support from reaching Lebanon unless it is conditioned on the disarming and dissolution of Hezbollah and prevention of its participation in the forthcoming Lebanese government”.

“The international community should prevent Iran from helping Lebanon to reconstruct its infrastructure or to offer financial support to the country; it should keep tight control over all cash flows reaching the government.”

“The international community should prevent Iran from taking advantage of the weakness of Lebanon and stop it from helping the Lebanese.”

Israeli media, military analysts and official commanders commented in these terms on the Beirut harbour explosion of 4th August. The explosion was caused by negligence and lack of regard for public safety. 2,755 tons of Ammonium Nitrate (AN) – classified as dangerous goods– were left at the harbour in 2013 while local officials and judges threw the ball of responsibility at one another until it exploded. The AN (NH4NO3) widely used as fertiliser but is also a component in many types of mining explosives if mixed with fuel oil or detonated by an explosive charge.  AN does not burn on its own but acts as a source of oxygen to accelerate the burning of other materials. It is the rapid release of gases that causes an explosion if an intense fire ignites nearby. This is indeed what happened: at Beirut harbour, several tons of ignited combustible materials were left and firefighters tried to control the fire that had started an hour before someone realised it.

Israeli Foreign Minister GhabiAshenazi said “Hezbollah is acting in urban and populated territories and using Lebanese citizens as human shields as we saw in the unfortunate event last week. Hezbollah is responsible for the explosion of the harbour.”

Israeli Prime Minister said, “in order to avoid disasters like the one at Beirut port, we have to confiscate the explosives and missiles that Hezbollah has hidden in civilian population centres in Lebanon.”

Most Israeli officials and analysts concluded that Hezbollah is much weaker today and, therefore, should remain outside the forthcoming government. They considered the resignation of Prime Minister (now caretaker) Hassan Diab as a positive step for Israel because he was leading a “Hezbollah cabinet”.

Israeli officials called “for the rapid formation of new government excluding Hezbollah so Diab doesn’t remain for long as a caretaker.” It seems the general opinion among experts in Israel is that the political power in Lebanon will definitely change in favour of Israel’s objectives in Lebanon and the Middle East.

There should be grave doubts regarding the Israeli assessment, which is superficial and indicates little knowledge of Lebanese internal dynamics. Most of what the Israeli media and analysts said is taken from the Arabic and Gulf media hostile to Hezbollah, expressing wishful thinking and part of their general anti-Hezbollah propaganda.

Significantly, Israel’s own intelligence reports undermine the general conclusions of these analysts. They say, in no uncertain terms, that “no adequate options are available to indicate Hezbollah’s position has been weakened. All previous attempts have so far failed to isolate Hezbollah and to undermine its power.”

Israeli media analysts, like many Lebanese and Arab leaders and writers, failed completely to explain how a weak country like Lebanon could disarm Hezbollah, “one of the strongest armies in the Middle East”, according to Benny Gantz. Hezbollah is considered the only protector of the south of Lebanon against Israel’s ambitions and the defender of the Lebanese oil and gas rights in the Mediterranean. The US and Israel called for the disarmament of Hezbollah but offered no means for the Lebanese army to protect itself against over 53 monthly Israeli violations of Lebanon’s air, land and sea territories.

It is strikingly obvious that the Israeli demands, and those of the international community, coincide exactly with those of a few Lebanese political leaders, notably the Christian Leader Samir Geagea, the former ally of Israel and the leader of the “Lebanese Forces”, and with those of other politicians allied to Saudi Arabia.