HOME / WORLD / The Kurds’ choices:”No Friends but the Mountains… and Certainly not Israel.” 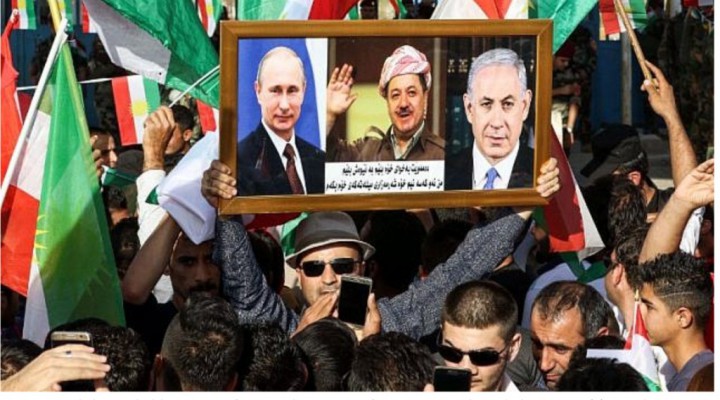 Many states have used the Kurds (who maintain the same language and cross-border relationships with other Kurdish tribes in Iran, Iraq, Syria and Turkey) throughout modern history –– as a weapon against various Middle Eastern countries. This continues to be the case, especially following the US invasion of Iraq and the occupation of north-east Syria where the Syrian Kurds’ dominant group, the YPG (that is the Syrian branch of the US-EU enlisted terrorist group the PKK) is based. But the Kurds in Iraq, Syria, Iran and Turkey are not homogenous groups, and their fate and loyalties are also differentiated.

Notwithstanding a unique dream that would bring all the Kurdish populations together and the hope that Washington would help fulfil this dream, the US support to the Syrian and Iraqi Kurds will definitely not lead to this vision’s materialisation – the cost is too high. Even if the US wanted to give a state to the Kurds and “reshuffle the Middle East”, the countries concerned could unite and prevent Washington from achieving that desired goal. The Kurdish relationship with Israel will serve little to change the Kurdish status in the Middle East. The question remains, when will the Kurds, acting as the US’s shield in Syria and Iraq, understand that their “only friends are (still) the mountains” and that neither the US nor Israel can protect them and that only the countries where they have planted roots (and certainly not Israel) – can be their protection from future persecution, and are their only salvation?

The Israeli normalisation with Arab states relieves the Kurds from the burden of the need to withhold secret ties with Tel Aviv. The Iraqi Kurdish leader Masoud Barzani already said he “has no objection to establishing diplomatic relations with Israel”, even if foreign policy is the competence of Baghdad’s central government, which rejects the idea. Kurdistan province is part of Iraq and will face severe consequences if daring to move overtly towards Israel. Also, the Iraqi Kurdish leaders need a good relationship with the Arab countries, Iran and Turkey. They are not in a position to jeopardise that for the sake of public relations with Israel which can continue without necessarily being vaunted.

To trigger western solidarity and compassion towards the Kurds, Israel is pushing the narrative that emotional links between the Kurds and the Jews exist due to” the injustice they both experience”. However, the Israelis (not the Jews) have exerted the most unspeakable mass killing, abuses and genocides against the Palestinians since 1947, and are accused by the UN of war crimes and crimes against humanity, and continue to wage wars and harass nearby Middle Eastern countries. They commit indiscriminate attacks and war crimes in Lebanon and Syria, bombing Iraq and carrying out unlawful assassinations in Iran and elsewhere, violating international laws. The Kurds flirt with Israel to boost their position with the US. The Israeli lobby enjoys a potent influence within the US administration and largely “controls” the mainstream media, or so it is widely believed in the Middle East. And Israel supports the Kurds because these can bring instability to their enemies and opponents in Iran, Turkey, Iraq and Syria: they represent a useful operational foothold for Israel.

When the Kurds revolted against the host country they lived in, in ancient and modern history, and their revolt was unsuccessful, they crossed the unguarded borders into a neighbouring state. They took shelter with the Kurdish tribes living in that country. Now the Kurds are mainly but not exclusively gathered in Iran, Turkey, Iraq and Syria. When the “Islamic State” (ISIS) was about to occupy Ain al-Arab (Kobane), the US asked and obtained Turkey’s permission to send a Peshmerga force through the Turkish territory to prevent the fall of the Syrian city.

The Syrian Kurds played a positive role in helping Nubbl and Zahraa’s cities face the siege imposed by al-Qaeda. In exchange, the Syrian army and its allies offered support to the Kurds in hay Maqsoud in Aleppo during the war. When Turkey attacked and occupied the Kurdish city of Afrin, a large number of the Kurdish population found in Nubbl and Zahraa a warm welcome and shelter. However, the relationship between the YPG and Damascus changed when the US encouraged the YPG to leave Afrin to Turkey rather than Damascus and to extract the oil, sell it to the Syrian government (Iraq and Turkey) and prevent the abundant agricultural wealth in the Kurdish area from reaching the rest of Syria.

The YPG Kurds deployed in al-Hasaka, Raqqah and Deir-Ezzour provinces have grabbed the opportunity to act as a shield for the US occupation forces in the hope of having a state of their own under the name of “Rojava”. Turkey, a nearby country, joined the US and Europeans in listing the Syrian Kurds YPG (People’s Protection Units) and the PKK (Kurdistan Workers’ Party) Syrian branch, a terrorist organisation. Ankara’s soldiers prevented the YPG from having their Rojava by occupying Afrin, and other Syrian cities in the Arab-Kurds northern provinces, to the discontent of the US and western forces deployed north-east Syria.

However, the US and some western countries have their forces on the ground without a UN or the Damascus government’s mandate. As a consequence, the western troops are considered occupation forces. The Kurds don’t mind acting as a shield to the US and other western troops in the hope of remaining in control of the Syrian territory for as long as the US and its allies are stationed in Syria, illegally. The YPG leadership hop the US will stay for many years in Syria and allow the Kurds to become stronger and even challenge Damascus’s central government.

Sources in al-Hasaka confirmed that the YPG Kurds enjoy an excellent relationship with the US and Israel notwithstanding the US and the Israeli Mossad’s assistance (officially denied) in monitoring the movement that led to capturing the PKK leader, Apo Abdullah Öcalan, in Kenya in 1999. The PKK leader was a former Marxist (at its fifth congress in January 1995). The PKK removed the hammer and sickle from its flag because it believed that Communism had collapsed and that it is the US that represents development. Öcalan was allowed a training camp in the Lebanese Bekaa Valley in 1991 and was openly anti-Zionist and in full support and harmony with the Palestinian cause. The PKK leader was against building a Kurdish nation-state. He said: “the Kurdish nation-state will bring massacres, like the second Zionism…It was established so that it could be used against Iran and Turkey. I tried to prevent this.”The Syrian YPG (and the Iraqi Kurdistan Regional Government – KRG) wrongly considers Israel a bridge to the “Great Kurdistan”. The Kurdish-Israeli relationship goes back to 1931 with Reuven Shiloah, first director of the Mossad, who was sent to Baghdad and Kurdistan as the first emissary to the Jews in the Middle Eastern countries.[1]

Kurdistan was imitating the path of “Yahudistan” (“Land of the Jews, Jewishstan”), claiming that both the Kurds and the Jews are ethnically different from neighbouring Arabs, Persians, and Turks. The Kurds, mainly the Iraqi Kurds, are in fact natural allies of Israel and have been so for six decades. The ties between the two groups are historical, political, and economic.

Kurdish Jews who migrated to Israel in the 1940s and early 1950s became ambassadors for the Kurds of Iraq, pleading their cause among the Israeli public. In the 1960s, the Iraqi Kurds helped smuggle the remaining Jews out of Iraq. Around 300,000 Jews of Kurdish origin reside in Israel. In 1966, Iraqi defence minister Abd al-Aziz al-Uqayli blamed the Kurds of Iraq for establishing “a second Israel” in the Middle East.

In 1963, Israeli Prime Minister Golda Meir allocated the Kurds $100,000. Israel’s chief of staff Rafael Eytan has visited Kurdistan. In 1968 and1973, Mustafa Barzani visited Israel twice to meet Israeli officials, including Levi Eshkol and Meir, the Prime Ministers in those years. Israeli Prime Minister Menachem Begin admitted that Israelis train Kurdish forces in Israel and Kurdistan. During the Kurdish uprising against the Iraqis in 1965–1975, they supplied arms, antitank and antiaircraft weapons and ammunition, and the Israeli Mossad used the mountainous area to launch operations in Iraq, Iran, Syria and Turkey.

In 1975, the relationship came to a halt after Iraq and Iran signed the Algiers Agreement to end the Kurdish rebellion (supported by the Shah of Iran) and Iran agreed to close off Israel’s access to Iraqi Kurdistan. In 1980, Israeli Prime Minister Menachem Begin admitted that the Israelis assisted the Kurds during their uprising against the Iraqis between 1965 and1975. In 2013, KRG Vice President Kasart Rasul visited Israel with a delegation to learn about Israel’s agriculture techniques. In June of 2014, Israel accepted a large Kurdish oil shipment in the Kurdish struggle against ISIS. The purchase was a significant help to the Kurdish government at a time of economic crisis.

In May and August of 2015, Israel imported 14 million barrels of Kurdish oil, encompassing 77% of the Israeli demand. It is important to note that the Kurds were exporting oil to Israel against the Iraqi central government’s wishes. In 2017, Israel was the only country to support a controversial independence referendum publicly, and it announced its support for the  Kurdish independence as opposed by the US in 2018: delegations from Kurdistan visited Israel to meet Israeli leaders and academic

Days after former President Donald Trump’s tweet of US withdrawal, Israeli Prime Minister Benjamin Netanyahu announced that Israel was prepared to give humanitarian assistance to the “gallant Kurdish people.” Yet the Kurds are citizens of three countries openly hostile to Israel, namely Iran, Iraq, and Syria, and one country, Turkey, whose relations with Israel are lukewarm at best. In 2019, Tzipi Hotovely, Israel’s Deputy Foreign Minister said: “We are assisting them (the Kurds) through various channels…”. He is proud of our taking a stand alongside the Kurdish people.”

The Israeli-Kurdish relationship can be beneficial to KRG only if the US can commit to Iraq and Syria’s partition, an improbable and obviously undesirable move. However, the US support to the Kurds is not expected to be indefinite because of the Turkish-Iranian absolute rejection of a Kurdish state, as well as that of the central government in Baghdad. Turkey could take drastic steps and increase its level of partnership with Russia at the expense of NATO and the US, a position that no US administration would want to be responsible for. Iran can shut the Kurdistan borders, and the Iraqi security forces can exert a blockade over the northern province. And financially, neither the US nor Israel are able to meet Erbil’s financial demands and employees’ salaries.

Abdullah Öcalan said once: It is more difficult to change the traditional Kurdish ways than split the atom. The Kurdish dream is made to remain a dream. The Kurds continue to offer themselves as guns for hire and as a shield for foreign troops. When will the Kurds raise their awareness and turn towards their respective host governments to consolidate their relationship and fully integrate into their different countries?

The Kurds’ choices: “No Friends but the Mountains… and Certainly not Israel.”

TOM SEGEV, an Israeli historian, is the author of a number of influential books, including 1949: The First Israelis (Free Press, 1986), The Seventh Million: Israelis and the Holocaust (Hill and Wang, 1993), and One Palestine, Complete: Jews and Arabs under the British Mandate (Metropolitan, 2000). He also writes for Ha’Aretz newspaper.

0 thoughts on “The Kurds’ choices:”No Friends but the Mountains… and Certainly not Israel.””