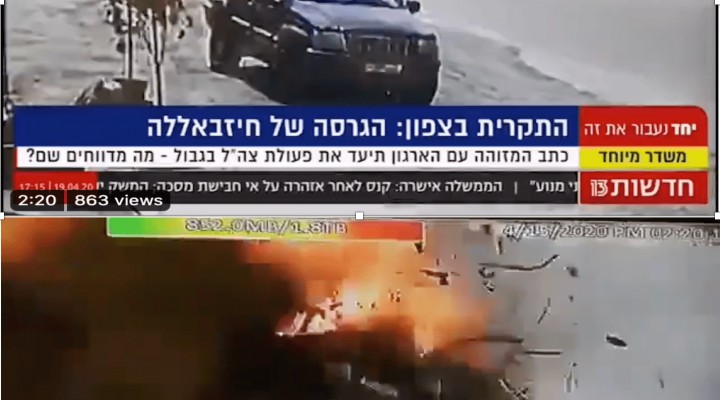 The Israeli leadership has not tired of trying to change the Rules of Engagement (ROE) with Hezbollah since its defeat in the 2006 war, in the hope of eliminating the organisation that rose to state level in military capabilities (and medical skills, as it showed its preparations to confront the emerging COVID-19 virus). Israel has tried to hit targets inside Syria to stop convoys coming into Lebanon loaded with advanced weapons. However, Israel, after pursuing a non-provocation policy with Hezbollah for many years, decided to improvise and attempt a sneak attack on Beirut with drones, in the hope of introducing a new ROE and hitting Hezbollah targets. Hezbollah, however, returned the Israeli attempt by creating another balance of deterrence, embarrassing and ridiculing Israel and its army. But that, it seems, did not deter Israel, which was searching for methods to break the existing Rules of Engagement. The breach came on the northern border. Did the tension bring a large-scale escalation between Israel and Hezbollah any closer?

Since the beginning of the Syrian war in 2011 and the participation of Hezbollah in this war throughout the entire Syrian geography since 2013, Israel has not hit any Hezbollah target causing casualties in its ranks, with two exceptions. The first was in 2015 when hitting two cars roaming in the Quneitra – the occupied Golan area- killing an Iranian Revolutionary Guards officer and the person responsible for protecting VIPs in “Hezbollah”, Jihad Imad Mughniyeh, and their companions. Hezbollah responded by striking an Israeli convoy in the Shebaa Farms area, killing an Israeli captain and sergeant and wounding 7 others. Tel Aviv accepted the tit-for-tat and refrained from responding further.

In the same year, Israel assassinated Samir al-Quntarin in the Syrian capital, Damascus. Al-Quntar was in charge of the organisation and recruitment among the Druse of Suweida and the occupied Golan. After these two incidents, whenever Israel wanted to hit a truck bound for Lebanon, it would bomb the road in front of the truck to force it to stop and give time for passengers to evacuate to a safe distance before striking the cargo. This introduced an acceptable ROE between Israel and Hezbollah, as there were no casualties but only equipment lost which was eventually replaced.

Israeli soldiers repairing a fence at the borders with Lebanon
Indeed, after his return from a visit to Washington, Israeli Defence Minister Naftali Bennett admitted that “Israel hits a Hezbollah truck loaded with weapons and leaves five trucks without intercepting them.” This indicates that Israel is aware it has failed to reduce the capabilities of Hezbollah and to prevent the supply of advanced weapons and precision missiles. Israel wishes to permanently eliminate Hezbollah and is still working hard to do so, but without finding a way to break the “deterrence equation” imposed on it by Secretary-General Hassan Nasrallah, and without triggering a wider conflict which Israel is not ready for.

The last attempt was in August last year when Israel sent suicide drones to the southern suburb of Beirut. One of the drones exploded and another failed and was captured. This unusual Israeli violation required the response of “Hezbollah”, as its Secretary General promised, in an unprecedented step, striking not only in the occupied Shebaa Farms, but along the 125 km Lebanese border.

This humiliated Israel and its strong army, which withdrew and evacuated its military and observation positions at a depth of 5 km along the borders. Not only that, but Israel provided Hezbollah with fake targets to end the “distress” of Tel Aviv and thereby put an end to the embarrassment that afflicted the political and military leadership of the Israeli entity.

A blue bag containing an old vacuum cleaner with visible cables to confuse the Israeli soldiers, thrown on the other side of the borders.
This created a balance which effectively deterred Israel: it would not dare to attack Hezbollah after such a harsh and humiliating experience. Hence, Hezbollah wanted to prevent the installation of a new equation, which Israel was seeking, namely to start operations piloted by drones against multiple targets. This new cycle was broken before becoming established.

Recently in Jdeidet Yabous inside Syrian territory, a Cherokee vehicle belonging to Hezbollah members whose unit operates in Quneitra stopped in front of Al-Haidari station. It is not excluded that Israel had hit the road in front of the car to warn passengers to leave. Another method Israel has used often has been to hack the mobile phones of the personnel inside the car and send a message in Arabic asking them to leave before the car was destroyed. The car was stopped in front of the station, and the passengers, who did not panic, got out because of their familiarity with the Israeli method used for years, which aims not to cause human losses so as to prevent a symmetrical response.

After the operator of the drone confirmed that all passengers had evacuated the vehicle and removed their personal belongings and individual weapons, it launched a missile that hit close to it, to destroy it. The missile did not hit the vehicle directly due to the strong winds that were blowing at this time in the border area between Syria and Lebanon.

Hezbollah, which has not yet officially declared responsibility for the operation, refrained from commenting. However, the following day, Israel found three breaches of its border fence cut in three different locations that fall under the responsibility of three different Israeli battalions on the border with Lebanon. Also, three closed blue bags with electrical wires inside were left on the other side of the fences for the Israeli to find them.

The goal of the operation was not to make Israeli snipers shoot the bags (they turned out to contain an old vacuum cleaner, an empty box, and a bag of water). Nor was the objective to see robots and drones dealing with the suspicious bags.  Rather it was to tell Israel that the tunnels that it uncovered last year crossing the borders would be useless. Hezbollah showed that crossing of the border above ground is simple and easy in many locations under the nose of the electronic surveillance devices and sensitive cameras installed by Israel very close to the place of the breach.

The second message is clear: any act of provocation against Hezbollah will be met with a response inside what Hezbollah calls “occupied Palestine” and not only in the Lebanese occupied Shebaa Farms.

The third message is that any attempt to turn the threat into an opportunity to change the ROE will be answered with a direct response commensurate with the size of the Israeli strike. Furthermore, any future Israeli aggression will be followed by a possible attack on the nearby settlements, or adoption of other measures ready, planned and prepared within the bank of objectives Hezbollah has.

Hezbollah has demonstrated the existence of a loose flank that it has removed from its sleeve, indicating that it has many options available as an appropriate response to Israeli aggression. The price of the Cherokee car struck by Israel is about 4000 dollars, while the price of the missile fired and the measures it took to search for a possible breach is much higher.

Does Israel really believe that it is a superpower that can deal with the Corona virus and its spread even while striking Syria, Lebanon and Iraq (during its internal crisis), while lacking preparedness on the internal domestic front, at the same time confronting the growing strength of Hezbollah’s experience and advanced capabilities? If so, Israel is mistaken.

0 thoughts on “Israel and Hezbollah: Confirmation of Deterrence Policy”