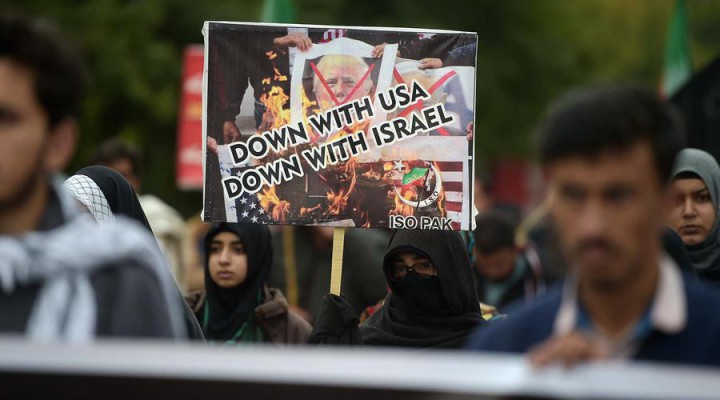 It does not matter where the green light came from for the US targeted assassination of Quds Force commander Major General Qasem Soleimani and the Hashd al-Shaabi second in command Abu Madhi al-Muhandis.

This is an act of war. Unilateral, unprovoked and illegal.

President Trump may have issued the order. Or the US Deep State may have ordered him to issue the order.

According to my best Southwest Asia intel sources, “Israel gave the US the coordinates for the assassination of Qasem Soleimani as they wanted to avoid the repercussions of taking the assassination upon themselves.”

It does not matter that Trump and the Deep State are at war.

One of the very few geopolitical obsessions that unite them is non-stop confrontation with Iran – qualified by the Pentagon as one of the five top threats against the US, almost at the level of Russia and China.

And there cannot be a more startling provocation against Iran – in a long list of sanctions and provocations – than what happened in Baghdad. Iraq is now the preferred battleground of a proxy war against Iran that may now metastasize into a hot war, with devastating consequences.

We knew it was coming. There were plenty of rumbles in Israeli media by former Defense and Mossad officials. There were explicit threats by the Pentagon. I discussed it in detail in Umbria last week with sterling analyst Alastair Crooke – who was extremely worried. I received worried messages from Iran. The inevitable escalation by Washington was being discussed until late Thursday night here in Palermo, actually a few hours before the strike. Sicily, by the way, in the terminology of US generals, is AMGOT: American Government Occupied Territory.

Once again, the Exceptionalist hands at work show how predictable they are. Trump is cornered by impeachment. Netanyahu has been indicted. Nothing like an external “threat” to rally the internal troops. Supreme Leader Ayatollah Khamenei knows about these complex variables as much as he knows of this responsibility as the power who issued Iran’s own red lines. Not surprisingly he already announced, on the record, there will be blowback: “A forceful revenge awaits the criminals who have his blood and the blood of other martyrs last night on their hands.” Expect it to be very painful.

Blowback by a thousand cuts

I met Muhandis in Baghdad two years ago – as well as many Hashd al-Shaabi members. Here is my full report. The Deep State is absolutely terrified Hashd al-Shaabi, a grassroots organization, are on the way to becoming a new Hezbollah, and as powerful as Hezbollah. Grand Ayatollah Sistani, the supreme religious authority in Iraq, universally respected, fully supports them.

So the American strike also targets Sistani – not to mention the fact that Hashd al-Shaabi operates under guidelines issued by the Iraqi Prime Minister Abdel Mahdi. That’s a major strategic blunder that can only be pulled off by amateurs.

Major General Soleimani, of course, humiliated the whole of the Deep State over and over again – and could eat all of them for breakfast, lunch and dinner as a military strategist. It was Soleimani who defeated ISIS/Daesh in Iraq – not the Americans bombing Raqqa to rubble. Soleimani is a superhero of almost mythical status for legions of young Hezbollah supporters, Houthis in Yemen, all strands of resistance fighters in both Iraq and Syria, Islamic Jihad in Palestine, and all across Global South latitudes in Africa, Asia and Latin America.

There’s absolutely no way the US will be able to maintain troops in Iraq, unless the nation is re-occupied en masse via a bloodbath. And forget about “security”: no imperial official or imperial military force is now safe anywhere, from the Levant to Mesopotamia and the Persian Gulf.

In the short term, Tehran will be extremely careful in its response. A hint of – harrowing – things to come: it will be blowback by a thousand cuts. As in hitting the Exceptionalist framework – and mindset – where it really hurts. This is how the Roaring, Raging Twenties begin: not with a bang, but with the release of whimpering dogs of war.