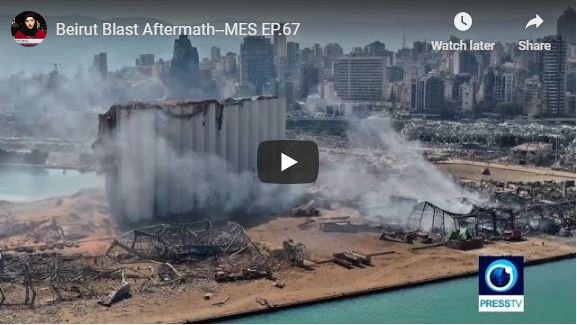 The majority of Lebanese people put the blame squarely on the political elite and the corruption and mismanagement for the Beirut Explosion on August 4rth. However, only the US backed politicians in Lebanon began parroting from the first hour of the blast that Hezbollah is to blame for this disaster and sent in their protestors that same week to start riots in the capital while hundreds were still missing and thousands remain in hospitals getting treated as hundreds were laid for their final rest. To discuss this issue with us from Beirut is Mr. Maan Bachour Former secretary general of the Arab National Congress.

International response to Beirut’s disastrous explosion in Beirut shows that there is a will to surmount the devastating impact of the crisis facing the Lebanese people. However, US sanctions against Lebanon might even prevent this aid from reaching the government institutions. How will the international community be able to stand with Lebanon while the US continues its foreign policy of bullying nations? To discuss this issue with us from Washington is Dr. Ziad ALHafez, political economist.