HOME / WORLD / The Beirut Explosion: Who is responsible? 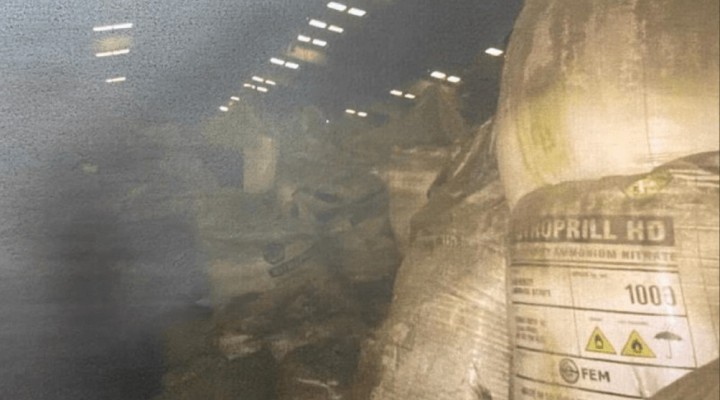 On Tuesday 4thof August, an explosion at the Lebanese harbour in the heart of the capital Beirut caused devastating human casualties and material destruction. Over 140 people died instantly, 80 are still missing under the rubble, and over 5000 were wounded. More than 300,000 homes were destroyed and many more were damaged. 2,750 tons of Ammonium Nitrate (AN) (an equivalent of 1,000 tons of TNT) somehow ignited and registered the largest explosion since the end of World War II. Many theories, accusing Israel or Hezbollah or the CIA, are circulating like wildfire in the Lebanese capital. Where is the truth? Cui bono?

The Rhosus, a ship flying the Moldavian flag was sailing from Georgia to Mozambique carrying (among other merchandise) 2,750 tons of Ammonium Nitrate destined for the Fabrica de Explosives in Mozambique. This shipment was paid for by the Banco Internacional De Mozambique. It stopped in Beirut on 20/11/2013 to offload agricultural machines and was expected to load goods from Lebanon for Jordan on its way to Mozambique. An inspection concluded the ship was unfit to sail, and local Lebanese authorities effectively prevented the Rhosus from sailing. Lebanese port authorities discharged the cargo into Port Warehouse no.12 and later confiscated the cargo due to bills unpaid by the shipowner.

Ammonium Nitrate has many properties, notably as a component of explosive mixtures (Mellor, 1922; Elvers 1989, Suslick 1992). Pure AN is very stable and should meet specified quality requirements to be used in the production of industrial explosives. According to the European Fertilizer Manufacturers Association, AN is especially difficult to detonate and does indeed need a substantial stimulus for this to happen. But it must be stored in a dry, well-ventilated and sealed storage area. Moreover, any electrical installation in the storage area must be resistant to ammonia vapour.

For over six years, the 2,750 tons of AN remained in the Lebanese warehouse without any plans to relocate or re-sell it. Moreover, the storage area chosen is subject to the changing weather of the Lebanese climatic seasons, which include suffocating heat in the summer. The storage area was of metal construction with no proper ventilation.

Last year, Captain Naddaf who works at the harbour under the National Security Service, called his superior to inform him about the presence of a “dangerous cargo at warehouse no. 12.” His superior officer, General A. instructed the young officer to provide a written report and take pictures of the warehouse and the contents. The warehouse construction had a breach big enough for the passage of a man, which would facilitate entry or even theft.

How is the Lebanese harbour organised? It is controlled by a kind of local mafia composed of high ranking officers, customs directors, administrators and security officials. Each person in charge has been appointed by a political leader offering his men immunity and protection. The harbour produces immense amounts of money and bribes are the daily bread of all those who run this “show”. In the face of such corruption, it is now clear that scientific expertise about what is happening to store AN and the conditions in which 2,750 tons of it are stored counted for little. Actually, many officers in this Port have no competence for the jobs they do and are appointed, as we have seen, by favouritism and through political connections. This is indeed the case for the Director of Customs and the Army intelligence, General S., responsible for harbour movements and contents. So, given all that, when a problem or a disaster occurs, as it did on Tuesday, it will obviously be very difficult to find those really responsible. So how did the conditions for this AN explosion arise?

On the 4th of August, at 15:00 local time, a blacksmith was asked to close the holes in the warehouse to prevent potential smuggling of the content. The blacksmith was not informed about the hazardous content of the warehouse, nor he was told to take the necessary precautions to prevent the spread of metal particles that produce fragments and can trigger a fire. He was working at a distance no more than a few centimetres from the AN bags that were lying on the floor, from which a clear substance was leaking. Once the job was done, between 16:30 and 17:00, smoke was seen coming from the warehouse.

Firemen were called to deal with the potential fire. At 18:08 the first explosion was heard, followed by the second one over a minute later. After the first explosion, a fire ignited inside the warehouse. The fire generated more heat, enough for the entire stock of AN to blow up and create a vacuum (negative pressure). The pressure of the explosion caused the many casualties and devastating destruction in the city.

Who called the blacksmith and allocated the budget for his work? Was he informed of the hazard of welding next to Ammonium Nitrate? Why were the 2,750 tons of AN left for more than six years in non-regulation storage for no justifiable reason whatsoever?

The question has to be asked: “who benefits from the explosion?” The affected area belongs mainly to people who are not generally friendly to Hezbollah. Therefore, it would not have been in Israel’s interest nor in that of the US to bomb and cause so much damage to the properties and businesses of friendly parties. Destroying this part of Beirut in order to impose a “new Middle East” or a “new Lebanon” makes no sense either, because the anti-Hezbollah population is currently weaker than ever and is not in a position to confront Hezbollah. France and the US are in no better position to influence the population.

Speculation about Hezbollah storing weapons at warehouse 12 is ridiculous and unfounded- because the place was under constant surveillance by cameras controlled by the security forces themselves. Hezbollah would certainly not store weapons in an area both unfriendly and not under its own control.

Hezbollah, in fact, is currently waiting for the Special Tribunal for the assassination of the ex-Prime Minister Rafic Hariri to announce its verdict. This is how the US, to please Israel, is trying to curb Hezbollah’s influence in Lebanon- but to no avail. Indeed, the US and Israel have tried everything in their power in Syria, in Iraq and in Lebanon but failed in their attempts. The US is imposing harsh sanctions on Syria and Lebanon (preventing Gulf and European countries from assisting with the severe Lebanese financial crisis) but the outcome is the same: Hezbollah won’t submit.

The many “conspiracy theories” fail to line up with the facts of this accident. Ignorance, incompetence, favouritism and bureaucracy are the reasons for the loss of so many lives and the destruction of Beirut, a capital where people have not learned to stand together. This is a huge national tragedy. The Lebanese hold property in many foreign countries, west and east. This expresses the lack of a sense of belonging- because this is a country where elected politicians have amassed and stolen all the country’s wealth, where they hoard power, and where they pass it on to their sons.

One thought on “The Beirut Explosion: Who is responsible?”