HOME / WORLD / Beirut Devastated: The New Paradigm May Be Explosive 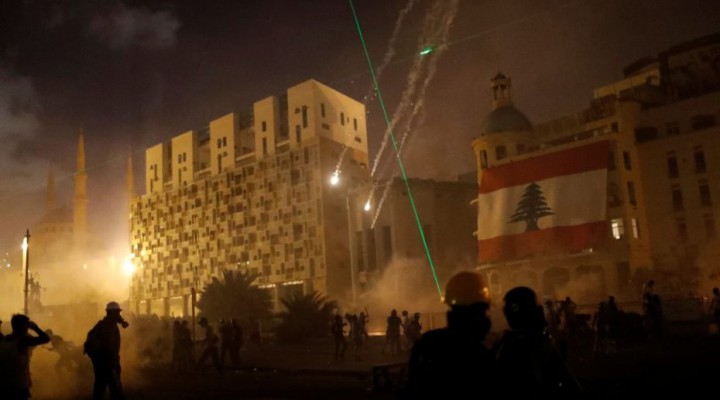 Sometimes the news cycle and the geo-political cycle simply part company. This is one such occasion – the devastation of Beirut Port. What happened there is destined to constitute a major geo-political event – whatever way its sequellae should cascade out and shape the future. There are good, historic reasons for this parting of the ways: One (which explains the regional silence), is that we have not yet had the forensics. Yes, satellite photos galore, but not the nitty-gritty from the ground. Not the forensics.

The main stream media is in a hurry to ‘shape’ its story of the explosion in advance of the Special Tribunal verdict on the death of Rafic Hariri (now due on 18 August), and which is expected to indict Hizbullah members. Yet there are still many unanswered questions. It will be a further few days until these forensics become available from the site. They will of course be contested, and may resolve very little.

Against this silence, awaiting word from key players, the western and Israeli media headlines are churning out ‘everything you need to know’, and their ‘wrap-ups’ from Beirut. It is however, far from wrapped-up. More questions arise as the days pass. And the region has a collective memory of such geo-political inflection points.

The ‘popular’ 1953 uprising against PM Mossadegh, which transpired to be an MI6/CIA coup, and which – subsequently – was to usher in the game-changing Iranian Revolution; the 2005 assassination of Rafic Hariri, which led to Syria’s exit from Lebanon – and on flimsy computer patterning of calls (of unknown content) on ‘families’ of cell phones – was institutionalised into shaping the culpability of Hizbullah, and concomitantly, the movement’s widespread terrorist designation. (Hizbullah has, from the outset, disputed the western/international narrative on the Hariri assassination).

Yet the truth is, that what happened to Rafic Hariri remains still obscured in the fog of partisan war (as maybe will be the fate of this week’s Beirut devastation). In Syria, the Chemical Weapons story for Douma became another ‘turning point’, amidst the roar of U.S. Tomahawk missiles (as Assad became a Chemical Weapons pariah). Yet, documents from the OPCW in last days show the chemical weapons claim was a fabrication.

Yes, the region has good cause to pause. On the one hand, we have not had the forensics on the Port explosion, and on the other, we have Trump’s assertion – later reiterated by him – that he was told by his military generals that what happened in Beirut was “an attack” (a bomb). The President did not “speculate” that it was an attack. He said plainly that his generals had told him so.

This statement cannot entirely be air-brushed out of the calculus. And nor can the exact mirroring of the strangely unified ‘shape’ and mushroom effect of the Beirut main explosion with a similar ‘unexplained explosion’ some months ago in Syria – be discounted. And finally, there is the question: Were there three explosions?

So, we await what is likely to be a perfectly binary outcome. Either the devastation resulted from culpable negligence by the port security authorities, or was a bold attempt to audaciously ‘explode’ the current regional dynamics; to re-shape narratives and radically to re-cast geopolitics. Both are possible.

What then? The Israeli narrative is that the destruction in Beirut will cause the Lebanese population to rise up against Hizballah, and will demand that its munitions be removed away from population centres. (Israel of course would welcome the visibility into Hizbullah’s arsenals that this would entail). The scheduling of an emergency UNSC meeting for Monday, and calls to place Lebanon under international supervision, suggest that western states will be seeking to use the crisis further to weaken and constrain Hizbullah.

March 14th will seek to capitalise on what has happened to mobilise the Lebanese against Hizballah, but it is unlikely to get the domestic resonance that others may anticipate. The port of Beirut historically has been a Sunni patrimony. It has no single security structure, and these latter are no friend to Hizbullah. The port is also open to inspection by UNIFIL. If the management of the facility were to be characterised, it would be said to be one of decay and rampant venality. It is possible that this – culpable negligence leading to accident – was responsible fully or partially, for what happened.

If so, it would seem that public anger may focus more on the corrupt Za’im (the ‘capos’ of the system that have been ravaging the economic structure for their own enrichment for decades), than necessarily be directed at Hizbullah. Indeed, the present government may have a tough time to survive – even though it was not in office at the time any negligence may have occurred. That responsibility belongs to the Old Guard.

Were it to transpire that Trump was broadly correct, and that what occurred was an attack of some sort, it would not be hard to answer to the question cui bono? Israeli journalists are already preening themselves over the ‘event’s auspicious timing: That “Lebanon [now] is bound to implode”, and that the explosion’s ‘shockwaves’ will discomfort Hizbullah for a long time to come, but more especially in advance of the Special Tribunal report.

One Israeli journalist added that the explosion “at Lebanon’s main port sends a warning message to Iran, too, who only about a month ago said it would deploy ships and oil tankers to Lebanon. There were even talks of a vessel that would host a power station, which would give Beirut electricity … Israel and the United States in particular, fear these ships, if they do make it to Lebanon, would start a regular supply line not only of oil, flour and medicine, but also of weapons, ammunitions and missile parts”.

Much then, hangs on the forensics: Was this a bold ‘false flag’ initiative to upturn the strategic status quo (of the kind on which Israel once prided itself), hiding beneath, and making use of a publicly known vulnerability at the Beirut port – the storage of 2,700 kg of ammonium nitrate – in order to destroy Hizbullah’s strategic place in the region, and to shift politics in an unexpected new direction (favourable to Israel)?

Or, a further example of Lebanese élite lassitude and venality, caring only for themselves and nothing for the well-being of its people?

If the former, and events presage a renewed attempt to crush Hizbullah, the new regional paradigm indeed may be explosive.

0 thoughts on “Beirut Devastated: The New Paradigm May Be Explosive”