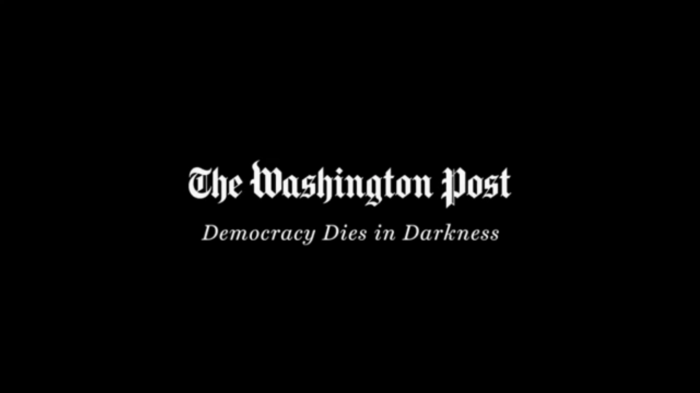 The Washington Post, which is wholly owned by a CIA contractor who is reportedly working to control the underlying infrastructure of the global economy, has published a shockingly deceitful smear piece about Democratic presidential candidate Tulsi Gabbard in the wake of her criticisms of her opponent Kamala Harris’ prosecutorial record during the last Democratic debate.

The article’s author, Josh Rogin, has been a cheerleader for US regime change interventionism in Syria since the very beginning of the conflict in that nation. It is unsurprising, then, that he reacted with orgasmic exuberance when Harris retaliated against Gabbard’s devastating attack by smearing the Hawaii congresswoman as an “Assad apologist”, since Gabbard has been arguably the most consistent and high-profile critic of Rogin’s pet war agenda. His article, titled “Tulsi Gabbard’s Syria record shows why she can’t be president”, is one of the most dishonest articles that I have ever read in a mainstream publication, and the fact that it made it through The Washington Post’s editors is enough to fully discredit that outlet.

You can read Rogin’s smear piece without giving Jeff Bezos more money by clicking here for an archive. There’s so much dishonesty packed into this one that all I can do is go through it lie-by-lie until I either finish or get tired, so let’s begin:

“Gabbard asserts that the United States (not Assad) is responsible for the death and destruction in Syria, that the Russian airstrikes on civilians are to be praised”

This is just a complete, brazen, whole-cloth lie from Rogin. If you click the hyperlink he alleges supports his claim that Gabbard asserts “Russian airstrikes on civilians are to be praised,” you come to a 2015 tweet by the congresswoman which reads, “Bad enough US has not been bombing al-Qaeda/al-Nusra in Syria. But it’s mind-boggling that we protest Russia’s bombing of these terrorists.”

Now, you can agree or disagree with Gabbard’s position that the US should be participating in airstrikes against al-Qaeda affiliates in Syria, but there’s no way you can possibly interpret her acceptance of Russia doing so to be anywhere remotely like “praise” for “airstrikes on civilians”. There is simply no way to represent the content of her tweet that way without knowingly lying about what you think it says. The only way Rogin’s claim could be anything resembling truthful would be if “al-Qaeda” and “civilians” meant the same thing. Obviously this is not the case, so Rogin can only be knowingly lying.

“That bias, combined with her long record of defending the Assad regime and parroting its propaganda, form the basis for the assertion Gabbard has ‘embraced and been an apologist for’ Assad, as Sen. Kamala D. Harris (D-Calif.) said Wednesday post-debate on CNN.”

Gabbard has no record whatsoever of “defending the Assad regime”. This is a lie. There exist copious amounts of quotes by Gabbard opposing US regime change interventionism in Syria and voicing skepticism of the narratives used to promote said interventionism, but there are no quotes anywhere in which she claims Assad is a nice person or that he hasn’t done bad things. If such quotes existed, Rogin would have included them in his smear piece. He did not. All he can do is lie about their existence.

“To repeat: There is no quote in which Tulsi praises, supports, or otherwise ‘apologies for’ Assad,” journalist Michael Tracey recently tweeted with a link to his January article on the subject. “I checked the record a long time ago, and it doesn’t exist. This is just a smear intended to delegitimize diplomatic engagement”

“Claiming that politicians are ‘defending’ objectionable rulers they meet with, in pursuit of achieving some alternative to war, is a tired trope that has been frequently used throughout history to discredit diplomatic engagement,” Tracey wrote. “As Gabbard told me in an interview shortly after returning from Syria: ‘The reason why I decided to take this meeting on this trip was because if we profess to care about the Syrian people — if we really truly care about ending their suffering and ending this war — then we should be ready to meet with anyone if there is a chance that that meeting and that conversation could help to bring about an end to this war.’”

“Other Democratic candidates have promised to end U.S. military adventurism without making excuses for a mass murderer. It’s neither progressive nor liberal to defend Assad, a fascist, totalitarian psychopath who can never peacefully preside over Syria after what he has done.”

Again, claiming that Gabbard has done anything at all to “defend Assad” is a lie. If anything Gabbard has been too uncritical of establishment war propaganda narratives, calling Assad “a brutal dictator” who has “used chemical weapons and other weapons against his people.” Gabbard’s sole arguments on the matter have been in opposition to US military interventionism and skepticism of narratives used to support such interventionism, which only an idiot would object to in a post-Iraq invasion world.

Rogin argues that it’s possible to end US military adventurism without defending and making excuses for Assad, yet this is exactly the thing that Tulsi Gabbard has been doing since day one. Which means Rogin doesn’t actually believe it’s ever okay for any presidential candidate to want to end US military adventurism under any circumstances. Which is of course the real driving motivation behind his deceitful smear piece against Gabbard.

“Gabbard never talks about her other trip — to the Turkish-Syrian border with a group of lawmakers in June 2015, when she met with authentic opposition leaders, victims of Assad’s barrel bombs and members of the volunteer rescue brigade known as the White Helmets. Their stories, which don’t support Assad’s narrative, never make it into Gabbard’s speeches on the campaign trail.”

This one is bizarre. Rogin says this as though Gabbard’s meeting with Assad is something that she brings up “on the campaign trail” rather than something war propagandists like himself bring up and force her to respond to. The fact that those propagandists never bring up Gabbard’s meetings with the Syrian opposition is an indictment of their bias, not hers. The mental gymnastics required to make Gabbard’s meetings with all sides of the Syrian conflict feel more pro-Assad rather than less deserve an Olympic gold medal.

Obviously Gabbard having met with all sides is indicative of an absence of favoritism, not the presence of it. The fact that she didn’t come away from her meetings with empire-allied opposition forces with the opinion that the US should help storm Damascus doesn’t mean she supports any particular side.

“Gabbard’s candidacy should be taken very seriously — not because she has a significant chance of being president, but because her narrative on Syria is deeply incorrect, immoral and un-American. If it were adopted by her party and the country, it would lead the United States down a perilous moral and strategic path.”

Saying a “narrative” can be “un-American” is a fairly straightforward admission that you are authoring propaganda. Unless you believe your nation has one authorized set of narratives, a narrative can’t be “un-American”. This is as close as you’ll ever get to an admission from Rogin that US power structures work to control the dominant narratives about world events, and that he helps them do it. To such a person, opposition to your narrative control agendas would be seen as the antithesis of the group you identify with.

The US empire has an extensive and well-documented history of using lies, propaganda and false flags to initiate military conflicts which advantage it. To continue to deny this after Iraq is either willful ignorance or propaganda.

The fact that Rogin adds “strategic path” to his argument nullifies his claim that his position has anything to do with morality. If your foreign policy concern is with strategic leverage, you will naturally try to interpret anything which advances that strategic path as the moral choice.

“Listening to Gabbard, one might think the United States initiated the Syrian conflict by arming terrorists for a regime-change war that has resulted in untold suffering.”

This is exactly what happened. The US armed extremist militants with the goal of effecting regime change, and before Russia intervened they almost succeeded. According to the former Prime Minister of Qatar, the US and its allies were involved in this behavior from the very beginning of the conflict in 2011. Here is a link to an article full of primary source documents showing that the US and its allies had been scheming since well before 2011 to provoke a civil war in Syria with the goal of regime change. They did exactly what they planned to do, which is exactly the thing Rogin claims they did not do.

But Gabbard never even takes her analysis this far. She simply says the US should not get involved in another US regime change war, because it shouldn’t.

“Responding to Harris, Gabbard called Assad’s atrocities ‘detractions,’[sic] before eventually saying she doesn’t dispute that he’s guilty of torture and murder. That’s a slight improvement from her previous protestations that there was not enough evidence.”

Rogin falsely implies here that Gabbard only just began accusing Assad of war crimes, and that she only did so in response to new pressure resulting from Harris’ criticism. As noted earlier, this is false; Gabbard has been harshly critical of Assad.

“Gabbard then quickly accused President Trump of aiding al-Qaeda in Idlib. ‘That does sound like a talking point of the Assad regime,’ CNN’s Anderson Cooper said. He could have just said she is wrong.”

Even the US State Department has acknowledged that Idlib is an al-Qaeda stronghold, and the Trump administration has taken aggressive moves to prevent the Assad coalition from launching a full-scale campaign to reclaim the territory. Claiming that this did not happen is a lie per even the accepted narratives of the US political/media class.

“Gabbard’s 2017 trip was financed and run by members of a Lebanesesocialist-nationalist party that works closely with the Assad regime.”

Former US Congressman Dennis Kucinich, who accompanied Gabbard on this trip, dismissed this accusation as “so much horseshit I can’t believe it.” All parties involved have denied this narrative, which Rogin has played a pivotal role in promoting from the very beginning and to which he has been forced to make multiple embarrassing corrections.

“Gabbard’s plan to overtly side with Assad and Russia while they commit crimes against humanity would be a strategic disaster, a gift to the extremists and a betrayal of decades of U.S. commitments to stand up to mass atrocities. Democratic voters who believe in liberalism and truth must reject not only her candidacy but also her attempt to disguise moral bankruptcy as a progressive value.”

Another lie; Gabbard has no such plan. Opposing US regime change interventionism isn’t “siding” with anybody, it’s just not supporting a thing that is literally always disastrous and literally never helpful.

Rogin’s closing admonishment to reject not just Gabbard but her skepticism of US war narratives is yet another admission that he’s concerned with narrative control here, not with truth and not even really with a US presidential candidate.