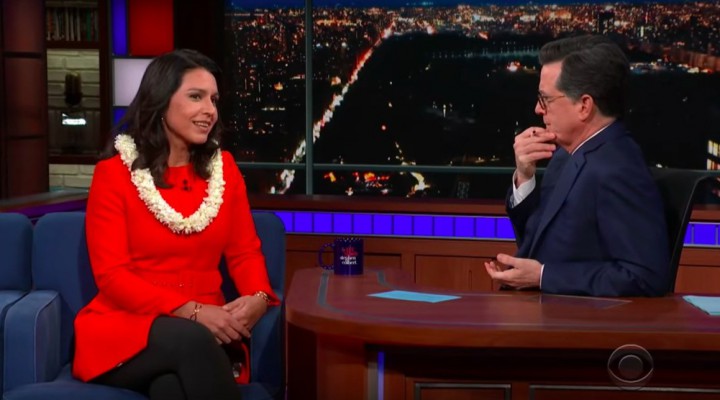 Hawaii Congresswoman and Democratic presidential candidate Tulsi Gabbard recently appeared on The Late Show with Stephen Colbert, where instead of the light, jokey banter about politics and who she is as a person that Democratic presidential candidates normally encounter on late night comedy programs, the show’s host solemnly ran down a list of textbook beltway smears against Gabbard and made her defend them in front of his audience.

Normally when a Democratic Party-aligned politician appears on such a show, you can expect jokes about how stupid Trump is and how badly they’re going to beat the Republicans, how they’re going to help ordinary Americans, and maybe some friendly back-and-forth about where they grew up or something. Colbert had no time to waste on such things, however, because this was not an interview with a normal Democratic Party-aligned politician: this was a politician who has been loudly and consistently criticizing US foreign policy.

After briefly asking his guest who she is and why she’s running for president, Colbert jumped right into it by immediately bringing up Syria and Assad, the primary line of attack employed against Gabbard by establishment propagandists in American mainstream media.

Colbert: Do you think the Iraq war was worth it?

Colbert: Do you think that our involvement in Syria has been worth it?

Colbert: Do you think that ISIS could have been defeated without our involvement and without our support of the local troops there?

Colbert: So, but if it is someone like Bashar al-Assad, who gasses his own people, or who engages in war crimes against his own people, should the United States not be involved?

Gabbard: The United States should not be intervening to overthrow these dictators and these regimes that we don’t like, like Assad, like Saddam Hussein, like Gaddafi, and like Kim Jong Un. There are bad people in the world, but history has shown us that every time the United States goes in and topples these dictators we don’t like, trying to end up like the world’s police, we end up increasing the suffering of the people in these countries. We end up increasing the loss of life, but American lives and the lives of people in these countries. We end up undermining our own security, what to speak of the trillions of dollars of taxpayer money that’s spent on these wars that we need to be using right here at home.

Like I said, this is not a normal presidential candidate. How often do you see a guest appear on a network late night talk show and talk about the CIA arming terrorists in Syria and the fact that US military interventionism is completely disastrous? It just doesn’t happen. You can understand, then, why empire propagandist Stephen Colbert spent the rest of the interview informing his TV audience that Tulsi Gabbard is dangerous and poisonous.

This was unwatchable. Colbert just went down the list of scripted Gabbard smears (Assad, David Duke) then sermonized about how US military intervention is a force for good in this world. All without telling a single joke. Late night “comedy” shows are propaganda for livestock. https://twitter.com/cmputrwiz/status/1105327755334283264 …

Colbert twice interjected the State Dept.’s line about the alleged Assad chemical attack on his own people; Tulsi then corrected him saying several of the groups, including al Qaeda & ISIS, had been trained by the US and had been reported as being a part of those alleged chemical https://twitter.com/DraftTulsi/status/1105323025489121280 …

729 people are talking about this

Colbert: You got some heat for meeting with Bashar al-Assad. Do you not consider him a war criminal? Why did you meet with that man?

Gabbard: Yes. Reports have shown that that’s a fact.

Colbert: So you believe the intelligence agencies on that. Because I heard that you did not necessarily believe those reports.

The reason I call Colbert a propagandist and not simply a liberal empire loyalist who happens to have been elevated by billionaire media is because these are carefully constructed narratives that he is reciting, and they weren’t constructed by him.

Trying to make it look to the audience as though Gabbard is in some way loyal to Assad has been a high-priority agenda of the mainstream media ever since she announced her presidential candidacy. We saw it in her recent appearance on The View, where John McCain’s sociopathic daughter called her an “Assad apologist” and demanded that Gabbard call Assad an enemy of the United States. We saw it in her recent CNN town hall, where a consultant who worked on Obama’s 2008 campaign was presented as an ordinary audience member to help CNN’s Dana Bash paint Gabbard’s skepticism of intelligence reports about an alleged chemical weapons attack by the Syrian government as something that is weird and suspicious, instead of the only sane position in a post-Iraq invasion world. We saw it in her appearance on MSNBC’s Morning Joe last month, where the entire panel piled on her in outrage that she wouldn’t call Assad an enemy of the United States. It’s such a common propaganda talking point that the New York Times‘ Bari Weiss famously made a laughingstock of herself by repeating it as self-evident truth on The Joe Rogan Experience without having the faintest clue what specific facts it was meant to refer to, just because she’d heard establishment pundits saying it so much.

This is an organized smear by the mass media attempting to marry Gabbard in the eyes of the public to a Middle Eastern leader whom the propagandists have already sold as a child-murdering monster, and Colbert is participating in it here just as much as the serious news media talking heads are. It’s been frustrating to watch Gabbard fold to this smear campaign by acting like it’s an established fact that Assad “gases his own people” and not the hotly contested empire-serving narrative she knows it is. Gabbard is being targeted by this smear because she challenges US political orthodoxy on military violence (the glue which holds the empire together), so no amount of capitulation will keep them from trying to prevent the public from trusting her words. 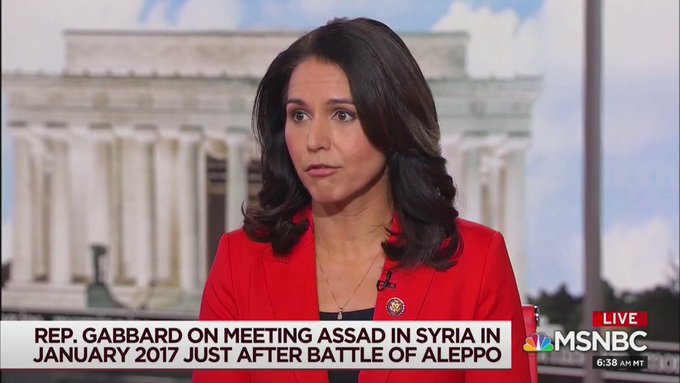 The journalist interrogating Tulsi seems to believe that US forces in Syria are fighting Assad. Tulsi corrects her, says those troops were deployed there to fight ISIS. These people don’t even know what’s happening in the places they want the US to occupy

“I don’t know whether America should be the policemen of the world,” Colbert said after Gabbard defended her position.

“It is my opinion that we should not be,” Gabbard replied, causing Colbert to launch into a stuffy, embarrassing sermon on the virtues of interventionism and US hegemony that would make Bill Kristol blush.

“If we are not, though, nature abhors a vacuum, and if we are not involved in international conflicts, or trying to quell international conflicts, certainly the Russians and the Chinese will fill that vacuum. And we will step away from the world stage in a significant way that might destabilize the world, because the United States, however flawed, is a force for good in the world in my opinion. Would you agree with that?”

Again, this is a comedy show.

Gabbard explained that in order to be a force for good in the world the United States has to actually do good, which means not raining fire upon every nation it dislikes all the time. Colbert responded by reading off his blue index card to repeat yet another tired anti-Gabbard smear.

“You’ve gotten some fans in the Trump supporter world: David Duke, Steve Bannon, and, uh, Matt, uh, Gaetz, is that his name? Matt Gaetz? What do you make of how much they like you?”

This one is particularly vile, partly because Gabbard has repeatedly and unequivocally denounced David Duke, who has a long-established and well-known history of injecting himself into the drama of high-profile conversations in order to maintain the illusion of relevance, and partly because it’s a completely irrelevant point that is brought up solely for the purpose of marrying Tulsi Gabbard’s name to a former Ku Klux Klan leader. Colbert only brought this up (and made Newsweek totally squee) because he wanted to assist in that marrying. The fact that there are distasteful ideologies which also happen to oppose US interventionism for their own reasons does not change the undeniable fact that US military interventionism is consistently disastrous and never helpful and robs the US public of resources that are rightfully theirs.

This interview was easily Colbert’s most blatant establishment rim job I’ve ever seen, surpassing even the time he corrected his own audience when they cheered at James Comey’s firing to explain to them that Comey is a good guy now and they’re meant to like him. Colbert’s show is blatant propaganda for human livestock, and the fact that this is what American “comedy” shows look like now is nauseating.

When Tulsi Gabbard first announced her candidacy I predicted that she’d have the narrative control engineers scrambling all over themselves to kill her message, and it’s been even more spectacular than I imagined. I don’t agree with everything she says and does, but by damn this woman is shaking up the establishment narrative matrix more than anybody else right now. She’s certainly keeping it interesting.