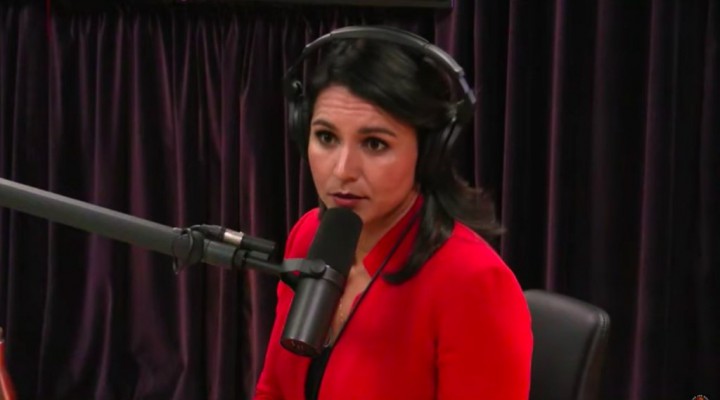 In midst of an interesting and wide-ranging discussion on the Joe Rogan Experience, Democratic congresswoman and presidential candidate Tulsi Gabbard said that if elected president she would drop all charges against NSA whistleblower Edward Snowden and WikiLeaks founder Julian Assange.

“As far as dropping the charges?” Gabbard asked.

“If you’re president of the world right now, what do you do?”

Rogan noted that Sweden’s preliminary investigation of rape allegations has just been re-opened, saying the US government can’t stop that, and Gabbard said as president she’d drop the US charges leveled against Assange by the Trump administration.

“Yeah,” Gabbard said when asked to clarify if she was also saying that she’d give Edward Snowden a presidential pardon, adding, “And I think we’ve got to address why he did things the way that he did them. And you hear the same thing from Chelsea Manning, how there is not an actual channel for whistleblowers like them to bring forward information that exposes egregious abuses of our constitutional rights and liberties. Period. There was not a channel for that to happen in a real way, and that’s why they ended up taking the path that they did, and suffering the consequences.”

This came at the end of a lengthy discussion about WikiLeaks and the dangerous legal precedent that the Trump administration is setting for press freedoms by prosecuting Assange, as well as the revelations about NSA surveillance and what can be done to roll back those unchecked surveillance powers.

“What happened with [Assange’s] arrest and all the stuff that just went down I think poses a great threat to our freedom of the press and to our freedom of speech,” Gabbard said. “We look at what happened under the previous administration, under Obama. You know, they were trying to find ways to go after Assange and WikiLeaks, but ultimately they chose not to seek to extradite him or charge him, because they recognized what a slippery slope that begins when you have a government in a position to levy criminal charges and consequences against someone who’s publishing information or saying things that the government doesn’t want you to say, and sharing information the government doesn’t want you to share. And so the fact that the Trump administration has chosen to ignore that fact, to ignore how important it is that we uphold our freedoms, freedom of the press and freedom of speech, and go after him, it has a very chilling effect on both journalists and publishers. And you can look to those in traditional media and also those in new media, and also every one of us as Americans. It was a kind of a warning call, saying Look what happened to this guy. It could happen to you. It could happen to any one of us.”

Gabbard discussed Mike Pompeo’s arbitrary designation of WikiLeaks as a hostile non-state intelligence service, the fact that James Clapper lied to Congress about NSA surveillance as Director of National Intelligence yet suffered no consequences and remains a respected TV pundit, and the opaque and unaccountable nature of FISA warrants.

Some other noteworthy parts of Gabbard’s JRE appearance for people who don’t have time to watch the whole thing, with hyperlinks to the times in the video:

I honestly think the entire American political system would be better off if the phoney debate stage format were completely abandoned and presidential candidates just talked one-on-one with Joe Rogan for two and a half hours instead. Cut through all the vapid posturing and the fake questions about nonsense nobody cares about and get them to go deep with a normal human being who smokes pot and curses and does sports commentary for cage fighting. Rogan asked Gabbard a bunch of questions that real people are interested in, in a format where she was encouraged to relax out of her standard politician’s posture and discuss significant ideas sincerely and spontaneously. It was a good discussion with an interesting political figure and I’m glad it’s already racked up hundreds of thousands of views.

People Who Publicly Fret About Assange Rape Allegations Are Lying