HOME / Multimedia / The Narrative That This War Was “Unprovoked” Prevents Peace

The Narrative That This War Was “Unprovoked” Prevents Peace 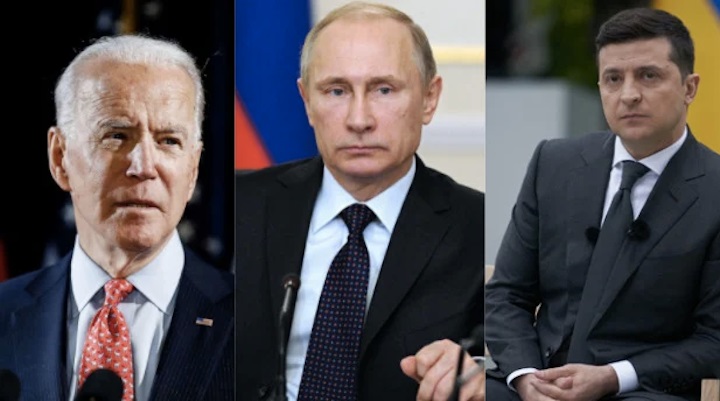 Vladimir Putin has approved the annexation of four territories in eastern Ukraine, whose addition to the Russian Federation now await authorization from Russia’s other branches of government.

The Zelensky government responded to the move by applying to join NATO, only to be immediately shut down by US and NATO officials. Can’t have sacrificial pawns trying to rise above their station on the grand chessboard, after all.

But the empire’s proxy war against Russia continues, and the Ukrainian government has announced its intentions to drive out Russia from all of the Ukrainian territories it has claimed as its own.

“For our plans, [Russia’s annexation] doesn’t matter,” Zelensky advisor Mykhailo Podolyak told Politico, adding that Ukraine will “protect our land using all our forces” and “should liberate all its territories.”

The plan to reclaim territories annexed by Russia will according to Zelensky also include Crimea, which was annexed in 2014.

All this talk about preparing a massive western-backed counter-offensive to recapture annexed territories from Russia — whose ranks are being reinforced with an additional 300,000 reservists — comes as Putin suggests that nuclear weapons may be used to protect what Moscow considers parts of Russia. Russia, like the United States, is one of the nuclear-armed nations without a No First Use policy.

So we appear to be on a collision course toward a massive escalation between two nuclear-armed powers. The more things escalate the more likely it is that a nuclear weapon may be used, either deliberately or as a result of miscommunication or malfunction as nearly happened many times during the last cold war. Once one nuke is used the odds go up astronomically that a great many more will immediately follow, with variables on this outcome including the location where it detonates and how cool all the relevant heads happen to be at that particular historic moment.

But whenever you advocate for this supremely important agenda in any kind of public forum, you get a bunch of brainwashed empire automatons bleating about “appeasement” and accusing you of supporting a monstrous madman. And they do this because that’s what they were trained to do.

the world is now closer to nuclear war than it has ever been, even the Cuban missile crisis, and the entire Western media and political class is just doubling down on getting closer and closer to nuclear apocalypse. It's seriously the most deranged shit I've ever seen in my life

As Noam Chomsky has been pointing out repeatedly, the political/media class have been continually indoctrinating the public with the completely false narrative that Russia’s invasion of Ukraine was “unprovoked”. Every time the war comes up the imperial spinmeisters utter that slogan, in much the same way Michael Jackson had a quota for how often MTV hosts were obligated to refer to him as “The King of Pop Michael Jackson” when his name was mentioned.

But what does it mean if the war is “unprovoked”? It means Putin didn’t invade Ukraine because of anything the western empire was doing, so it couldn’t have been prevented by the western empire behaving less aggressively on Russia’s borders. It means Putin necessarily invaded because he is some kind of evil lunatic who loves to commit war crimes, or a megalomaniacal tyrant who wants to conquer the world because he hates freedom and democracy. Which means he will keep attacking and invading other countries unless he can be stopped. Which means the only answer to the Putin problem is more war.

This is why empire apologists get angry at those who advocate the only sane and rational position toward nuclear brinkmanship by calling for de-escalation and detente. It’s because they’ve been aggressively indoctrinated into the belief that war is the only answer.

The moronic narrative that the invasion of Ukraine was “unprovoked” poses a massive obstacle to peace, because if Putin is just attacking and invading countries solely because he’s crazy and evil it means detente is impossible and he won’t stop until he’s decisively crushed. If it’s accepted that the US empire has played no role in provoking Putin’s actions, that means there’s nothing the empire could do to make continued Russian aggression less likely apart from regime change, or at least severely crippling and punishing Russia militarily.

As long as the fact that this war was provoked remains unacknowledged by the side that provoked it, the sane path of de-escalation and detente will look like reckless appeasement of an irrational madman, and aggressive escalations of nuclear brinkmanship will look like sanity. The absurd position that Putin is an irrational actor with some kind of weird sexual fetish for war crimes is a one-way ticket to endlessly escalating war and eventual nuclear annihilation, because it leaves you with no options but continually intensifying military confrontation.

The claim that peace is impossible and Putin must be crushed imperils the whole world. Even to deliver total victory in Ukraine (pushing Russia back to pre-2014 borders) could easily end up costing millions of lives and trillions of dollars and exponentially increase the risk of nuclear war, with no guarantee of success at all. But even if you did push Putin all the way out of Ukraine, what then? He’ll still be a crazy madman who wants to invade countries because he’s evil and hates freedom. The internal logic of your narrative says the attacks on Russia must continue until you get regime change. There’s no stopping point on your line of thinking until there’s a direct hot confrontation between nuclear superpowers.

Be an adult and engage your critical thinking. Does a madman who goes around invading countries solely because he’s evil and hates freedom sound like a real-life human being to you? Or does it sound made up? Like something you’d see in a Hollywood movie? Like something that was concocted by people responsible for controlling the dominant narratives of our society and funneled into your mind using media?

Marvel supervillains have more depth and complexity than the one-dimensional characters the imperial spin machine concocts to represent its official enemies. Thanos was a more believable character with more understandable and nuanced motivations than the propaganda machine’s fictional representation of Putin. That representation has been overlaid on top of the actual government official who you might not necessarily agree with, but can definitely understand and engage in diplomacy and negotiation.

People who believe the empire’s narratives about its official enemies have fewer critical thinking skills than your average Marvel movie viewer. Think. Be a grown up and think. Someone’s benefitting from the aggressively promulgated narrative that peace is impossible and war is the only solution. And that someone isn’t you.

How To Defeat Putin

Unpacking the Ukraine ‘Game Change’; Is a Major Conflict Inevitable?