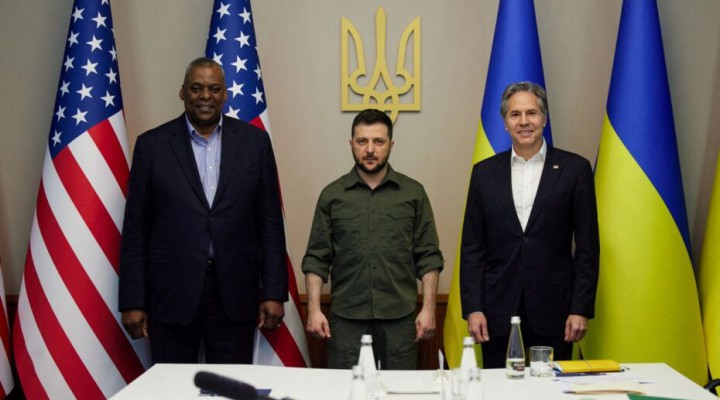 On a recent interview with the Useful Idiots podcast, Noam Chomsky repeated his argument that the only reason we hear the word “unprovoked” every time anyone mentions Russia’s invasion of Ukraine in the mainstream news media is because it absolutely was provoked, and they know it.

“Why? Because they know perfectly well it was provoked,” Chomsky said. “That doesn’t justify it, but it was massively provoked. Top US diplomats have been talking about this for 30 years, even the head of the CIA.”

Chomsky is of course correct here. The imperial media and their brainwashed automatons have spent half a year mindlessly bleating the word “unprovoked” in relation to this war, but one question none of them ever have a straight answer for is this: if the invasion of Ukraine was unprovoked, how come so many western experts spent years warning that the actions of western governments would provoke an invasion of Ukraine?

Because, as Chomsky notes, that is indeed the case. A few days after the invasion began this past February a guy named Arnaud Bertrand put together an extremely viral Twitter thread that just goes on and on and on about the various diplomats, analysts and academics in the west who have over the years been warning that a dangerous confrontation with Russia was coming because of NATO advancements toward its borders, interventionism in Ukraine, and various other aggressions. It contains examples like John Mearsheimer explicitly warning in 2015 that “the west is leading Ukraine down the primrose path, and the end result is that Ukraine is going to get wrecked,” and Pat Buchanan warning all the way back in 1999 that “By moving NATO onto Russia’s front porch, we have scheduled a twenty-first-century confrontation.”

Empire apologists love claiming that the invasion of Ukraine had nothing to do with NATO expansionism (their claims generally based on brazen misrepresentations of what Vladimir Putin has said about Russia’s reasons for the war), but that’s silly. The US war machine was continuing to taunt the possibility of NATO membership for Ukraine right up until the invasion, a threat it refused to take off the table since placing it there in 2008 despite knowing full well that this threat was an incendiary provocation to Moscow.

Most fascinating thing about the Ukraine war is the sheer number of top strategic thinkers who warned for years that it was coming if we continued down the same path.

No-one listened to them and here we are.

Small compilation 🧵 of these warnings, from Kissinger to Mearsheimer.

This is to say nothing of the US empire actively fomenting a violent uprising in 2014 which ousted Kyiv’s sitting government and fractured the nation between its more Moscow-loyal populations to the east and the more US/EU-friendly parts of the country. This led to the annexation of Crimea (overwhelmingly supported by the people who live there) and eight years of brutal warfare against Russia-backed separatists in the Donbas. Ukrainian attacks on those separatists are known to have increased exponentially in the days leading up to the invasion, and it has been argued that this is what provoked Putin’s final decision to commit to invading (which was a last-minute decision according to US intelligence).

The US power alliance could very easily have prevented this war with a few low-cost concessions like enshrining Ukrainian neutrality, rolling back its war machinery from Russia’s borders and sincerely pursuing detente with Moscow instead of shredding treaties and ramping up cold war escalations. Hell, it could likely have prevented this war just by protecting President Zelensky from the anti-Moscow far right nationalists who were openly threatening to lynch him if he began honoring the Minsk agreements and pursuing peace with Russia, as he was originally elected to do.

Instead it knowingly chose the opposite course: continuing to float the possibility of formal NATO membership for Ukraine while pouring weapons into the nation and making it more and more of a de facto NATO member with closer and closer intimacy with the US war machine, and then either ordering, encouraging or tolerating Ukraine’s aggressive assault on Donbas separatists.

Why did the empire opt for provocation over peace? Congressman Adam Schiff gave a pretty good answer to that question in January of 2020 as the road to war was being paved: “so that we can fight Russia over there, and we don’t have to fight Russia here.” If you relinquish the infantile idea that the US empire is helping its good friend Ukraine because it loves the Ukrainian people and wants them to have freedom and democracy, it’s not hard to see that the US sparked a convenient proxy war because it was in its geostrategic interests to do so, and because it wouldn’t be their lives and property getting laid to waste.

2019 RAND Paper Warned US of Failure During Ukraine Conflict

Brian Berletic put out a good video a few days ago about a Pentagon-funded 2019 Rand Corporation paper titled “Extending Russia – Competing from Advantageous Ground,” which is exactly what it sounds like. The US Army-commissioned paper details how the empire can use proxy warfare, economic warfare and other cold war tactics to push its longtime geopolitical foe to the brink without costing American lives or sparking a nuclear conflict. It mentions Ukraine hundreds of times, and it explicitly discusses the same economic warfare tactics we’re seeing today like sanctions and attacking Russia’s energy interests in Europe (the latter of which Berletic points out is also being used to bolster US dominance over its vassals in the EU).

The paper even explicitly advocates continuing to threaten NATO membership with Ukraine to draw out an aggressive response from Moscow, saying, “While NATO’s requirement for unanimity makes it unlikely that Ukraine could gain membership in the foreseeable future, Washington’s pushing this possibility could boost Ukrainian resolve while leading Russia to redouble its efforts to forestall such a development.”

President Biden has made calls for regime change in Moscow that can’t even really be called thinly disguised, and Defense Secretary Lloyd Austin has openly said that the plan is to use this war to “weaken” Russia, which other US officials have told the press is indeed the policy. Comments from the Biden administration continually make it clear that the US alliance is buckling down to keep this war going for years to come, which would fit in nicely with Washington’s known track record of deliberately drawing Russia into military quagmires against US proxies in both Afghanistan and Syria.

So make no mistake, behind all the phony hand-wringing and flag-waving, the US-centralized empire is getting exactly what it wants from this conflict. It gets to overextend Russia militarily and financially, promote its narratives around the world, rehabilitate the image of US interventionism, expand internet censorship, expand militarily, bolster control over its European client states, and all it costs is a little pretend empire money that gets funneled into the military-industrial complex anyway.

Which is why when it looked like peace was at risk of breaking out in the early days of the conflict, the empire sent in Boris Johnson to tell Zelensky that even if he is ready for the war to end, his partners to the west were not.

Russia and Ukraine agreed to a negotiated settlement to end the war in April, but British Prime Minister Boris Johnson intervened to stop the peace deal.

The US and EU instead escalated the proxy war, as the Biden admin admitted, to try to "weaken" Moscowhttps://t.co/xsCvovq8Km

So as you can see, the notion that this war is “unprovoked” is a fart-brained fairy tale for idiots and children; there’s no excuse for a grown adult with internet access and functioning brain matter to ever say such a thing. If China had backed a coup in Mexico and now had a loyal vassal in Mexico City who was letting Beijing distribute weapons along the US border while continually shelling English-speaking separatists in Baja California who are seeking US annexation, there’s no question that Washington would consider this a provocation and would respond accordingly. You can tell me that’s not true, but we’d both know you’re lying.

But as Chomsky said, the press are still spouting this “unprovoked” nonsense anyway.

“Russia is widely believed to have been taken aback by the West’s assertive and unified response to its unprovoked invasion of Ukraine,” reads a CNBC article published just minutes prior to this writing.

“The diplomatic visit underlines the importance of the Russian relationship for China, even in the face of international blow back against Moscow after its unprovoked invasion of Ukraine earlier this year,” reads a new report from CNN hot off the presses.

“It was an unprovoked attack on a sovereign country,” a source is quoted as saying in another CNN article published a few hours ago.

In the mass media you’re not allowed to talk about the known US/NATO/Ukraine actions which experts have been warning for many years would lead us to where we’re at. You’re only allowed to say Putin attacked Ukraine completely unprovoked, in a vacuum, solely because he is evil and hates freedom. And you have to do it while saying the word “unprovoked” at every opportunity.

NATO chief admits that NATO allies have been training and arming Ukraine since 2014.

Something to remember whenever Western media refers to an "unprovoked" invasion. pic.twitter.com/SGHF46yayz

Empire apologists get upset when you talk about the fact that this war was provoked because a large amount of empire apologia in 2022 is built around pretending that provocation just isn’t a thing. By some trick of Orwellian doublethink, this concept we’ve all lived our entire lives knowing about and understanding is now suddenly a freakish and ridiculous invention of the Kremlin.

We’re all guilty of doing the things we knowingly choose to do. If I choose to provoke someone into doing something bad, then they’re guilty of choosing to do the bad thing, but I am also guilty of provoking them. I’m not saying anything new here; this is the plot behind any movie or show with a sneaky or manipulative villain, and it’s been a part of our storytelling since ancient times. Nobody has ever walked out of Shakespeare’s Othello thinking that maybe Iago was just an innocent bystander who was trying to help out his friends.

Most of us learn that provocation is real as children with siblings, kicking the other under the table or whatever to provoke a loud outburst, and we’ve understood it ever since. But in 2022 everyone’s pretending that this extremely basic, kindergarten-level concept is some kind of bizarre, alien gibberish. It’s intensely stupid, and it needs to stop.

Empire apologists will also argue that saying Russia was provoked into invading by the US empire is like saying a rape victim provoked her rapist by wearing a tight skirt, or a battered wife provoked her abuser by disobeying him. And as a survivor of multiple rapes and an abusive relationship I must say I find it extremely offensive when people compare blaming the most powerful empire that has ever existed for its well-documented aggressions to blaming victims of rape and domestic violence. The poor widdle globe-spanning empire is not comparable to a rape victim, and if you find yourself thinking that it is it’s time to re-think your entire worldview.

It’s not okay to be a grown adult in September of 2022 and still say the invasion of Ukraine was unprovoked. You’ve got a brain between your ears and an entire internet of information at your fingertips. Use them.

The Media’s 10 Rules of Hate