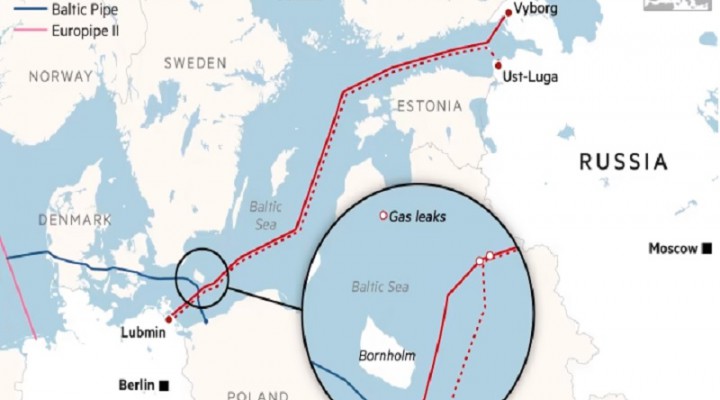 This terrorist attack destroyed any chance of an energy-driven Russian-German rapprochement, immediately catapulted Poland into the position of being one of the continent’s most pivotal energy hubs, and thus took the Anglo-American Axis’ plans for dividing and ruling Europe to the next level.

The unprecedented damage done to the Nord Stream pipelines Monday night was certainly an act of sabotage exactly as Denmark, Germany, Poland, and Russia suspect, though nobody can agree on who carried out this ecological terrorist attack in the Baltic Sea. Kiev, however, predictably blamed Russia for destroying its own pipeline in a remix of its earlier conspiracy theory alleging that Russia regularly bombs the Zaporozhye Nuclear Power Plant that’s also under its control. That ridiculous scenario can therefore reasonably be ruled out, especially since Moscow could just keep the tap turned off for technical reasons without risking getting caught sabotaging its own pipelines in NATO-controlled waters.

Continental European countries like Poland also shouldn’t be suspected either even though that aspiring regional leader’s newly inaugurated Baltic Pipe from Norway makes it a major energy player nowadays. There’s just too much risk of serious ecological blowback to that country’s direct interests to justify carrying out such an act of terrorism just to forever cripple its only potential pipeline competitor, the two Nord Streams. That said, the attack nevertheless does indeed serve Poland’s larger interests for exactly that reason even if it most likely wasn’t behind what happened or had any advance knowledge about it, which is why suspicion should fall on its allies in the Anglo-American Axis (AAA).

Both have an interest in dividing and ruling the EU by facilitating Poland’s rise as a continental Great Power capable of eventually competing with the bloc’s de facto German leader (at least in Central & Eastern Europe [CEE]), which was explained in my mid-September analysis about how “Poland’s Hyping Up The German Threat To Central Europe To Consolidate Its Regional Influence”. In order to knock Germany out of the geopolitical and geo-economic game for good, the AAA must not only successfully trick it into committing economic suicide through its compliance with the anti-Russian sanctions, but also destroy any chance of a strategically meaningful rapprochement with Russia in the future.

Sabotaging the Nord Stream pipelines accomplishes precisely that by completely disincentivizing Germany from potentially clinging to whatever energy-driven plans it might have for eventually repairing relations with Russia. With that scenario confidently discounted after Monday night’s ecological terrorist attack in the Baltic Sea, which also served the purpose of making Poland among the continent’s most pivotal energy hubs, Germany might also figure that it doesn’t have anything more to lose vis a vis Russia by possibly being the first country to send cutting-edge battle tanks to Kiev. This artificially manufactured strategic inertia would thus doom Russian-German relations for decades.

Considering these outcomes, both immediate and emerging, there’s no doubt that the AAA benefits the most from the ecological terrorist attack that was just carried out in the Baltic Sea against the two Nord Stream pipelines. They’re insulated from the consequences of the ecological disaster that they created and are thus able to advance their grand strategic goals without any cost to themselves. This terrorist attack destroyed any chance of an energy-driven Russian-German rapprochement, immediately catapulted Poland into the position of being one of the continent’s most pivotal energy hubs, and thus took their plans for dividing and ruling Europe to the next level.

Gleichschaltung: ‘We don’t care what you think: Everything will be regulated or capped to death’

From Suicide to Dead and Buried… Germany Now Provokes China

Existential Disquiets: Financial War Against the West Begins to Bite