HOME / WORLD / The Boy Who Cried Hitler: Notes From The Edge Of The Narrative Matrix 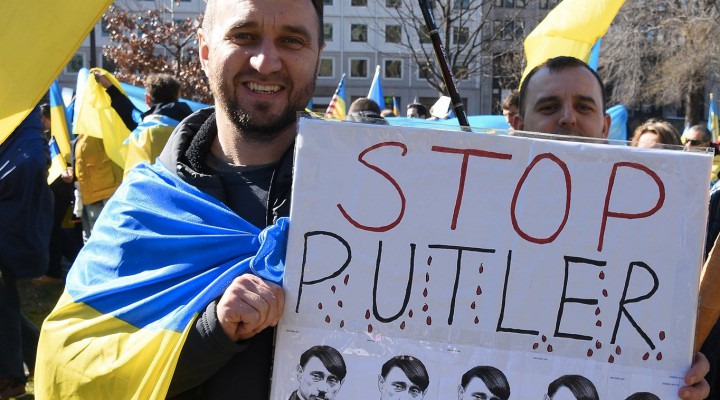 Criticizing your government is propaganda.

Disagreeing with neocons is supporting fascism.

Opposing an empire is defending tyranny.

Criticism of US foreign policy looks like Russian propaganda to people who’ve spent their entire lives marinating in US propaganda.

They need so much propaganda, censorship and organized trolling because without those things the public would realize that pouring billions of dollars into an unwinnable conflict that risks nuclear war and makes everyone poorer actually sucks and doesn’t benefit normal people.

Comparisons of Putin to Hitler only sound profound and relevant if you only just began paying attention to US foreign policy and are therefore unaware that literally every single US enemy is always copiously compared to Hitler. It’s like The Boy Who Cried Wolf, except there is no wolf, and the boy just keeps crying “Wolf!” over and over again, and the villagers never learn their lesson and never stop believing him.

Because mainstream westerners ignored all wars until Ukraine, they don’t know we’ve seen all these tricks before. They don’t know the war propaganda is airing reruns. They think it’s new to compare today’s Official Enemy to Hitler. They never question the atrocity narratives. They don’t know the US always lies about every war. They think it’s a crazy conspiracy theory to suggest that the actions and motives of their government isn’t what they’ve been told. They say “Uh, hello? PUTIN is the one who invaded!” like that obvious fact somehow makes it impossible to be lied to about the other aspects of the war.

Because they weren’t paying attention to all the empire’s tricks leading up to this, they don’t see the same old patterns rolling themselves out yet again, often by the same old voices as before. They don’t know what patterns to watch for, so they don’t see or recognize them. That’s the only reason their eyes don’t reflexively roll when they’re told today’s Official Enemy invaded completely unprovoked, solely because he is evil and hates freedom, or that the US is defending its friends the Ukrainians because it wants to protect freedom and democracy.

If you only just started paying attention and don’t know the US power alliance literally always lies about every war it’s involved in, the war propaganda slides down their throats with zero gag reflex, because they don’t recognize it as propaganda. It’s unfamiliar to them.

Criticizing the extensively documented western aggressions that led to this war is not the same as saying the invasion is good or that Vladimir Putin is a wonderful person. If this isn’t obvious to you, it’s because US propaganda has turned your brain into soup.

It’s absolutely insane how literally any criticism of the indisputable well-documented western provocations in Ukraine gets shouted down and raged at. You’re only allowed to say this war is completely unprovoked and began solely because Vladimir Putin is evil and hates freedom.

If discussing facts and criticizing the foreign aggressions of the most powerful government in the world is taboo, you might be ruled by tyrants and surrounded by their brainwashed human livestock. If you spend your time raging and yelling at those who advocate peace, you might just be pro-war.

I gotta hand it to the war propagandists on Ukraine, it’s truly impressive how they’ve managed to convince everyone that the real “anti-war” position on this issue is the one being promoted by John Bolton, Bill Kristol, Tom Cotton and Mike Pompeo.

I can respect arguments which assign blame to both the US and Russia. I can respect arguments which place more blame on Russia than on the US empire’s provocations. But the mainstream narrative does neither: it completely exonerates the US from even the tiniest bit of responsibility. Which is just a joke; there is no valid basis on which to claim this war was unprovoked. None. The only people who claim this are the propagandists and those they have propagandized.

But that’s pretty much everyone I wind up arguing with about Ukraine: those who adamantly insist that the most powerful empire that has ever existed bears exactly zero percent of the responsibility for this war. That sycophantic, bootlicking mind virus is what I am always pushing back on.

If you believe the US empire bears zero responsibility for starting this war, even in the face of mountains of evidence to the contrary, it’s because empire propaganda has melted your brain. But this is most people. It’s the mainstream perspective on this war.

That demands pushback. Herculean pushback. The fact that the most powerful and belligerent power structure on the face of this earth is predominantly viewed as having no responsibility for the extremely dangerous war it deliberately provoked demands aggressive opposition.

The US deliberately provoked this war. The US is keeping this war going. The US is using this war to advance its geostrategic interests in Europe and Asia. These are facts. When facts are taboo, you are living in a world of lies.

The Assange case is resonating with so many people because it’s personal. It’s asking each of us what kind of world we want to live in: one where journalists are allowed to tell the truth about the powerful, or one where they are not? It’s a question that demands an answer.

It often enrages empire apologists that I speak this way, because they’re not used to criticism of the US empire being voiced like this, but it also sometimes confuses people who agree with me for the same reason. Socialists and anti-imperialists usually mitigate their voices. I don’t, because that’s just a bad habit. If you’re right, you should speak like you’re right. If we don’t, the only ones speaking like they’re right will be those who are wrong. And then those who are wrong are the only ones who will be listened to.

And that’s exactly what’s happening: those with the most influential voices are those who defend the most depraved impulses of the most powerful people in the world. Those are the people who are being listened to right now. So speak like you know you’re right and they’re wrong, because that is indeed the case.

Fredric Jameson says it is easier to imagine the end of the world than the end of capitalism. Adyashanti says spiritual people are often more afraid of life than they are of death. These two points seem related. Armageddon feels less scary than sorting our shit out as a species.

The idea of finally turning towards each other and coming into enough intimacy to move from competition-based systems to collaboration-based ones feels more intimidating than the end of the world, so people start hoping for the end because at least that way it’ll be over with. For the same reason people who can’t imagine going on living get suicidal ideations, people who can’t imagine humanity transcending its self-destructive pattering get omnicidal ideations.

This is a major obstacle. Humans need to overcome their fear of life.

0 thoughts on “The Boy Who Cried Hitler: Notes From The Edge Of The Narrative Matrix”