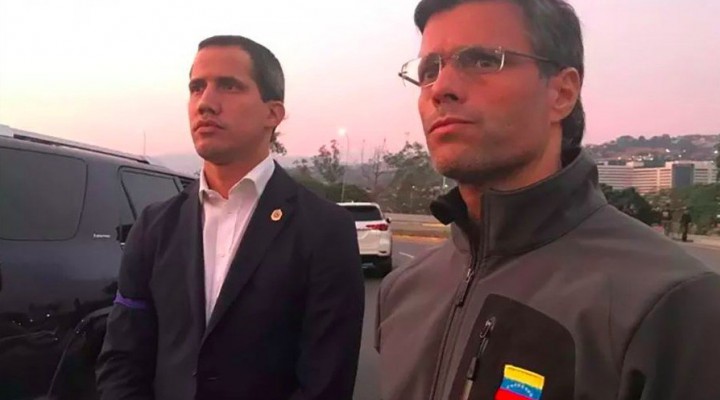 Washington, DC: We too would like for Juan Guaido to be regarded as the interim president of Venezuela, because the current President of Venezuela is too cozy in policy and practice with our geopolitical opponents. We would not mind this so much if Venezuela didn’t sit atop the world’s largest proven oil reserves. If we can’t control what happens to those oil reserves, we won’t be as dominant on the world stage as we otherwise would be.

US allies: We too would like it if Juan Guaido were president instead of Nicolas Maduro, because that’s what the United States wants and it is in our interests to go along with whatever they say. If we go along with Washington’s dictates we are treated favorably, whereas if we don’t we’ll end up getting treated the way the Venezuelan government is being treated currently.

Donald Trump: I’ve been told by the neoconservatives who I have appointed to guide my foreign policy that it would be good for America’s resource control agendas if I apply more sanctions to Venezuela’s economy at this time. This will force the Venezuelan civilians, and more importantly their military, to overthrow Maduro or else see their loved ones die of malnutrition and lack of healthcare.

John Bolton: I too encourage Venezuela’s citizens and military to turn against their government and begin inflicting violence upon it until Nicolas Maduro is either dead or removed from power. If you do this, you won’t have to starve and die because of our steadily increasing sanctions, and we’ll get to control the oil that your country happens to sit on top of. As an added benefit, hurting large numbers of human beings gives me sexual gratification.

CIA [via bullhorn]: Umm, excuse me, Venezuelans? This is the CIA. Will you all please start having a civil war now to overthrow your government? That would make us very happy, thank you.

Mainstream media: The US government, and of course the powerful unelected individuals who run it from behind the scenes without any accountability or oversight from the public, is attempting to topple Venezuela’s only recognized government using starvation sanctions, CIA operations, and an open campaign to delegitimize the sitting president of that nation. They are doing this because controlling as much of the world’s oil supplies as possible helps them to control the world, and controlling the world is the thing that they want to do. These are the things we would be telling you if we weren’t owned by the same plutocratic class which owns the US government.

Wealthier Venezuelans: We would like to see Nicolas Maduro replaced with a government installed by the United States and its allies, because we feel that that would benefit us financially.

Marco Rubio: I am highly beholden to the powerful groups that have elevated me to the position that I am currently in.

Juan Guaido: I am now standing here with Leopoldo Lopez and a handful of military personnel in an attempt to persuade Venezuela’s military to turn against Nicolas Maduro and begin killing anyone who stands in their way. I went to university in the United States of America.

Venezuelans: This is awful and we hate all of this.