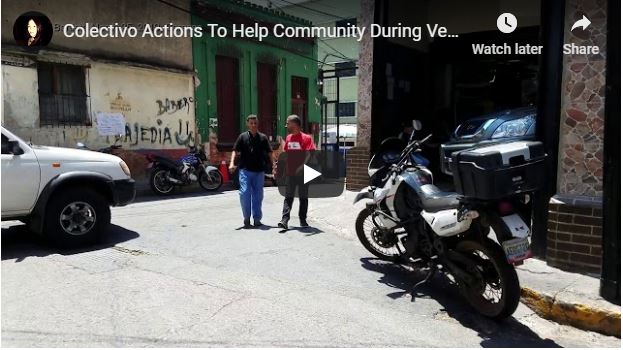 During the power outages in March, I saw example after example of Venezuelans dealing calmly with the outages, helping one another.  The US almost certainly expected chaos, but that didn’t happen.

On March 25, I met with Jaskeherry, head of a colectivo in Caracas, who spoke of how he and his collective had helped others in the community when power outages occured.

On March 31, I spent over an hour with a Venezuelan journalist, Ricardo González [https://twitter.com/RicardoGZK], talking with people who had come to Waraira Repano mountainside to collect clean spring water.
In spite of the media hype that Venezuela is in a state of crisis, you can see people calmly waiting for their opportunity to fill up water jugs, kids wading in the water, people joking, also people frustrated as to be expected under such exhausting circumstances.
You can also hear a variety of opinions here. It’s interesting that those who spoke in a pro-government stance seem to be politically aware of US machinations against Venezuela, which is something I’ve encountered among many of the poorest I’ve been meeting in my last few weeks here, moving around Caracas’ poorest areas.
https://ingaza.wordpress.com/2019/04/04/venezuelans-calmly-helped-one-another-during-manufactured-electricity-crisis/
Tags: Cyber warfareregime changesabotageUSAVenezuela