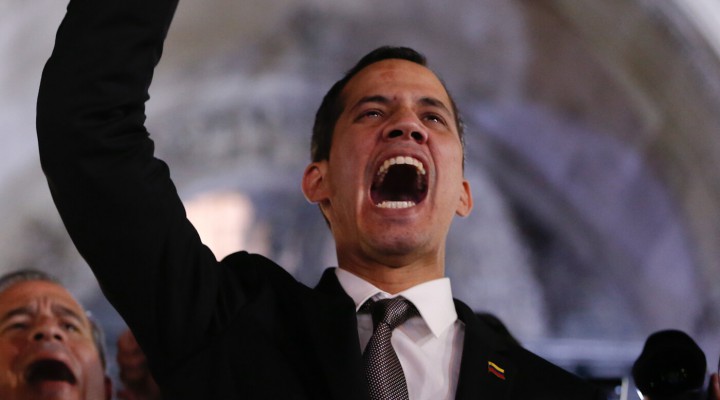 MPN- With its hands tied when it comes to military intervention, only covert actions — such as those described in the RED Team document — are likely to be enacted by the U.S. government, at least at this stage of its ongoing “regime change” effort in Venezuela.

Juan Guaidó, the self-proclaimed “interim president of Venezuela” who is supported by the United States government, recently announced coming “tactical actions” that will be taken by his supporters starting April 6 as part of “Operation Freedom,” an alleged grassroots effort to overthrow Venezuelan President Nicolás Maduro.

That operation, according to Guaidó, will be led by “Freedom and Aid Committees” that in turn create “freedom cells” throughout the country — “cells” that will spring to action when Guaidó gives the signal on April 6 and launch large-scale community protests. Guaidó’s stated plan involves the Venezuelan military then taking his side, but his insistence that “all options are still on the table” (i.e., foreign military intervention) reveals his impatience with the military, which has continued to stay loyal to Maduro throughout Guaidó’s “interim presidency.” 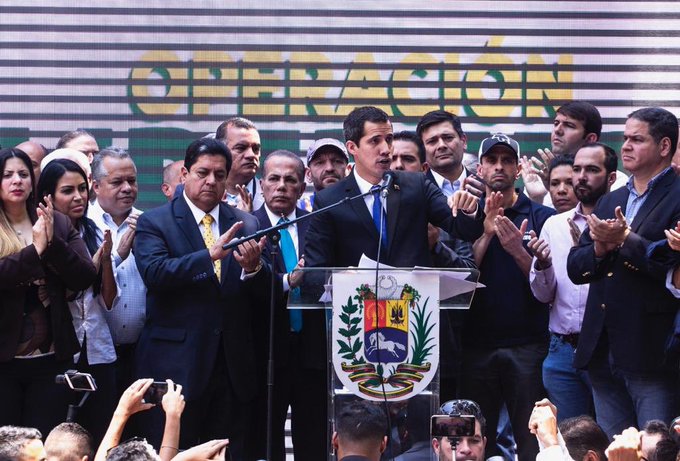 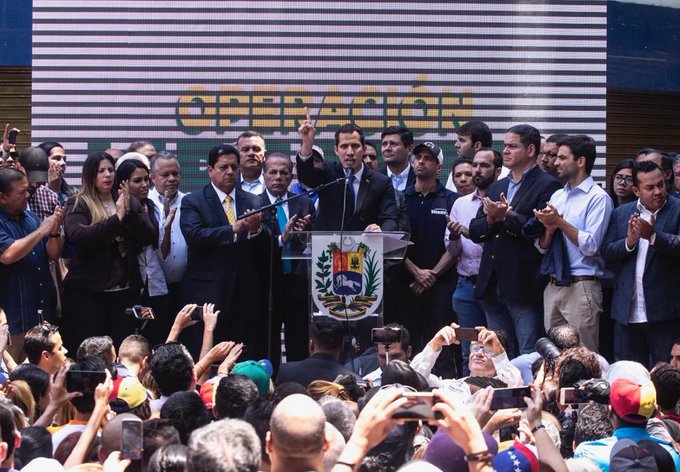 5,224 people are talking about this

However, a document released by the U.S. Agency for International Development (USAID) in February, and highlighted last month in a report by Devex, details the creation of networks of small teams, or cells, that would operate in a way very similar to what Guaidó describes in his plan for “Operation Freedom.”

Given that Guaidó was trained by a group funded by USAID’s sister organization, the National Endowment for Democracy (NED) — and is known to take his marching orders from Washington, including his self-proclamation as “interim president” and his return to Venezuela following the “humanitarian aid” showdown — it is worth considering that this USAID document may well serve as a roadmap to the upcoming and Guaidó-led “tactical actions” that will comprise “Operation Freedom.”

Titled “Rapid Expeditionary Development (RED) Teams: Demand and Feasibility Assessment,” the 75-page document was produced for the U.S. Global Development Lab, a branch of USAID. It was written as part of an effort to the “widespread sentiment” among the many military, intelligence, and development officials the report’s authors interviewed “that the USG [U.S. government] is woefully underperforming in non-permissive and denied environments,” including Venezuela. Notably, some of the military, intelligence and development officials interviewed by the report’s authors had experience working in a covert capacity in Venezuela.

The approach put forth in this report involves the creation of rapid expeditionary development (RED) teams, who would “be deployed as two-person teams and placed with ‘non-traditional’ USAID partners executing a mix of offensive, defensive, and stability operations in extremis conditions.” The report notes later on that these “non-traditional” partners are U.S. Special Forces (SF) and the CIA.

The report goes on to state that “RED Team members would be catalytic actors, performing development activities alongside local communities while coordinating with interagency partners.” It further states that “[i]t is envisioned that the priority competency of proposed RED Team development officers would be social movement theory (SMT)” and that “RED Team members would be ‘super enablers,’ observing situations on the ground and responding immediately by designing, funding, and implementing small-scale activities.”

In other words, these teams of combined intelligence, military and/or “democracy promoting” personnel would work as “super enablers” of “small-scale activities” focused on “social movement theory” and community mobilizations, such as the mobilizations of protests.

The decentralized nature of RED teams and their focus on engineering “social movements” and “mobilizations” is very similar to Guaidó’s plan for “Operation Freedom.” Operation Freedom is set to begin through “Freedom and Aid committees” that cultivate decentralized “freedom cells” throughout the country and that create mass mobilizations when Guaidó gives the go ahead on April 6. The ultimate goal of Operation Freedom is to have those “freedom cell”-generated protests converge on Venezuela’s presidential palace, where Nicolás Maduro resides. Given Guaidó lack of momentum and popularity within Venezuela, it seems highly likely that U.S. government “catalytic actors” may be a key part of his upcoming plan to topple Maduro in little over a week.

Furthermore, an appendix included in the report states that RED Team members, in addition to being trained in social movement theory and community mobilization techniques, would also be trained in “weapons handling and use,” suggesting that their role as “catalytic actors” could also involve Maidan-esque behavior. This is a distinct possibility raised by the report’s claim that RED Team members be trained in the use of both “offensive” and “defensive” weaponry.

In addition, another appendix states that RED Team members would help “identify allies and mobilize small amounts of cash to establish community buy-in/relationship” —  i.e., bribes — and would particularly benefit the CIA by offering a way to “transition covert action into community engagement activities.”

Feeling Bolsonaro’s breath on its neck

Also raising the specter of a Venezuela link is the fact that the document suggests Brazil as a potential location for a RED Team pilot study. Several of those interviewed for the report asserted that “South American countries were ripe for pilots” of the RED Team program, adding that “These [countries were] under-reported, low-profile, idiot-proof locations, where USG civilian access is fairly unrestrained by DS [Diplomatic Security] and where there is a positive American relationship with the host government.”

This January, Brazil inaugurated Jair Bolsonaro as president, a fascist who has made his intention to align the country close to Washington’s interests no secret. During Bolsonaro’s recent visit to Washington, he became the first president of that country to visit CIA headquarters in Langley, Virginia. President Donald Trump said during his meeting with Bolsonaro that “We have a great alliance with Brazil — better than we’ve ever had before” and spoke in favor of Brazil joining NATO.

Though Bolsonaro’s government has claimed late in February that it would not allow the U.S. to launch a military intervention from its territory, Bolsonaro’s son, Eduardo Bolsonaro — an adviser to his father and a Brazilian congressman — said last week that “use of force will be necessary” in Venezuela “at some point” and, echoing the Trump administration, added that “all options are on the table.” If Bolsonaro’s government does allow the “use of force,” but not a full-blown foreign military intervention per se, its closeness to the Trump administration and the CIA suggests that covert actions, such as those carried out by the proposed RED Teams, are a distinct possibility.

The RED Team report was authored by members of Frontier Design Group (FDG) for USAID’s Global Development Lab. FDG is a national security contractor and its mission statement on its website is quite revealing:

Since our founding, Frontier has focused on the challenges and opportunities that concern the “3Ds” of Defense, Development and Diplomacy and critical intersections with the intelligence community. Our work has focused on the wicked and sometimes overlapping problem sets of fragility, violent extremism, terrorism, civil war, and insurgency. Our work on these complex issues has included projects with the U.S. Departments of State and Defense, USAID, the National Counterterrorism Center and the U.S. Institute of Peace.”

FDG also states on is website that it also regularly does work for the Council on Foreign Relations and the Omidyar Group — which is controlled by Pierre Omidyar, a billionaire with deep ties to the U.S. national security establishment that were the subject of a recent MintPressseries. According to journalist Tim Shorrock, who mentions the document in a recent investigation focusing on Pierre Omidyar for Washington Babylon, FDG was the “sole contractor” hired by USAID to create a “new counterinsurgency doctrine for the Trump administration” and the fruit of that effort is the “RED Team” document described above.

One of the co-authors of the document is Alexa Courtney, FDG founder and former USAID liaison officer with the Department of Defense; former manager of civilian counterterrorism operations in Afghanistan for USAID; and former counterinsurgency specialist for U.S. intelligence contractor Booz Allen Hamilton.

In addition, according to Shorrock, Courtney’s name has also been found “on several Caerus [Associates] contracts with USAID and US intelligence that were leaked to me on a thumb drive, including a $77 million USAID project to track ‘licit and illicit networks’ in Honduras.” Courtney, according to her LinkedIn account, was also recently honored by Chevron Corporation for her “demonstrated leadership and impact on development results.” MintPress recently reported on the role of Chevron in the current U.S.-led effort to topple Maduro and replace him with Guaidó.

Send in the USAID

Though Devex was told last month that USAID was “still working on the details in formulating the Rapid Expeditionary Development (RED) Teams initiative,” Courtney stated that the report’s contents had been “received really favorably” by “very senior” and “influential” former and current government officials she had interviewed during the creation of the document.

For instance, one respondent asserted that the RED Team system would “restore the long-lost doing capacity of USAID.” Another USAID official with 15 years of experience, including in “extremely denied environments,” stated that:

We have to be involved in national security or USAID will not be relevant. Anybody who doesn’t think we need to be working in combat elements or working with SF [special forces] groups is just naïve. We are either going to be up front or irrelevant … USAID is going through a lot right now, but this is an area where we can be of utility. It must happen.”

Given that the document represents the efforts of the sole contractor tasked with developing the current administration’s new counterterrorism strategy, there is plenty of reason to believe that its contents — published for over a year — have been or are set to be put to use in Venezuela, potentially as part of the upcoming “Operation Freedom,” set to begin on April 6.

This is supported by the troubling correlation between a document produced by the NED-funded group CANVAS and the recent power outages that have taken place throughout Venezuela, which were described as U.S.-led “sabotage” by the country’s government. A recent report by The Grayzone detailed how a September 2010 memo by CANVAS — which trained Juan Guaidó — described in detail how the potential collapse of the country’s electrical infrastructure, like that recently seen in Venezuela, would be “a watershed event” that “would likely have the impact of galvanizing public unrest in a way that no opposition group could ever hope to generate.”

The document specifically named the Simon Bolivar Hydroelectric Plant at Guri Dam, which failed earlier this month as a result of what the Venezuelan government asserted was “sabotage” conducted by the U.S. government. That claim was bolstered by U.S. Senator Marco Rubio’s apparent foreknowledge of the power outage. Thus, there is a precedent of correlation between these types of documents and actions that occur in relation to the current U.S. regime-change effort in Venezuela.

Furthermore, it would make sense for the Trump administration to attempt to enact such an initiative as that described in the document, given its apparent inability to launch a military intervention in Venezuela, despite its frequent claims that “all options are on the table.” Indeed, U.S. allies — including those close to Venezuela, like Colombia — have rejected military intervention, given the U.S.’ past role in bloody coups and civil wars throughout the region.

Thus, with its hands tied when it comes to military intervention, only covert actions — such as those described in the RED Team document — are likely to be enacted by the U.S. government, at least at this stage of its ongoing “regime change” effort in Venezuela.