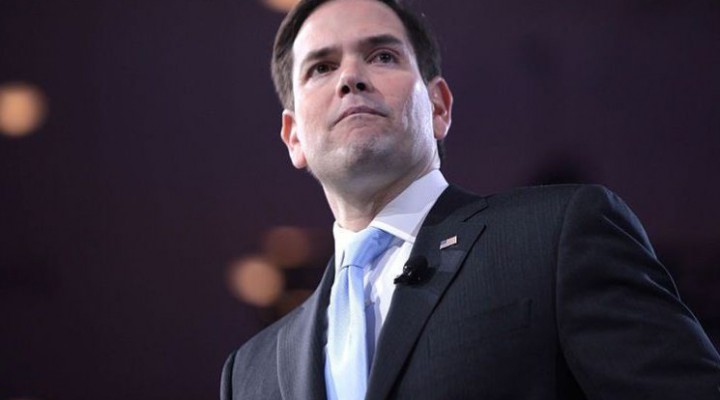 The obscenity of American imperialism is that it has inflicted huge social misery in Venezuela from years of sanctions and illegal confiscation of billions of dollars in assets belonging to the nation.

US imperialists are so desperate in their regime-change predations over Venezuela, they seem to have a problem controlling their drooling mouths.

Republican Senator Marco Rubio – who has become a point man for the Trump administration in its regime-change campaign in Venezuela – was a little too celebratory. Within minutes of the nationwide power outage last Thursday, Rubio was having verbal orgasms about the “long-term economic damage”… “in the blink of an eye”. But it was his disclosure concerning the precise damage in the power grid that has led the Venezuelan government to accuse the US of carrying out a sabotage.

Information Minister Jorge Rodriguez noted how Rubio, in his tweeted comments “three minutes” after the power outage, mentioned failure of “back-up generators” in Venezuela’s main hydroelectric plant, known as the Guri Dam, located in Bolivar State. The dam supplies some 80 per cent of the Venezuelan population of 31 million with its electricity consumption.

Rodriguez mockingly ascribed “mystic skills” to Rubio because the Florida Republican senator appeared to know the precise nature of the power failure even before the Venezuelan authorities had determined it.

The Venezuelan government has since claimed that the failure in the electric grid was caused by a cyber attack on the computer system controlling the Guri Dam turbines. Caracas said it will present proof of its claims to the United Nations.

Apart from Rubio’s apparent insider information, there are several other indicators that Venezuela’s latest turmoil from power blackout was indeed caused by US sabotage, and specifically a cyber attack.

The South American country has experienced recurring power cuts over recent years due to economic problems and Washington’s sanctions. But the latest outage was widespread – at least 70 per cent of the country – and sustained for more than four days, rather than being rectified within hours. That scale of disruption suggests an unprecedented event, way beyond intermittent problems of maintenance.

The duration of the blackout in the capital Caracas and other major cities also indicates that the nature of the problem was difficult to reverse, which would be consistent with a cyber attack on the power grid. “It was a kill-shot,” says American political analyst Randy Martin.

Furthermore, US officials like President Trump’s national security advisor John Bolton as well as “special envoy” on Venezuelan affairs Elliot Abrams have been warning that Washington is seeking new ways to pile pressure on Venezuelan leader Nicolas Maduro to stand down.

Abrams was caught out last week in a prank phone call made by two Russian entertainers posing as Swiss President Ueli Maurer in which Abrams openly advocated crushing the Venezuelan banking system in order to topple the government in Caracas. The American envoy, who was convicted over the Iran-Contra affair in the 1980s for sponsoring terrorism to sabotage Nicaragua, appeared to balk at using overt US military power against Venezuela. That suggests Washington was persuaded on the efficacy of cyber warfare to inflict social chaos and incite popular anger against the Maduro government.

The immediate reaction by Washington officials and the US-backed political opposition in Venezuela was to blame the Maduro government for the power disorder. The failure was flagged up as a sign of “incompetence” and “mismanagement” of the oil-rich country by the socialist administration. Opposition leader Juan Guaido, who has declared himself the rightful president with Washington’s blessing, conveyed the logic of blackmail when he declared, “the lights will come back on when usurper Maduro is gone”.

US Secretary of State Mike Pompeo also weighed in with repulsive gloating within hours of Venezuela’s power crisis. Pompeo tweeted: “No food. No medicine. Now, no power. Next, no Maduro.”

The delight openly displayed by Washington officials in regard to aggression against Venezuela has broken new ground in terms of the brazenness of US imperialism.

Only a few weeks ago, Bolton announced that the objective for seeking regime change in Venezuela against the elected President Nicolas Maduro was for US corporations to seize the South American state’s vast oil wealth – reckoned to be the largest known reserves on the planet, far exceeding those of Saudi Arabia.

Such is Washington’s unbridled lust for Venezuela’s natural resources that its imperialist advocates are falling over themselves with naked lies and crimes.

When a US Trojan Horse aid convoy was blocked from entering into Venezuela from Colombia last month, American politicians and media immediately blamed the Maduro government for sabotaging the effort. An aid truck was set alight on a border crossing on February 23. US Vice President Mike Pence and Senator Rubio, as well as CNN, condemned the Venezuelan authorities for “callous” destruction of vital aid delivery to its long-suffering people. It turns out, as even the New York Times has now admitted three weeks later, that the aid truck was torched by US-backed opposition supporters on the Colombian side of the border.

The obscenity of American imperialism is that it has inflicted huge social misery in Venezuela from years of sanctions and illegal confiscation (theft) of billions of dollars in assets belonging to the nation. Then it has the audacity to mount a charade seeming to deliver humanitarian aid.

The latest twist to this sadistic game played by Washington is turning the lights off across the entire nation, in homes, hospitals, airports and schools, among other essential services, and attempting to lay the blame on the Venezuelan government.

We may, however, be thankful for Washington’s overweening arrogance and criminality. Because, as Marco Rubio’s rash remarks concerning the latest power outage show, the American gangsterism towards Venezuela is being exposed for the naked aggression that it is.

US-based political analyst Randy Martin, in comments for this column, says that what Washington is doing to Venezuela is tantamount to the “rape of democracy”. “American imperialism has no longer any shame,” he said. “It used to rape countries under the cover a seedy alleyway of false excuses and hollow claims of righteousness. Now it has its trousers around its ankles and trying to rape Venezuela right on the global Main Street.”