HOME / SOCIAL/CULTURAL / Racism in Venezuela: “People Who Never had a Voice Now Have One and will Never Give it up Again” 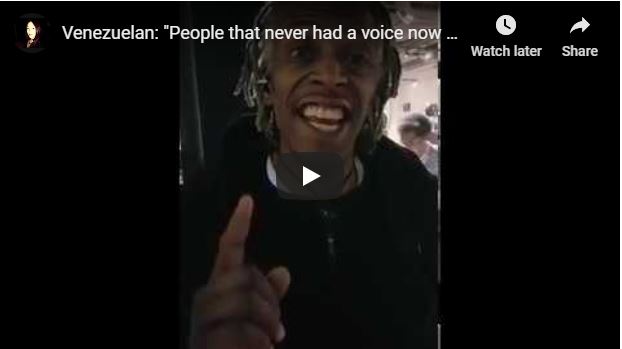 Last night (April 25th) I gave a talk on some of what I had seen in Venezuela, March-April, sharing photos and clips–with an emphasis of allowing people to hear voices our media generally silences or pretends don’t exist.

In Q & A, the issue of discrimination and racism in Venezuela was raised. This eloquent Venezuelan musician replied to the question so articulately, and disturbingly, that I asked him to re-address it on camera after the event.

Do listen to his words not only on the racism that still exists (not only in Venezuela but in media portrayal of Venezuelans), that in the 80s there actually was a crisis, unlike today, and that the people won’t let their revolution end.

“In 1999, for the 1st time every in any country in South America, a law was passed to not discriminate against people of colour. People that never had a voice now have one and will never give it up again. You can go to the remotest area in my country and everybody can read. Everybody knows their rights and knows that their voice counts.”

The Solidarity and Unity of Venezuelans against U.S. Interventionism

“What the Canadian public, the American public and the international community are watching is a huge Hollywood show.”

“I have a challenge for anyone in the opposition to simply answer one question: What would they do different? What is their plan? If they’re planning to go back to those great old days (sarcasm), the people are not having it. Two million militias, old people, young people, everybody knows what the United States is doing. My mother is 70, she’s about to join the militia!”

0 thoughts on “Racism in Venezuela: “People Who Never had a Voice Now Have One and will Never Give it up Again””