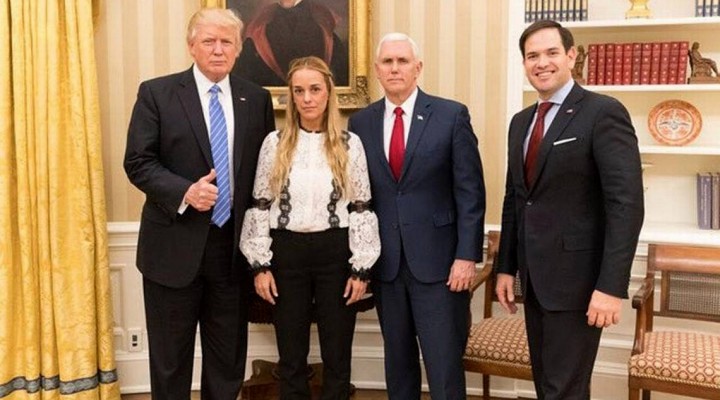 Given recent statements from Guaidó and top U.S. officials – as well as the recent death threat against Maduro voiced by U.S. Senator Marco Rubio (R-FL) via Twitter – it seems that if the U.S. is determined to use military means to topple Maduro, it will likely have to do so unilaterally or clandestinely.

On Sunday, the U.S.-backed and self-declared “interim president” of Venezuela, Juan Guaidó, announced that he would meet with the Lima Group on Monday to “formally propose” keeping “all options open” for the “liberation” of Venezuela. The Lima Group, composed of the U.S. and its allies and client states in the Americas, have all recognized Guaidó as the “legitimate” leader of Venezuela.

The likelihood that Guaidó would use this meeting to request U.S.-backed military intervention in Venezuela, a long-time aspiration of the Trump administration, increased substantially after the vice president of the Venezuelan government led by Nicolás Maduro, Delcy Rodríguez, announced that the government had credible information that Monday’s Lima Group meeting would approve “an international coalition” to invade Venezuela in order to topple Maduro and his Chavista government. The Lima Group meeting is also likely to result in the imposition of new sanctions targeting Venezuela, according to recent statements made by U.S. Secretary of State Mike Pompeo.

29.1K people are talking about this 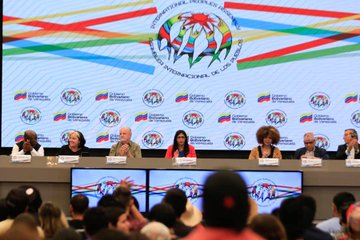 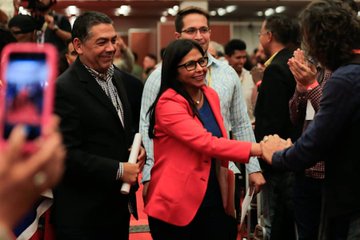 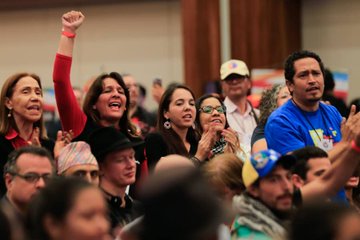 #BREAKING | Vice President of #Venezuela @DrodriguezVen announces that tomorrow, the Lima Group will approve an international coalition to invade Venezuela.

Some members of the Lima Group, however, have already announced that they are unwilling to endorse a military response to the Venezuelan crisis. On Monday, Peru’s Vice Foreign Minister Hugo de Zela Martínez stated at the beginning of the Lima Group conference that “the use of force, in any of its forms, is unacceptable” and that “the use of force is not a solution for what’s happening in Venezuela.”

Martínez further asserted that Peru and other members of the bloc were still pushing for a negotiated solution to the crisis and would consider only further diplomatic or economic actions to increase pressure on the Maduro-led government. Ultimately, the resolution of the crisis – according to Martínez – will come only if Maduro steps down and “free, fair and just elections” follow. The European Union also echoed Martínez’s comments on Monday, stating that military intervention in Venezuela “must be avoided.”

Such resistance from the Lima Group may have been unexpected from the United States, given the bloc’s willingness to endorse Guaidó after he swore himself in last month in a move that shocked and alienated many of his political allies within the Venezuelan opposition. Given recent statements from Guaidó and top U.S. officials – as well as the recent death threat against Maduro voiced by U.S. Senator Marco Rubio (R-FL) via Twitter – it seems that if the U.S. is determined to use military means to topple Maduro, it will likely have to do so unilaterally or clandestinely.

Following the Monday meeting between Guaidó and U.S. Vice President Mike Pence, military intervention was allegedly not discussed by the pair and Pence affirmed the U.S.’ commitment to Guaidó’s parallel government and his push for “freedom” in Venezuela.

Recent statements made by the Russian government suggest that the U.S. is planning to go the latter route. On Friday, Russian Foreign Ministry spokeswoman Maria Zakharova stated that the ministry had obtained evidence that “U.S. companies and their NATO allies are working on the issue of acquiring a large batch of weapons and ammunition in an Eastern European country for their subsequent transfer to Venezuelan opposition forces.” Zakharova also stated that the large planned weapons cache would include “heavy machine guns, grenade launchers, portable missile launchers and ammunition for light weapons and artillery systems.”

This revelation seems to support concerns that U.S. was seeking to follow the roadmaps of past regime-change “proxy” wars in Ukraine in Syria in order to topple Maduro’s government. As MintPress News previously noted, many of the same elements seen in the lead-up to Ukraine and Syria are also present in Venezuela — including the manufacture of a “humanitarian” justification for regime change; efforts to funnel arms and weapons into the country via its foreign borders; mass funding of the political opposition; and covert involvement of U.S. government agencies, particularly the CIA.

0 thoughts on “Pence, Guaidó Fail to Secure Lima Group Approval for US Military Intervention in Venezuela”