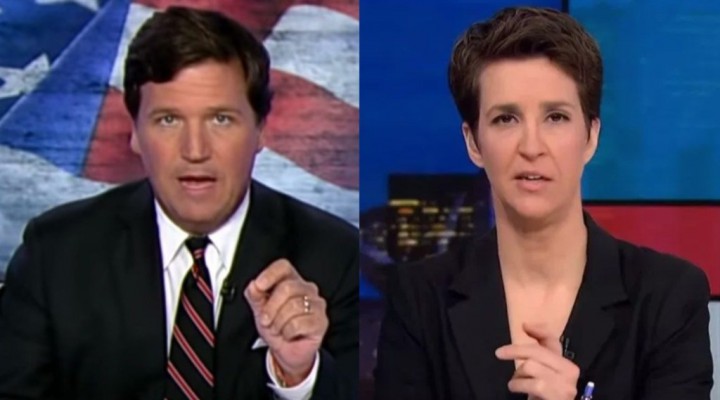 On a recent segment about Donald Trump’s controversial phone call with Vladimir Putin, Maddow expressed concern for the way the White House’s mustachioed Thanos wannabe has been unable to push back against Russian interests in Venezuela with sufficient aggression. She discussed Trump’s nonsensical claim that Russia isn’t active in the affairs of its ally Venezuela (which propaganda mouthpieces like Maddow are calling “interfering” now), then went on a rambling tirade about how this impedes Bolton’s bloodthirsty instincts as though that’s a bad thing.

“Hey, John Bolton, hey, Mike Pompeo, are you guys enjoying your jobs right now?” Maddow asked. “You each thought your job this week was to name and shame and threaten and counter Russian government involvement in Venezuela while sabre-rattling about how everyone better get out of the way because the US is really mad about it. Guys, turns out your actual job is figuring out why you work for a president who says whatever Vladimir Putin tells him. I mean, just to be clear here, how do you come to work anymore if you’re John Bolton?”

(I should interrupt my transcribing here to note that under no circumstances should anyone ever think of John “We know where your kids live” Bolton as a human being. No good can come of it.)

“I mean John Bolton, God bless you,” Maddow continued after running a clip of Bolton’s previous hawkish rhetoric toward Russia and Venezuela. “Good luck delicately and carefully shaving around that impressive mustache when you have to look at yourself in the mirror in coming days, Mister National Security Advisor. I mean, this is who you’re working for. You thought your job was to push Russia back because of what they’re doing in Venezuela. The president spent an hour on the phone with Vladimir Putin today; Putin told him he’s not in Venezuela, so now the new position of the US government is that Putin’s not in Venezuela. What’s your job?”

That’s right, the host of MSNBC’s top show dedicated a segment to hang-wringing over the notion that John Bolton wants to escalate tensions with Russia and Venezuela worse than they already are, but Trump won’t let him and it makes him sad.

Rachel Maddow opposed the Iraq invasion, which John Bolton played a fundamental role in manufacturing support for. She was elevated on MSNBC by Keith Olbermann, who himself made his name railing against the warmongering insanity of the Bush administration and is himself now just as much of a demented McCarthyite Russia hawk as Maddow.

It’s actually amazing how many journalists and pundits secured left-wing credibility by opposing the Iraq war, then spent the rest of their careers leveraging that left-wing credibility to circulate the exact same toxic imperialist mind viruses which led to the Iraq war. The Guardian‘s George Monbiot for example once attempted to make a citizen’s arrest of John Bolton for war crimes committed during the Iraq invasion; now he spends his time circulating war propaganda about Syria and Russia. The Intercept‘s Mehdi Hasan often writes angrily about the Iraq invasion to this day, and you’ll see him using that fact to justify the way he always scrambles to condemn whatever world leader the US war machine happens to have in its crosshairs, including Maduro and Assad.

Contrast Maddow’s “Trump is making John Bolton act too nice” monologue with a recent segment on Fox News’ Tucker Carlson Tonight, conducted in the aftermath of last week’s attempt at a military coup by opposition leader Juan Guaido. Journalist Anya Parampil appeared on the show and delivered a scathing criticism of the Trump administration’s heinous actions in Venezuela based on her findings during her recent visit to that country. She was allowed to speak uninhibited and without attack, even bringing up the Center for Economic and Policy Research study which found Trump administration sanctions responsible for the deaths of over 40,000 Venezuelans, a story that has gone completely ignored by western mainstream media.

Carlson introduced the interview with a clip from an earlier talk he’d had with Florida Congressman Mario Diaz-Balart, who supports direct military action to overthrow Maduro and whose arguments Carlson had attacked on the basis that it would cost American lives and cause a refugee crisis. Parampil said the media is lying about what’s happening in Venezuela and compared Guaido’s coup attempt to a scenario in which Hillary Clinton had refused to cede the election, banded together 24 US soldiers and attempted to take the White House by force.

“I was there for a month earlier this year,” Parampil said. “The opposition has no popular support. Juan Guaido proved today, once again, that he will only ride in to power on the back of a US tank. And what’s more, we hear about a humanitarian crisis there, Tucker, but what we never hear is that is the intended result of US sanctions that have targeted Venezuelans since 2015, sanctions which according to a report that was released just last week by the Center for Economic and Policy Research has led to the deaths of 40,000 Venezuelans, and will lead to the death of thousands more if these sanctions aren’t overturned. President Trump, if he truly cared for the Venezuelan people, and the American people for that matter, he would end this disastrous policy. He would end the sanctions, and he would look into John Bolton’s eyes, into Elliott Abrams’ eyes, into Mike Pompeo’s eyes, and say you are fired. You are leading me down a disastrous path, another war for oil. Something the president said–he was celebrated by the American people when he said Iraq was a mistake, and now he’s willing to do it again.”

“I believe in an open debate,” Carlson responded. “And I’m not sure I agree with everything you’ve said, but I’m glad that you could say it here. And you were just there, and I don’t think you’d be allowed on any other show to say that.”

“No I certainly don’t,” Parampil replied. “And I really appreciate you giving me the opportunity, because President Trump promised to drain the swamp, and he flooded his national security team with that exact swamp.”

“Well I agree with that actually,” said Carlson, who had a heated exchange with Bolton last year immediately before his appointment as National Security Advisor.

Some people are going to twist this article into “Hurr, Caitlin loves Tucker Carlson!”, and there’s ultimately nothing I can do about that because this is the internet and people are morons. But for the record my point here is not that Tucker Carlson is awesome, it’s that it’s outrageous that in order to hear dissident views about Venezuela on American mainstream media, you have to turn on Tucker fucking Carlson. Unlike Rachel Maddow, Carlson was wrong about the Iraq invasion and supported it up until 2004. He plays into America’s idiotic culture wars, frequently on the more idiotic side of each issue, and he’s said hawkish things about Venezuela in the past. It’s absolutely horrifying that this is the closest thing that America has to a platform for sanity in the mainstream media.

America’s political landscape has restructured itself so much and the need to propagandize the masses has grown so severe that the liberal pundits are attacking the foreign policy of a widely reviled president for being insufficiently hawkish, and the only pundit with a foot anywhere near the brake pedal works on the news media network which was most aggressive in selling the American public on the Iraq invasion. Trump’s ostensible opposition are not just letting his worst foreign policy impulses run unchecked, but are actually egging him on, and the only ones asking meaningful questions about it are the leftists and antiwar voices who are aggressively silenced, and Tucker motherfucking Carlson. This is insane, and it needs to end.