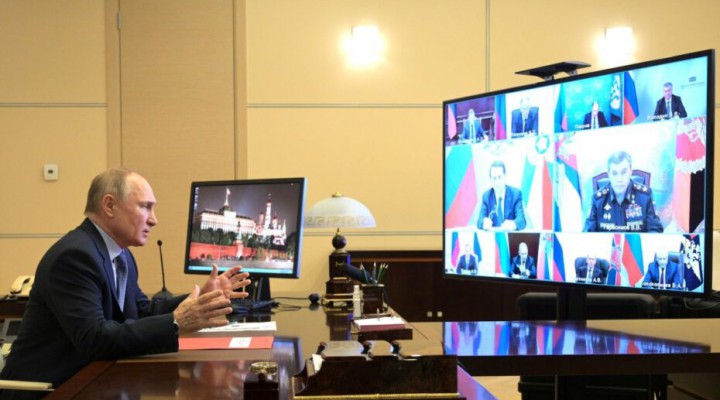 Washington must surely know that its escalations will be met with equal force from Russia and China.

President Joe Biden wasn’t expecting Russia’s rapid slap back. He assumed, wrongly, that he could hit Moscow with a new round of sanctions (based on slanderous claims) and look as if he were chewing gum and acting the hard man.

Then slap. Russian responded immediately and firmly. Ten U.S. diplomats are to be expelled in a reciprocal response to Biden’s executive order last week to expel Russian diplomats.

Laughably, the Biden administration was aghast at the Russian sanctions. A State Department spokesman decried the Russian move as an “escalation” – unlike the American sanctions which, he said, were “proportionate”.

Proportionate to what? Well, to unfounded claims by the Biden administration that Russia had interfered in the 2020 presidential election, had launched cyberattacks on government and private companies, and was threatening Ukraine with aggression. But what if all these claims are baseless, which they are?

Then the latest American sanctions (like dozens of previous rounds) are not at all “proportionate”. They are in fact a provocative escalation of hostilities toward Russia.

Absurdly, the American side accuses Russia of escalation when the reality is that Russia is responding proportionately. Washington plies a Russophobic regime in Kiev with billions of dollars-worth of lethal weaponry, encouraging the regime to violate a ceasefire with ethnic Russian separatists in Eastern Ukraine. Moreover, the U.S. and other NATO forces also deploy troops, warships, and surveillance aircraft to support the Kiev regime.

Then in this context of a mounting threat on its doorstep, Russia deploys defense forces within its territory on the border with Ukraine. And whoa, the U.S., Europe, and NATO go hysterical with accusations of Russia escalating tensions.

Again, the objective view is that Russia is reciprocating with proportionate counter-measure to prior American escalation.

Another instance of this dynamic was the planned deployment of two U.S. guided-missile destroyers last week to the Black Sea. At a time of spiraling tensions, the ordering of the USS Donald Cook and USS Roosevelt to the Black Sea was an act of madness. The Pentagon may have tried to pretend it was just another routine, innocent passage allowed by the 1936 Montreux Convention. Come off it. This was a provocative show of force in support of the Kiev regime at a time of dangerous tensions.

In any case, following news of the intended transit of the U.S. warships via the Turkish Straits, the Russian Black Sea Fleet deployed a squadron of vessels to meet the Americans. On April 14, the day of the transit, the Americans called off the deployment. The Pentagon didn’t offer an explanation. But others can see that the American side blinked, or deescalated, after the Russian side showed it was not tolerating an American escalation. A proportionate, reciprocal response by Russia restored the balance of power and averted what could have been a serious armed confrontation.

There was a time when Washington could swagger around, chewing gum, wielding a big stick, and shooting up others with “gunboat diplomacy” – and arrogantly expect to get away with murder.

When President Biden’s top envoys met with Chinese counterparts in Alaska last month, they thought they could browbeat with impunity, as usual, over contrived American concerns about human rights and other hobby horses. The Americans were shocked when China’s top diplomats Yang Jiechi and Wang Yi gave Antony Blinken and Jake Sullivan a tongue lashing over America’s genocidal history and rank hypocrisy. Thus, American attempted rhetorical escalation was in the end made to deescalate with tail between legs by a forceful proportionate response.

Likewise, when Biden unveiled his “tough” sanctions against Russia last week over spurious allegations, that was meant to be the end of it, as far as the Americans presumed. Then slap. Russia hit back the following day. And the hubristic Americans don’t know what to make of it. The confused reaction is palpable. What’s this? You mean we just can’t impose our diktat unilaterally?

There is a hint that Biden and his team are beginning to realize the old game of American arrogance and bullying is over. Before he announced the sanctions, Biden phoned Russian President Vladimir Putin two days earlier to give him notice. Biden characterized the conversation as “candid and respectful”.

He also said he informed “President Putin” that “we could have gone further [in sanctions] but we chose not to do… I chose to be proportionate. The United States is not looking to kick off a cycle of escalation and conflict with Russia. We want a stable, predictable relationship.”

That sounds as if Biden is almost apologizing to Putin about the sanctions beforehand and pleading with him to not hit back.

The American president also revealed that in the same phone conversation he invited his Russian counterpart to a face-to-face summit in Europe later this summer. Austria is being touted as a possible neutral venue. The meeting is for talks “on a range of issues facing both of our countries”.

It is only right and proper, indeed imperative, that the two biggest nuclear powers re-open communications at the highest level in an earnest and sincere way to safeguard global peace. Russia has always consistently called for such a dialogue. But the dialogue must be conducted with mutual respect and bereft of stupid accusations and provocations.

Washington must surely know that its escalations will be met with equal force from Russia (and China). And Biden seems to realize that he has to take the escalator sideways to avoid such a dead-end direction of American policy.

Washington’s Follies Are Dangerous to Us and to the World

0 thoughts on “Escalate to Deescalate… Then Biden Takes Escalator Sideways”