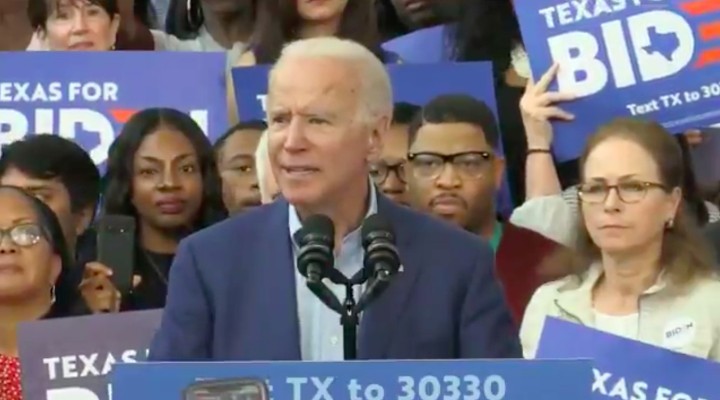 Back in January, well before the Democratic primary race had taken on its current composition, independent journalist Ruth Ann Oskolkoff reported that a source had heard from high-level Democratic Party insiders that they were planning to install Joe Biden as the party’s nominee, and to smear Bernie Sanders as a Russian asset.

“On January 20, 2020 at 8:20 p.m. PDT I received a communication from a reliable source,” Oskolkoff wrote. “This person had interactions earlier that evening with high level party members and associates of the Democratic National Committee (DNC) who said that they have now selected Biden as the Democratic Party nominee, with Warren as the VP. They also said the plan is to smear Bernie as a Russian asset.”

Now, immediately before Super Tuesday, we are seeing establishment candidates Pete Buttigieg and Amy Klobuchar drop out of the race, both of whom, along with former candidate Beto O’Rourke, are now suddenly endorsing Biden. Elizabeth Warren, the only top-level candidate besides Sanders who could be labeled vaguely “left” by any stretch of the imagination, has meanwhile outraged progressives by remaining in the race, to the Vermont senator’s detriment.

The day before Super Tuesday also saw The Daily Beast, whose corporate owner IAC has Chelsea Clinton on its board of directors, publishing an article titled “Kremlin Media Still Like Bernie, ’Cause They Love Trump” which aggressively smears Sanders as a tool of the Kremlin.

Prior to the South Carolina primary, Russian state media were touting Bernie Sanders as the most likely Democratic nominee, and it won’t be surprising if they do the same after Super Tuesday https://t.co/mH98PVmcjr

This latter development is becoming a conspicuously common line of attack against Sanders and, while we’re on the subject, also tracks with a prediction made by journalist Max Blumenthal back in July of 2017. Blumenthal told Fox’s Tucker Carlson that “this Russia hysteria will be re-purposed by the political establishment to attack the left and anyone on the left — a Bernie Sanders-like politician who steps out of line on the issues of permanent war or corporate free trade, things like that — will be painted as Russia puppets. So this is very dangerous, and people who are progressive who are falling into it need to know what the long-term consequences of this cynical narrative are.”

So we’re seeing things unfold exactly as some have predicted. We’re seeing the clear frontrunner smeared as a tool of Vladimir Putin, accompanied by a deluge of op-eds and think pieces from all the usual warmongering mass media narrative managers calling on so-called “moderates” to rally around the former Vice President on Super Tuesday.

Sanders has not been pulling in anywhere near the numbers he’d need to pull to prevent a contested convention. This means that even if he gets more votes than any of his primary opponents, party leaders can still overrule those votes and appoint Biden as their nominee to run against Trump. Establishment spinmeisters as well as all Sanders’ primary opponents have been working to normalize this ahead of time.

"Whatever the case for either Amy Klobuchar and Elizabeth Warren…neither is going to be the nominee. And…it’s not going to be Mike Bloomberg either. So it’s Bernie Sanders or Joe Biden." Tomorrow, if you live in one of 14 states, you can choose Biden.https://t.co/btuPbGtWxG

The only problem? Biden’s brain is turning into sauerkraut.

There are two new clips of video footage making the rounds today, one featuring Biden at a rally telling his supporters that tomorrow is “Super Thursday”, and another featuring the former VP saying (and this is a direct quote), “We hold these truths to be self-evident. All men and women created — by the — you know, you know the thing.”

I’ve written about Biden’s recent struggles to form coherent sentences before, and it seems to be getting worse. There’s simply no comparing the befuddled, fuzz-brained man we see before us today with the sharp, lucid speaker we were seeing even a few years ago. The man’s brain does not work.

And yeah, it’s unpleasant to have to keep pointing this out. I’m not loving it myself. I resent Biden’s handlers and the Democratic Party establishment for making it necessary to continually point out an old man’s obvious symptoms of cognitive decline. But it does need to be pointed to, and it’s creepy and weird that they’re continuing to prop up this crumbling husk of a man while pretending that everything’s fine.

Imagine putting all your eggs in the Joe Biden basket. https://t.co/nRPX4gqol5

Not that Biden would be an acceptable leader of the most powerful government on earth even with a working brain; he’s a horrible war hawk with an inexcusable track record of advancing right-wing policies. But even rank-and-file Americans who don’t pay attention to that stuff would plainly see a man on the debate stage opposite Trump who shouldn’t be permitted near heavy machinery, much less the nuclear codes. And Trump will happily point that out.

It’s been obvious since 2016 that the Dems were going to once again sabotage the only candidate with a chance of beating Trump in favor of a scandalously inappropriate candidate, but wheeling out an actual, literal dementia patient for the role is something not even I would have imagined.