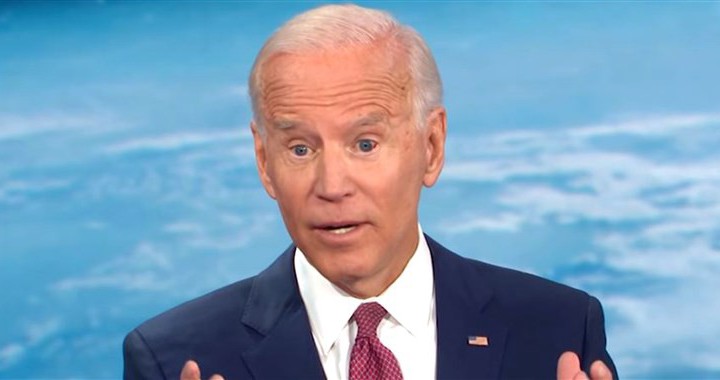 I didn’t watch the last Democratic presidential primary debates because I figured that without Tulsi Gabbard in there shaking things up it would be a boring, vapid parade of insubstantial verbal foam, and I love myself too much to go through such a horrible ordeal. By all accounts my prediction was correct, but I did miss one thing that’s been making the rounds in video clips for the last couple of days which I find absolutely bizarre.

Most of you have probably heard about Biden’s infamous “record player” comment by now, but for those of you who missed it, Biden was asked by debate moderator Linsey Davis to defend some comments he made about America’s problems with racism in the 1970s, and he responded by essentially saying that Black people don’t know how to raise their kids so they need to be taught how by social workers. Biden has been receiving mainstream criticism for his racist and paternalistic position, along with plenty of mockery for saying that parents need to be told to “make sure you have the record player on at night” so that kids hear enough words in early childhood.

It is pretty clear that Biden was trying to communicate an idea that is premised on a deeply racist and condescending worldview, so it’s to be expected that people would want to talk about that. It’s also to be expected that people would be making jokes about how the cute old man said “record player” like a grandpa. But what isn’t being discussed nearly enough is the fact that what Biden said was also a barely coherent, garbled word salad stumbling out of a brain that is clearly being eaten alive by a very serious neurological disease.

I’ve typed out a transcript of what Biden actually said, verbatim. There are no typos. I’ve also noted where Biden closes his eyes, probably to concentrate, which he does whenever he seems to be struggling especially hard to string words together. Try to read through it slowly, word-for-word, resisting the instinct to mentally re-frame it into something more coherent:

“Well they have to deal with the — Look, there is institutional segregation in this country. And from the time I got involved I started dealing with that. Redlining. Banks. Making sure that we’re in a position where — Look, talk about education. I propose that what we take is those very poor schools, the Title 1 schools, triple the amount of money we spend from 15 to 45 billion a year. Give every single teacher a raise that equal [closes eyes] raise to getting out — the sixty-thousand dollar level.

“Number two: make sure that we bring into the help the — [closes eyes] the student, the, the teachers deal with the problems that come from home. The problems that come from home. We need — We have one school psychologist for every fifteen hundred kids in America today. It’s crazy. The teachers are reca — Now, I’m married to a teacher. My deceased wife is a teacher. They have every problem coming to them. [Closes eyes briefly] We have make sure that every single child does in fact have three, four, and five year-olds go to school — school, not daycare. School. We bring social workers into homes of parents to help them deal with how to raise their children. It’s not that they don’t wanna help, they don’t want — they don’t know quite what to do. Play the radio, make sure the television, [closes eyes tightly] the — ‘scuse me, make sure you have the record player on at night, the-the-the-the phone, make sure the kids hear words. A kid coming from a very poor school, [closes eyes] a very poor background, will hear four million words fewer spoken by the time they get there.”

Notice how it gets more garbled the longer he speaks. The response I transcribed was about eighty seconds in length. That was just one small part of a debate in which the former vice president performed no better and forgot three of his fellow candidates’ names.

Compare this befuddled, incoherent mess with footage of a younger Biden, like his famous quip about how Rudy Giuliani only ever mentions “a noun and a verb and 9/11” in a sentence, or this clip where he said if Israel didn’t exist America would have to invent it to protect its interests in the Middle East. Biden has always been notoriously gaffe-prone, but he was also sharp, alert, and articulate enough to deliver a punchline. As journalist Michael Tracey has been pointing out, what we’re consistently seeing over and over again from the former vice president now are not “gaffes”, but clear signs of cognitive decline. Contrast the difference between Biden’s younger footage and what was seen at the last debate with footage of Bernie Sanders throughout the decades, who has remained virtually identical save for appearance and hoarseness. Age does not account for this difference. Biden’s brain is dying.

It is certainly understandable that people are concerned about the presidential frontrunner having a racist worldview. But what’s really weird and creepy is how few people are discussing the obvious fact that the presidential forerunner is also clearly suffering from the early stages of some kind of dementia. The brain that spouted the gibberish transcribed above would probably score poorly on a basic test for the early stages of Alzheimer’s disease, yet discussion of his inability to complete a coherent sentence is relegated to the margins of political discourse. This is someone who is campaigning to have access to the nuclear codes, yet we’re only talking about how he’s kind of racist and not about the fact that his brain is turning into Swiss cheese right before our eyes. It’s freaky.

It’s freaky, but it kind of makes sense. One common difficulty in getting early treatment for people with Alzheimer’s disease is that those suffering from it often go to great lengths to hide their impairments, and another difficulty is that their families are often deeply in denial about their loved one’s mental decline. According to the Mayo Clinic, “Some people hide their symptoms, or family members cover for them. That’s easy to understand, because Alzheimer’s dementia is associated with loss, such as loss of independence, loss of a driving privileges and loss of self.”

I think we’re seeing precisely this happening, both with Biden, and with his supporters. Biden himself is clearly doing everything he can to feign mental competency, and as a powerful politician aiming to accomplish a lifelong ambition to become the US president he’d certainly have a lot egoically invested in doing so. His supporters seem to be doing all kinds of denial mental gymnastics around his cognitive decline as well; just check out the responses to this Washington Post tweet for its article about Biden’s “record player” response.

Here are a few examples:

“Don’t pretend you didn’t understand what he was saying.”

“Actually, I recently saw a turntable for sale at Best Buys & vinyl records are back on the market. Try to keep up, WaPo.”

“My 22 year old son and all his friends play records on record players these days. If you’re insinuating that Joe is out of touch, you’re out of touch.”

“Actually currently, there are some people playing record players because they find the vinyl record has better sound quality. I think you are just picking and choosing who to go after.”

“He was saying they not hearing enough words. We did. We were read to. We listened to children’s albums. We had conversations. He was trying to get at the importance of those things. He didn’t do a great job on communicating it but he was right.”

“Twitter snark aside, there are studies to back up that claim.”

“Honestly…so what. I got the sentiment.”

“Not sure why people are being so condescending. Vinyl outsold CD last year, so, you know, record players are everywhere these days. You could say he’s stuck in the past or you could say he’s trending. Be kind.”

We saw this same impulse to protect and compensate for Biden’s mental decline from audience members during the debate, who gasped out loudwhen Julian Castro suggested that Biden had forgotten what he’d said two minutes ago. Many rank-and-file Democrats are so desperate for an end to an administration that is making them increasingly anxious and neuroticthat they find it cognitively easier to compartmentalize away from the obvious fact that Biden is in a state of mental decline than to turn and face that reality. So they make excuses and pretend that his demented word salads are perfectly rational, hip references to the resurging popularity of vinyl records.

The only people who are absolutely acutely aware of Biden’s cognitive decline and yet still want him to become president are his handlers. There is no way his consistent pattern of verbal unintelligibility has gone unnoticed by those who are responsible for facilitating his election, and indeed The Hill reports that his “allies” have been floating the idea of scaling back his campaign appearances and scheduling them for earlier in the day when he’s not tired to help minimize his “verbal flubs”. These people are aware that Biden is losing his mind, but they are pushing him toward the White House anyway.

If Biden supporters were really intellectually honest with themselves about what’s going on, they’d see that they don’t actually want Joe Biden to be president, they want his unelected, unaccountable handlers to be president. From a position of intellectual honesty they’d be taking the position of arch neocon Bill Kristol, who once said he’d “prefer the deep state to the Trump state.”

And of course that wouldn’t be a first among US presidents even in recent history. Ronald Reagan had early signs of Alzheimer’s disease during his presidency according to his own son, and George W Bush was infamously just a puppet of his handlers like Dick Cheney. Indeed it would be possible to have an actual, literal Jim Henson puppet as president of the United States without America’s unelected power establishment skipping a single beat.

But that’s exactly the point: having a real human being in there with even a semi-functional mind can put some inertia on the most sociopathic impulses of America’s unelected permanent government. Both Trump and Obama are of course horrible presidents who have continued and expanded the Bush administration’s most evil agendas, but Obama slowed down the push to arm Ukraine against Russia and slammed the brakes on a full-scale bombing campaign on Syria, while Trump was unable to get along with John Bolton and is losing interest in Venezuela while resisting the push to start new wars. Despite all their flaws, they’ve resisted the permanent government’s worst impulses in some key ways. If it’s just Biden’s handlers and the unelected power establishment, there’s no humanity anywhere near the brake pedal.

So this makes sense to talk about no matter how you look at it. But we’re not. In mainstream discourse we’re speaking as though this is just a charmingly gaffe-prone old man who makes a few controversial statements from time to time but would still make a fine president, when really he shouldn’t even be allowed a driver’s license.

And I just find that really creepy and uncomfortable. As someone who’s never been able to leave elephants in rooms alone, the fact that the leading presidential contender is neurologically incapable of speaking coherently for eighty seconds sticks out like dog’s balls and it’s absolutely freakish that this isn’t front and center of our political discourse right now. Biden’s dementia should be the very first thing we discuss whenever his name comes up, not the last.