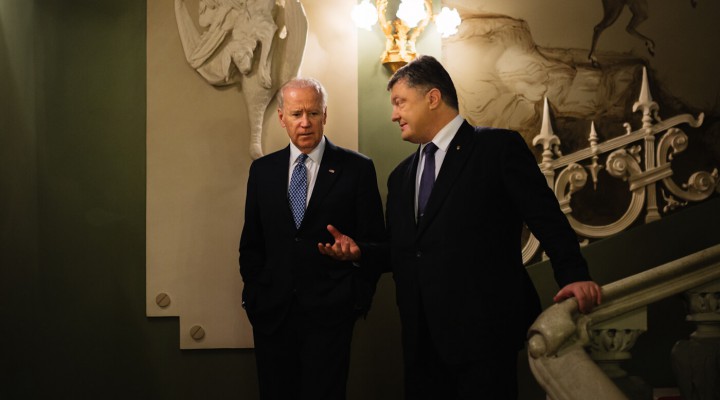 While working behind the scenes to shape the post-Maidan Ukrainian government to their liking, powerbrokers in Washington — Biden included — have done all they could to downplay the U.S. role.

MPN- Former Vice President Joe Biden launched his candidacy for the American presidency on Thursday morning with the release of his first campaign video, ‘’America Is An Idea.’ The first word from the candidate’s mouth — “Charlottesville,” a town now synonymous with neo-Nazi hate in the U.S. — is the overwhelming focus of the ad, which attacks Trump for his widely criticized “moral equivalence” between neo-Nazis and anti-fascists.

After leveraging his power as VP to buttress a neo-Nazi coup in Ukraine w/ official US backing, Biden cynically exploits the violence of neo-Nazis in Charlottesville to underscore the vacuous message of his campaign launch video that “America is an idea” https://youtu.be/VbOU2fTg6cI

36 people are talking about this

Biden argues that “We are in a battle for the soul of this nation,” after bloviating over b-roll of the infamous torch-lit march the night prior to the murder of activist Heather Heyer by a supporter of Adolf Hitler. “Folks, America is an idea,” Biden says.

Heather Heyer’s mother, Susan Bro, seemingly condemned the exploitation of her daughter’s untimely demise, saying “I wasn’t surprised. Most people do that sort of thing. They capitalize on whatever situation is handy.”

Biden’s centering on the neo-Nazi violence in Charlottesville has also been roundly denounced by Charlottesville locals and activists who bore witness to it on Twitter and other social media. Yet, the candidate has received little scrutiny over the years for his role in abetting the neo-Nazi renaissance in Ukraine that followed the fascist takeover of the government, known as the Euromaidan.

Blowback from the U.S. government support for the far-right coup has already struck Charlottesville. The U.S. previously gave military assistance to the Azov Batallion, a neo-Nazi paramilitary organization that has been incorporated into the Ukrainian national guard. One neo-Nazi contingent present in Charlottesville, comprised of four men indicted by the FBI last year, trained under Azov. During the bloody clashes in Virginia, those men were caught on camera pushing down and repeatedly punching an African-American protester as well as choking and bloodying two women.

Meanwhile, the slayer of 50 Muslims in a white supremacist attack on a mosque and Islamic center in New Zealand earlier this year claimed in his manifesto to have trained under Azov and had a symbol associated with the group on his flak jacket.

Biden’s role in fueling the revival

It is widely known by international observers of Ukraine that Joe Biden, as vice president, served as Obama’s chief operative when it came to matters pertaining to the country.

In late 2013, Biden seemed to have been a key player in former President Victor Yanukovych’s bid to secure a loan from the International Monetary Fund.

Later, Biden would go on to boast that, “after three months into the demonstrations,” he personally told Yanukovych to “walk away” from Ukraine. Yanukovych has lived in exile in Russia since the takeover.

As someone who witnessed the murder of Heather Heyer in #Charlottesville I am deeply disturbed by Joe Biden’s decision to exploit neo-Nazi violence there for political gain but not surprised. When the political winds blow in a different direction, Biden has allied with neo-Nazis

As the U.S. and violent protests were turning up the heat on the government, the U.S. was doing all it could to mold the government to its liking, and Biden played a pivotal role in this process.

In February 2014, leaked recordings emerged of Assistant Secretary of State for European Affairs Victoria Nuland and Geoffrey Pyatt, the U.S. ambassador to Ukraine, plotting to unite the Ukrainian opposition to take over the government. They sought to use Biden as an intermediary with the three main leaders of the opposition, hoping he could get the details of the U.S. plan for the country to “stick” with the trio.

Washington had its favorite of the three picked already. The most popular of them had little political or economic experience (he was a professional boxer), while the other guy, Oleh Tyahnybok, had longstanding ties to neo-Nazis, which would have legitimized Russian claims that the uprising was of a fascist nature. Tyahnybok is the leader of the Svoboda Party, a fascist organization that refers to the Holocaust as the “light period” and bans Jews from participation.

One Svoboda leader had posted a Facebook message to Jews in 2017 who were upset with a statue of Symon Petliura, who murdered tens of thousands of Jews: “If you want to live with us, get used to our rules, and if not, go to your land or be punished.” In the leaked audio, Pyatt said the “problem is going to be Tyahnybok and his guys.”

Nuland responded by saying she thought their favored opposition leader, Arseniy Yatseniuk, needed “Tyahnybok on the outside. He needs to be talking to them four times a week, you know.”

This is the plan that Nuland said Biden was “willing” to help further.

By April, Biden was delivering aid packages personally to the opposition. In Ukraine, he met with “leading members of parliament, including several candidates for the presidency — speaking to them of Ukraine’s “heroism” and humiliations. “We want to be your partner, your friend in the project. And we’re ready to assist,” Biden reportedly said.

Among those he met with: Oleh Tyahnybok.

Continuing corruption after the coup

Ukrainian media portrayed the meeting with a different tone. A rough translation of Interfax quotes the then-VP:

Especially in terms of corruption in Ukraine, he stressed, ‘You are unable to overcome corruption. The world will not tolerate this, nor can we solve this problem. You keep stressing that you need help in the energy sector, but you also have this system completely corrupt.’”

Like his stance on neo-Nazism, Biden’s stance on corruption seems to change with the political winds.

As journalist and lawyer Kevin Zeese recently noted, WikiLeaks previously reported that Biden “pledged U.S. financial and technical assistance to Ukraine” for fracking projects. Just months after Yanukovych was ousted and forced to flee to Russia, Biden’s son, Hunter, was put on the board of directors of Burisma Holdings, the largest private gas company in the country.

As the coup ended, the Washington-backed government eventually took shape under the auspices of billionaire Petro Poroshenko, who became the president in June. Biden may have gotten what he wanted — an ostensible end to corruption in Ukraine’s energy sector. At least that was the goal of Prosecutor General Viktor Shokin, who opened an investigation into Burisma Holdings.

And so daddy came to the rescue. Here is Joe Biden, in his own words:

I got all the good [assignments]. And so I got Ukraine. And I remember going over, convincing our team, our leaders to — convincing that we should be providing for loan guarantees. And I went over, I guess, the 12th, 13th time to Kiev. And I was supposed to announce that there was another billion-dollar loan guarantee. And I had gotten a commitment from Poroshenko and from Yatsenyuk that they would take action against the state prosecutor. And they didn’t…I looked at them and said: ‘I’m leaving in six hours. If the prosecutor is not fired, you’re not getting the money.’ Well, son of a bitch — he got fired. And they put in place someone who was solid at the time.”

Biden made those comments at a Council on Foreign Relations event in 2018, during which he sat on a panel with Michael Carpenter, his former underling at the White House, who helped egg on the Maidan coup.

While working behind the scenes to shape the post-Maidan government to their liking, powerbrokers in Washington — Biden included — have done all they could to downplay the U.S. role.

In an article published last year, Biden and Carpenter co-wrote that “Putin and his associates have long peddled a conspiracy theory that accuses the United States of engineering popular uprisings in… Ukraine in 2004 and 2014.”

Yet Nuland’s own comments at the time (2014) reveal the farcity of the claim:

Since Ukraine’s independence [read: the collapse of the Soviet Union] in 1991, the United States has supported Ukrainians as they build democratic skills and institutions, as they promote civic participation and good governance, all of which are preconditions for Ukraine to achieve its European aspirations.

We have invested over $5 billion to assist Ukraine in these and other goals that will ensure a secure and prosperous and democratic Ukraine.”

State Department spokeswoman Nicole Thompson later reaffirmed that $5.1 billion at the expense of U.S. taxpayers was mostly expended via the U.S. Agency for International Development — a CIA cutout — and the Pentagon, among other institutions.

The claim from Carpenter and Biden that Putin has peddled conspiracy theories of the U.S. engineering popular uprisings is evidently the kind of deflection the former has a reputation for.

Carpenter is a senior non-resident fellow at the Atlantic Council think tank, which is funded by Gulf petro-monarchies and U.S. defense contractors. In addition to special advisor to the vice president, Carpenter’s resume also includes the State Department, the National Security Council, and the Pentagon.

Last year, when the neo-Nazi speaker of Ukraine’s parliament, Andriy Parubiy, was invited for a talk hosted at a U.S. Senate building, journalist and author Max Bumenthal asked Carpenter, “Did you think it was a good idea to bring Parubiy, who has founded two neo-Nazi parties, to the Senate for Paul Ryan to meet with him?”

Look, I think Andriy Parubiy is a conservative nationalist who is also a patriot [who] cares about his country. I don’t think he has any neo-national, neo-Nazi inclinations nor background. I mean, a lot has been made of this. Frankly, I think it’s mostly Russian propaganda.”

Parubiy founded the Social National Party and the Patriot of Ukraine party. The Patriot of Ukraine later branched off into the Azov Battalion and Right Sektor, another fascist paramilitary with its own troubling record of violence against minorities. Both served as shock troops during the Maidan.

Following his confrontation with Carpenter, Blumenthal commented on the Social National Party that “if it sounds like the National Socialist party, that’s because it was directly inspired by the Nazi party.” 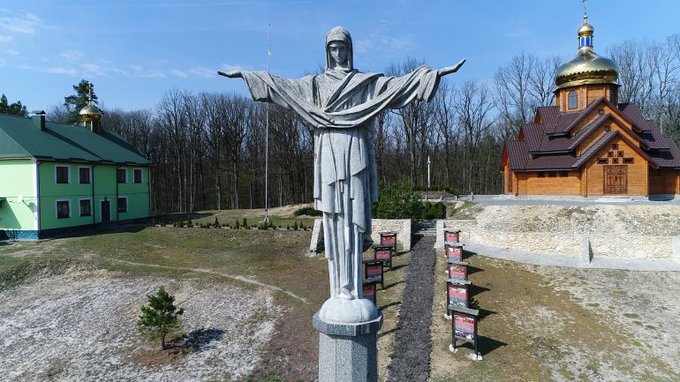 On Tuesday, Parubiy tweeted “Glory to the heroes!” and a number of other remarks honoring the Ukrainian Insurgent Army (UPA), a paramilitary that slaughtered thousands of Jews and tens of thousands of Poles. According to the online web journal Defendng History, which is dedicated to exposing the glorification of Nazi collaborators in Ukraine, UPA’s “core was composed of Holocaust perpetrating former Auxiliary Police.” UPA’s political directors were also affiliated with a faction of the Organization of Urainian Nationalists led by Nazi collaborator and pogromist Stepan Bandera.

Bandera was involved in the complete ethnic cleansing of Jews from the city of Lviv, once a thriving nerve center of Yiddish culture, with Jews forming 32 percent of the population prior to the pogroms.

More than a decade before the Euromaidan coup, which saw Parubiy gain prominence he could have never attained otherwise, the Ukrainian House Speaker was the chairman of a committee that built a monument to Bandera in Lviv.