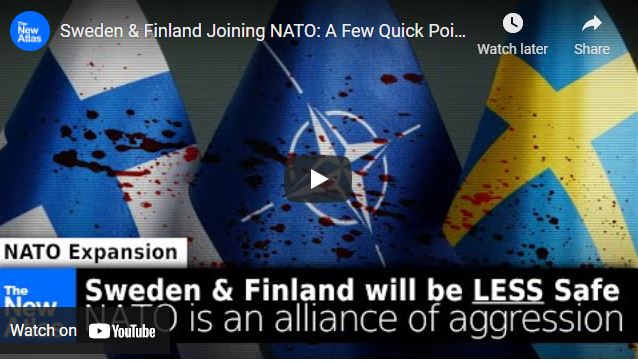 A few quick points about Sweden and Finland joining NATO:

1. Nations aren’t given a choice to join – they either join or the US removes the government and installs one that will;

2. Neither Sweden nor Finland face any threat from any nations, let alone Russia;

3. The supposed “threat” is that Russia has invaded Ukraine “without provocation” and could invade anyone else next – the “WMD” lie told now to advance US foreign policy objectives;

4. Now that Sweden and Finland are joining NATO, they will be less secure – the next time NATO wages a war of aggression thousands of miles from its own borders, Swedish and Finnish troops will be sent to die there and both nations’ treasuries emptied in the process;

5. NATO expansion is a factor of US hegemony – an unwillingness to accept multipolarism and its attempt to continue imposing unipolar primacy.