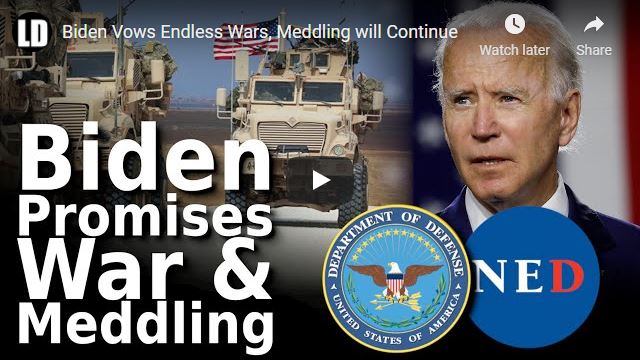 US foreign policy has clearly continued in the same direction, without missing a beat. Unlike in previous transitions in the White House, this time US President Joe Biden has not even really tried to promise even the faintest hope that it wouldn’t.

There were a few glimpses of remote hope – particularly regarding the possibility the US wouldn’t abandon its last arms treaty with Russia, New START (Strategic Arms Reduction Treaty) – and Biden’s promise of returning to the Joint Comprehensive Plan of Action (JCPOA), also known as the Iran Nuclear Deal.

However, in Biden’s first speech regarding foreign policy since taking office, now posted on the White House’s official website and titled, “Remarks by President Biden on America’s Place in the World,” reveals that, if anything, US belligerence on the global stage is set to only expand.

“America is back.  Diplomacy is back at the center of our foreign policy.”

Biden’s opening remarks attempt to suggest that America has drifted away under his predecessor US President Donald Trump. But when he says “America is back,” we are left to assume he means “back” to what the US was doing under the administration of US President Barack Obama under which he served as vice president.

This was a president elected into office by the American people to end the wars of his predecessor, US President George W. Bush. Not only did he fail to end those wars – one in Iraq and one in Afghanistan – he expanded both. He also started several new wars including in Libya, Syria, and Yemen.

Under the administration of Obama-Biden, the US also overthrew the government of Ukraine in 2014 precipitating deadly violence in the nation’s eastern region.

Obama also continued Bush-era policies aimed at overthrowing the government of Venezuela and instituted the so-called US “pivot” to Asia in which US meddling was expanded in a bid to peel Southeast Asian states away from China’s orbit – or create an arc of chaos to disrupt China’s rise, trying.

And in Biden’s recent foreign policy speech – he has vowed to continue all of this.

Myanmar: We will “Impose Consequences on Those Responsible”

After declaring his intentions of meeting the challenges of “the growing ambitions of China to rival the United States and the determination of Russia to damage and disrupt our democracy,” he immediately set upon Myanmar – which he continuously referred to in his speech as “Burma” – the British colonial nomenclature for the now independent nation. 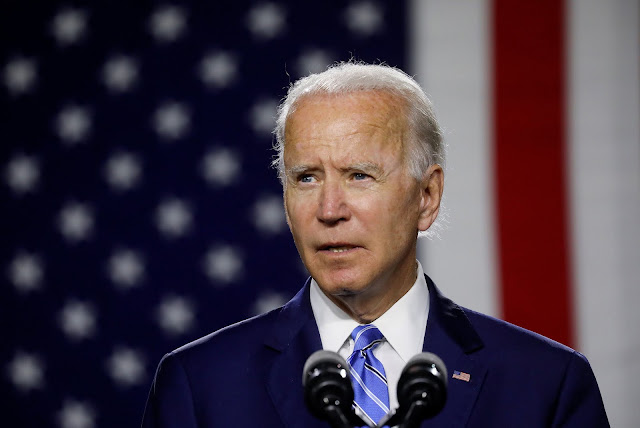 There can be no doubt: In a democracy, force should never seek to overrule the will of the people or attempt to erase the outcome of a credible election.

The Burmese military should relinquish power they have seized, release the advocates and activists and officials they have detained, lift the restrictions on telecommunications, and refrain from violence.

While Biden demands “democracy” for  Myanmar – he fails to admit that democracy by definition is a process of self-determination and Washington’s role in installing Aung San Suu Kyi and her NLD into power in the first place was as much a violation of Myanmar’s political independence and he claims the military’s recent move was.

The US government through the US National Endowment for Democracy (NED) funds over 80 programs alone in support of the now ousted government of Aung San Suu Kyi and her NLD. The US has created what is essentially a parallel structure of institutions it had – until the military took power – run the country with.

President Biden’s remarks about Yemen and his desire to end the war might – at first glance appear positive.

Yet upon closer examination, the prospect of peace is much less promising.

This war has to end.

And to underscore our commitment, we are ending all American support for offensive operations in the war in Yemen, including relevant arms sales.

Biden would quickly follow up his comment by noting attacks on Saudi Arabia – omitting the context that they are being carried out in retaliation for Saudi Arabia’s war of aggression on Yemen.

Thus, Biden is simply saying the US will not sell Saudi Arabia (directly) “relevant” weapons that will be used in the war on Yemen – but will surely continue selling Saudi Arabia weapons – a fact that will nonetheless continue to enable Saudi aggression both against Yemen and throughout the region – either directly or indirectly.

It should be remembered that Biden was vice president when this US-enabled proxy war began in the first place and for the sole purpose of installing a Western-friendly regime into power.

Regarding Yemen, Biden managed to vow continued war while appearing to seek peace.

Russia’s “Interfering with our Elections, Cyberattacks, Poisoning its Citizens” is “Over”

While Biden has extended New START with Russia – his comments about Russia signal the creation of the same sort of pretext all of his predecessors have used to then walk away from other essential arms control treaties.

I made it clear to President Putin, in a manner very different from my predecessor, that the days of the United States rolling over in the face of Russia’s aggressive actions — interfering with our elections, cyberattacks, poisoning its citizens — are over.  We will not hesitate to raise the cost on Russia and defend our vital interests and our people.

The US conducted an investigation for over 2 years regarding alleged “Russian interference” in US elections and found no such evidence.

The same can be said of alleged “Russian cyberattacks,” particularly when considering experts submitting reports to US Congress on the matter were then caught themselves posing as Russians and engaging in coordinated inauthentic behavior in America’s information space – and worst of all – during US elections.

The “poisoning” of Russian citizens regards the alleged poisoning of US-backed opposition figure Alexei Navalny – an extremely unpopular figure in Russian politicals with no prospect of ever holding political office. The alleged poisoning came at a time when Russia and Germany were nearly finished with the Nord Stream 2 pipeline. The “poisoned” Navalny was flown by a shadowy Western NGO to Germany to serve as a prop in last-minute efforts by the US to shame Germany into cancelling the project.

It is clear who had the motive to poison Navalny and it wasn’t the Kremlin.

Thus, Biden is repeating three accusations of which he has evidence for none – followed by a threat to “raise the cost on Russia” which will most certainly include the shredding of treaties, additional sanctions, and more hybrid warfare directed along Russia’s peripheries and within Russian borders themselves.

And while Biden poses as breaking away from alleged warm relations between “Trump’s” America and Russia – shredding treaties, imposing sanctions, and using hybrid warfare against Russia continued under all four years of Trump’s presidency.

Biden vowed to carry US hostility toward China, predicated on the same lies the Trump administration used to justify what has become a full-blown trade war between the US and China.

China’s “economic abuses” are simply China out-competing the US economically. “Aggressive, coercive action” most likely refers to China’s ability to leverage its growing power in defense against what was for decades unchecked Western abuses and aggression against both China directly and its neighbors.

And US claims regarding China’s “attack on human rights, intellectual property, and global governance” are three repetitive lies the US is using with more frequency against any and all nations that refuse to fall under its “intentional order.”  The notion of the US taking the moral high-ground on “human rights” despite being the worst offender of human rights this century – including Biden’s own personal role in the wars in Libya, Syria, and Yemen – plums new depths of American hypocrisy.

Biden would also at one point claim (emphasis added):

If we invest in ourselves and our people, if we fight to ensure that American businesses are positioned to compete and win on the global stage, if the rules of international trade aren’t stacked against us, if our workers and intellectual property are protected, then there’s no country on Earth — not China or any other country on Earth — that can match us.

Back in reality, China is a nation with four times the population of the US, with an economy increasingly dependent on cutting edge technology, and with access to plenty of resources. Unless US President Joe Biden is suggesting that the people of China are somehow inferior to Americans – China will not only “match” the US, it will inevitably surpass it several times over.

US President Joe Biden’s first foreign policy speech was a vow to maintain America’s belligerent posture around the globe. Biden all but vowed to continue ratcheting up pressure on both Russia and China – and for reasons we know for a fact are verified lies.

He all but stated that the war in Yemen will only end when the outcome the US seeks is finally achieved.

And in the end – ultimately – Biden is making a renewed declaration of American exceptionalism – stating that no nation can “match” the US as long as the “rules” aren’t “stacked against” America.

Of course – for a nation with a smaller population and access to fewer resources – the only way for that to be possible is if the rules are instead stacked against everyone else on Earth – and that is precisely what the Biden administration is promising the world over the next four years – the continued stacking of those rules against all other nations on Earth and punishment to anyone who attempts to stop America from doing so.