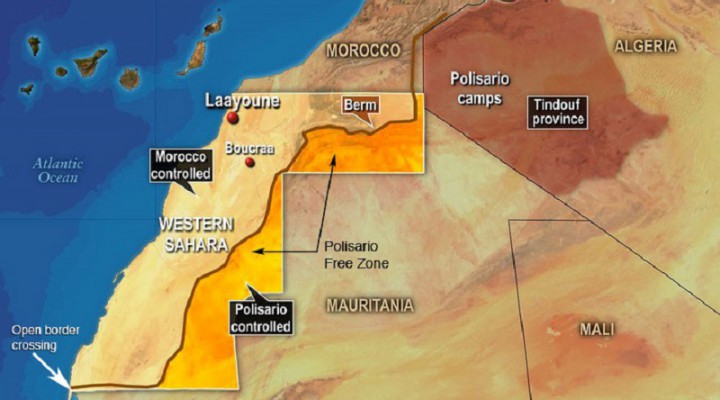 Most folks never heard about Western Sahara until Trump unilaterally recognized Morocco’s claims to this disputed region of the Maghreb last week in exchange for it agreeing to a peace deal with “Israel”, but it’s actually extremely important for the anti-imperialist cause since its standing is similar to Palestine and Kashmir’s in the eyes of international law.

Trump’s unilateral recognition of Morocco’s claims to the disputed Maghreb region of Western Sahara in exchange for Rabat formalizing its long-held and not-so-secret ties with Tel Aviv caught many observers by surprise who previously weren’t familiar with this unresolved conflict. Palestine and Kashmir are much more globally prominent because of the involvement of nuclear powers and the efforts of some to focus more on the inter-religious optics of these conflicts than their international legal origins. Western Sahara satisfies neither of those two “exciting” criteria, hence why it’s largely been forgotten about by most of the world since the issue first came to the fore of international politics in the mid-1970s.

Francoist Spain’s “decolonization” process saw the totalitarian country refuse to grant independence to the Western Sahara, instead dividing it between neighboring Morocco and Mauritania against the wishes of the indigenous Sahrawi people as represented by the Polisario Front. This group in turn proclaimed the Sahrawi Arab Democratic Republic with the support of neighboring Algeria, which has an historic rivalry with Morocco and was also sympathetic to socialist causes such as this one during the Old Cold War. Mauritania eventually abandoned its claims to the disputed region, and after over a decades’ worth of fighting, Morocco and the Western Sahara reached a UN-backed agreement in 1991 to hold a referendum on the region’s political status.

The vote never took place since the two warring sides couldn’t agree on who’s eligible to vote, with the primary problem being Morocco’s insistence on letting settlers participate. Western Sahara is also de-facto divided by a sand wall that the occupying army built to solidify its control over approximately 80% of the territory. With Trump’s unilateral recognition of Rabat’s claim to the entire region (which might eventually be followed by others such as “Israel”), as well as his government’s subsequent decision to move forward with a $1 billion arms deal, it’s extremely unlikely that last month’s end of the 29-year ceasefire will result in any serious gains being made by the Polisario Front.

Russia denounced the US’ political decision as illegal under international law, which is an entirely accurate assessment, but this isn’t expected to have any tangible effect on altering the conflict’s dynamics. Only Algeria could potentially have an impact, but its ongoing domestic political problems over nearly the past two years have forced it to suddenly look inward instead of continue with its traditional policy of presenting itself as a regional leader. Moreover, the US’ planned arms deal might ultimately shift the regional balance of power in a decisive way, especially if “Israel” gets involved too, or at the very least spark a new arms race between Morocco and Algeria as the latter looks to Russia and China for more military support in response.

Amidst all of this, anti-imperialists shouldn’t ever forget the international legal importance of the Western Saharan cause. However one feels about the legitimacy of either side’s claims in the conflict, it’s nevertheless a UNSC-recognized dispute that’s supposed to be resolved by a referendum. The precedent of the US unilaterally abandoning its international legal obligations is disturbing and arguably also destabilizing, though it’s obviously doing this in pursuit of its own national interests as it subjectively understands them. The problem, however, is that this might embolden other claimants over different UNSC-recognized disputed territories across the world to double down on their maximalist positions, thus making it much more difficult to resolve those issues.

Another important point is that international law exists not solely for “moral” reasons like its most passionate supporters claim (since it’s obviously imperfect), but for practical ones related to the necessity of having predictable means to resolve international disputes in order to avoid unintentional escalations that could quickly evolve into larger and more uncontrollable conflicts. Unilateral maximalist claims by one party are troublesome, but they become even worse when they’re supported by self-interested external actors who might also have an ulterior motive to divide and rule the region in question like the US clearly does in the Maghreb, Mideast, and South Asia regarding Western Sahara, Palestine, and Kashmir.

The Western Saharan cause is therefore inextricable from the Palestinian and Kashmiri ones in the eyes of international law, which is why supporters of those two should stand in solidarity with their Sahrawi counterparts. The issue can only legally be settled by a referendum according to the UNSC regardless of one’s personal views towards the conflict, but since that has yet to happen and might very well never occur after Trump’s combined diplomatic-military support for Morocco’s claims gives Rabat no incentive to comply, observers can’t help but be concerned. The only way to remain consistent with supporting Palestine and Kashmir is to support Western Sahara’s UNSC-recognized right to a referendum.