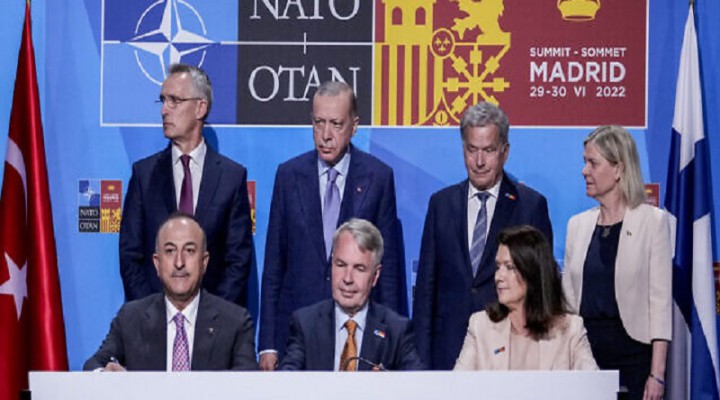 Some observers have sarcastically remarked on social media that Turkiye was “up to its old tricks again” and had “predictably backstabbed” Russia, though this is a twisted interpretation of reality that must urgently be clarified in order to avoid misleading any more people than it already has.

Turkiye agreed to a memorandum with Finland and Sweden on Tuesday for ensuring the first-mentioned’s national security interests regarding Kurdish groups that it considers to be terrorists in exchange for approving those two’s application to join NATO. The timing coincides with the NATO Summit in Madrid and will thus inevitably result in them becoming full members sooner than later. Some observers have sarcastically remarked on social media that Turkiye was “up to its old tricks again” and had “predictably backstabbed” Russia, though this is a twisted interpretation of reality that must urgently be clarified in order to avoid misleading any more people than it already has.

To begin with, Russian-Turkish relations are sometimes tense but have always overcome the obstacles in the path of their strategic partnership due to their leaders’ shared desire to responsibly regulate their rivalry. Ankara’s initial objection to Finland and Sweden’s NATO applications caught many off guard who hadn’t earlier expected such fierce resistance in defense of what it considers to be its national security red lines on this sensitive issue. It had absolutely nothing to do with Turkiye’s ties with Russia even though this spat served to indirectly advance Moscow’s soft power aims insofar as highlighting the divergent interests of that hostile alliance’s members contrary to claims from their officials.

Since it was never taken for granted – let alone expected – that this dispute would even emerge, there’s no reason for Russia or its supporters to be disappointed that it’s finally been resolved. This brings the analysis along the second point, which is that there are unfriendly third forces who constantly aim to manipulate popular perceptions in both countries for the purpose of dividing and ruling them to others’ benefit. They’re operating at full force in the 24 hours since news of the trilateral memorandum was released in order to manufacture the false narrative that Turkiye “backstabbed” Russia, which well-wishers of their strategic partnership must be fully aware of and prepared to actively counter.

The third point is that truly multipolar and sovereign countries like Turkiye always pursue what their leaders regard as their objective national interests even if these at times might conflict with others’, including partners like Russia’s, though the second observation doesn’t mean that whatever it may have been was motivated with that intention in mind. In this instance, Turkiye saw a priceless opportunity to politically resolve a long-standing national security issue with those two countries, which it immediately sought to do by playing hardball over their NATO applications.  This was a sensible and pragmatic move on that country’s part that fully aligns with its interests as its leadership understands them to be.

Moving along, the fourth point which proves that Turkiye didn’t “backstab” Russia is that even the latter’s former President and incumbent Deputy Secretary of the Security Council Medvedev reaffirmed earlier this month that “Sweden and Finland’s NATO membership – at least in the form that had been announced – presents a lesser threat for Russia than the admission of Ukraine.” He added just yesterday that “We have no territorial disputes with these countries currently and do not anticipate any, there are no reasons for them whatsoever. If they feel themselves better and safer by joining the alliance, let them do it.” That said, other officials confirmed force posture changes if Finland changes its own first.

The final point to make is that Russia and Turkiye objectively have different interests at times but have thus far always been able to work past them in order to continue their mutually beneficial cooperation due to their leaders’ shared desire to do so. There’s nothing connected with this latest development that seriously suggests that this trend will soon stop. Those who are predicting as much either aren’t aware of the fourth point above related to Russia already accepting that those two countries will join NATO or are being deliberately dishonest in order to mislead their audience. Precedent proves that this obstacle – if one can even call it that – in Russian-Turkish relations will also be overcome.

To bring it all together, there’s no credible reason to believe that Turkiye “backstabbed” Russia and thus predict that their ties will soon worsen as a result of Ankara reaching an agreement with Finland and Sweden over those two’s NATO membership bids. Even NATO Secretary General Stoltenberg was surprised by Turkiye’s fierce resistance to them joining until they comply with its national security demands so neither Russia nor its supporters should have even expected this latest spat, let alone that it would persist indefinitely or that it was being done as some favor to Moscow. The end result is that Russian-Turkish ties will continue strengthening whether the Alt-Media Community likes it or not.