HOME / WORLD / Turkey and the Taliban 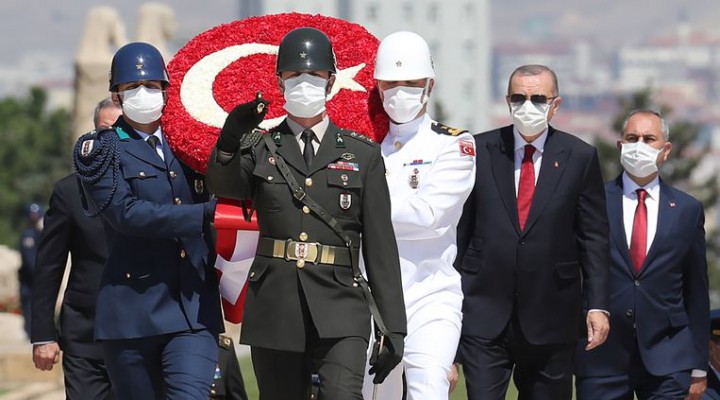 Turkish President Recep Tayyip Erdoğan’s bid to seal an agreement with the US that keeps Turkish troops in Afghanistan – under the guise of guarding and operating Kabul International Airport – after the withdrawal of all other NATO forces got a swift and firm response from the Taliban. They categorically rejected the move and warned of “grave consequences” if it went ahead.

As Defence Minister Hulusi Akar publicly outlined the plan, the Turkish president placed a call to his Israeli counterpart Isaac Herzog to congratulate him on his inauguration and assure him he wanted stronger ties with Israel. Erdoğan “emphasized that Turkey-Israel relations were of great importance for security and stability in the Middle East, stating that there was a high potential for cooperation between the two countries in various fields, particularly in energy, tourism and technology,” according to a Turkish government statement.

There are strong signs that further high-level steps to accelerate a rapprochement between the two sides will be taken in the next few weeks.

Details of the deal struck between Ankara and Washington remain vague. But it surely goes beyond securing and running the Afghan capital’s airport after remaining US forces depart. It is equally unclear what financial and political pay-back Turkey will get for taking on the role of chief military surrogate for the US in post-withdrawal Afghanistan – nor how that ties in with the impending Turkish-Israeli entente.

Turkey only has around 500 troops deployed in Afghanistan, under the NATO umbrella. It will need to reinforce them many times over and supply them with heavy weaponry, anti-missile defence systems, and drones if it is to secure the airport. The task will require a substantial force and formidable firepower once American air cover is withdrawn.

But this is about more than protecting the airport. The US pull-out from Afghanistan could trigger a civil war between rival ethnic, tribal and sectarian forces. Several international and regional players will meanwhile continue competing for influence in the country, including Pakistan, Iran, India and Russia in addition to the US. The latter will want to avenge its defeat by the Taliban and prevent them from re-establishing their Islamic Emirate. It may also use Afghanistan as a base for destabilizing China by sponsoring Uyghur and other militias operating out of the strip of Afghan territory adjoining Western China, on the pretext of protecting the ‘oppressed’ Muslim Uyghurs there.

One question being asked in all the capitals concerned is whether the Turkish government will send only its regular forces to Afghanistan to expand its influence there, or recruit Syrian and ethnic Turkic mercenaries to supplement them, as it did in Syria, Libya and Azerbaijan.

The Taliban have served notice that if the planned deployment goes ahead, Turkey will be treated as a hostile power. “If foreign forces want to retain a military presence here in the name of airport security, Afghans will not allow it and will view them as invaders, be it Turkey or any other country,” Taliban spokesman Zabihullah Mujahid warned. That means they will be subject to Taliban attacks.

The Taliban fought NATO for more than 20 years. They defeated the US and forced it to pull out after it committed 160,000 troops and trillions of dollars to the war, losing 3,500 dead and 25,000 injured soldiers . They will not find it harder to repel Turkish troops and any mercenaries they bring along than the combined forces of the US and NATO.

Even more significantly, the Taliban have been cultivating relations with China, Iran and Russia — all of whom the US has in its gunsights for the foreseeable future. They have renounced the Uyghur militias based in northeastern Afghanistan and promised not to allow them to operate against China. Taliban spokesman Suhail Shaheen said Afghanistan sees China as a friendly country and will not interfere in its internal affairs or undermine its security and stability.

He also noted that Muslim allies of the US such as Egypt, Saudi Arabia and Pakistan did not support the imposition of American and European sanctions on China over its supposed persecution of Uyghurs, and remarked: “so why should we?”

This reflects how the movement’s thinking has evolved and matured over the past 20 years. It has learned during its long struggle against American-led foreign occupation to become increasingly pragmatic.

The US may be quitting Afghanistan militarily, but not politically. It will continue waging proxy warfare – in which it has a long record and enormous expertise – against the Taliban and their allies. That could entail weaponising ‘political Islam’ yet again. In the 1980s, the US recruited hundreds of thousands of ‘mujahideen’ to expel the Soviet Union from the country and avenge its defeat in Vietnam. It used the same weapon later in Syria, Iraq and elsewhere. It may well now do so a second or third time in Afghanistan.

Erdogan, with his popularity plummeting, wants to hold on to power whatever the cost. He thinks the US and Israel can save both him and the crisis-hit Turkish economy.

This is a delusion. Afghanistan is not like Syria and Libya. It is hundreds of kilometres away from Turkey’s borders. The Pashtun, who form 45% of the population and the Taliban’s main power-base, adhere to an intense nationalism bolstered by an even more intense Islamic religious belief. Like the Yemenis, they have defeated every empire that has ever dared invade their country: first the British empire (twice), then the Soviet, and now the American one.

In brief: Erdogan is taking his country into a hornets’ nest. He can only ever emerge from it covered all over in stings.

0 thoughts on “Turkey and the Taliban”