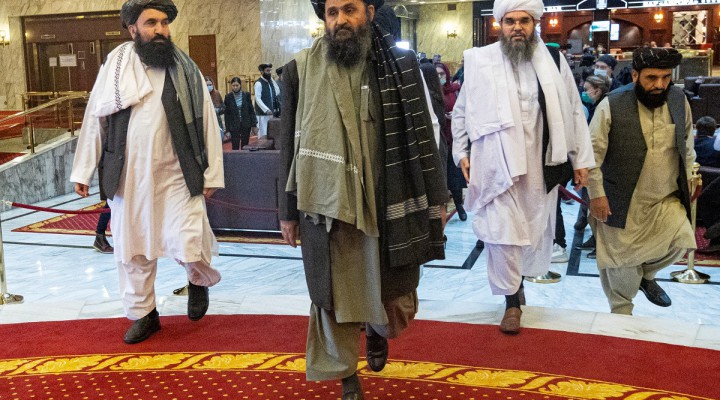 Deploying diplomatic skills refined from Doha to Moscow, the Taliban in 2021 has little to do with its 2001 incarnation

There were no substantial leaks. A bland statement pointed to the obvious: They “focused on the security situation in Afghanistan during the pullout of Western military contingencies and the escalation of the military-political situation in the northern part of the country.”

The real story is way more nuanced. Mohib, representing embattled President Ashraf Ghani, did his best to convince Patrushev that the Kabul administration represents stability. It does not – as the subsequent Taliban advances proved.

Patrushev knew Moscow could not offer any substantial measure of support to the current Kabul arrangement because doing so would burn bridges the Russians would need to cross in the process of engaging the Taliban. Patrushev knows that the continuation of Team Ghani is absolutely unacceptable to the Taliban – whatever the configuration of any future power-sharing agreement.

So Patrushev, according to diplomatic sources, definitely was not impressed.

This week we can all see why. A delegation from the Taliban political office went to Moscow essentially to discuss with the Russians the fast-evolving mini-chessboard in northern Afghanistan. The Taliban had been to Moscow four months earlier, along with the extended troika (Russia, US, China, Pakistan) to debate the new Afghan power equation.

On this trip, they emphatically assured their interlocutors there’s no Taliban interest in invading any territory of their Central Asia neighbors.

It’s not excessive, in view of how cleverly they’ve been playing their hand, to call the Taliban desert foxes. They know well what Foreign Minister Sergey Lavrov has been repeating: Any turbulence coming from Afghanistan will be met with a direct response from the Collective Security Treaty Organization.

In addition to stressing that the US withdrawal – actually, repositioning – represents the failure of its Afghan “mission,” Lavrov touched on the two really key points:

And then, relieving the tension, when asked by a Russian journalist if Moscow will send troops to Afghanistan, Lavrov reverted to Mr Cool: “The answer is obvious.”

Mohammad Suhail Shaheen is the quite articulate spokesman for the Taliban political office. He’s adamant that “taking Afghanistan by military force is not our policy. Our policy is to find a political solution to the Afghan issue, which is continuing in Doha.” Bottom line: “We confirmed our commitment to a political solution here in Moscow once more.”

That’s absolutely correct. The Taliban don’t want a bloodbath. They want to be embraced. As Shaheen has stressed, it would be easy to conquer major cities – but there would be blood. Meanwhile, the Taliban already control virtually the whole border with Tajikistan.

The 2021 Taliban have little in common with their 2001 pre-war on terror incarnation. The movement has evolved from a largely Ghilzai Pashtun rural guerrilla insurgency to a more inter-ethnic arrangement, incorporating Tajiks, Uzbeks and even Shi’ite Hazaras – a group that was mercilessly persecuted during the 1996-2001 years of Taliban power.

Reliable figures are extremely hard to come by, but 30% of the Taliban today may be non-Pashtuns. One of the top commanders is ethnically Tajik – and that explains the lightning-flash “soft” blitzkrieg in northern Afghanistan across Tajik territory.

I visited a lot of these geologically spectacular places in the early 2000s. The inhabitants, all cousins, speaking Dari, are now turning over their villages and towns to Tajik Taliban as a matter of trust. Very few – if any – Pashtuns from Kandahar or Jalalabad are involved. That illustrates the absolute failure of the central government in Kabul.

Those who do not join the Taliban simply desert – as did the Kabul forces manning the checkpoint close to the bridge over the Pyanj river, off the Pamir highway; they escaped without a fight to Tajik territory, actually riding the Pamir highway. The Taliban hoisted their flag in this crucial intersection without firing a shot.

The Afghan National Army’s chief, General Wali Mohammad Ahmadza, fresh into his role by appointment from Ghani, is keeping a brave face: ANA’s priority is to protect the main cities (so far, so good, because the Taliban are not attacking them); border crossings (that’s not going so well), and highways (mixed results so far).

This interview with Suhail Shaheen is quite enlightening – as he feels compelled to stress that “we don’t have access to media” and laments the “baseless” barrage of “propaganda launched against us,” which implies that Western media should admit the Taliban have changed.

Shaheen points out that “it’s not possible to take 150 districts in just six weeks by fighting,” which connects to the fact that the security forces “do not trust the Kabul administration.” In all districts that have been conquered, he swears, “ the forces came to the Taliban voluntarily.”

Shaheen makes a statement that could have come straight from Ronald Reagan in the mid-1980s: The “Islamic Emirate of Afghanistan are the real freedom fighters.” That may be the object of endless debate across the lands of Islam.

But one fact is indisputable: The Taliban are sticking by the agreement they signed with the Americans on February 29, 2020. And that implies a total American exit: “If they don’t abide by their commitments, we have a clear right of retaliation.”

Thinking ahead to “when an Islamic government is in place,” Shaheen insists there will be “good relations” with every nation, and embassies and consulates will not be targeted.

The Taliban “goal is clear: to end the occupation.” And that brings us to the tricky gambit of Turkish troops “protecting” Kabul airport. Shaheen is crystal clear. “No NATO forces – that means continuation of occupation,” he proclaims. “When we have an independent Islamic country, then we will sign any agreement with Turkey that is mutually beneficial.”

Shaheen is involved in the ongoing, very complicated negotiations in Doha, so he cannot allow himself to commit the Taliban to any future power-sharing agreement. What he does say, even though “progress is slow” in Doha, is that, contrary to what was previously reported by media in Qatar, the Taliban will not present a formal written proposal to Kabul by the end of the month,  The talks will continue.

Whatever the “Mission Accomplished” non-denial denials emanating from the White House, a few things are already clear on the Eurasia front.

The Russians, for one thing, are already engaging the Taliban, in detail, and may soon strike their name off their terror list.

The Chinese, for another, are assured that if the Taliban commit Afghanistan to join the Belt and Road Initiative, connecting via the China-Pakistan Economic Corridor, ISIS-Khorasan will not then be permitted to go on overdrive in Afghanistan bolstered by Uyghur jihadis currently in Idlib.

And nothing is off the table for Washington when it comes to derailing BRI. Crucial silos scattered across the deep state must be already at work replacing a forever war in Afghanistan with hybrid war, Syria-style.

Lavrov is very much aware of Kabul power brokers who would not say “no” to a new hybrid war arrangement. But the Taliban for their part have been very effective – preventing assorted Afghan factions from supporting Team Ghani.

As for the Central Asian “stans,” not a single one of them wants any forever wars or hybrid wars down the road.

Fasten your seat belts: It’s gonna be a bumpy ride.

0 thoughts on “Say hello to the diplo-Taliban”