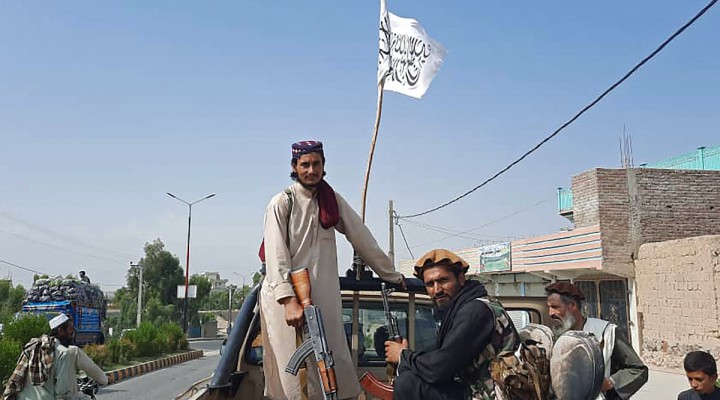 Beijing, Moscow are working overtime to scrub the Taliban’s ‘terrorist’ label and endorse it as a legitimate political movement

The first Taliban press conference after last weekend’s Saigon moment geopolitical earthquake, conducted by spokesman Zabihullah Mujahid, was in itself a game-changer.

The contrast could not be starker with those rambling pressers at the Taliban embassy in Islamabad after 9/11 and before the start of the American bombing – proving this incarnation of the Taliban is an entirely new political animal.

Yet some things never change. English translations remain atrocious. Here is a good summary of the key Taliban statements. These are the key takeaways:

– No problem for women to get an education all the way to college and to continue to work. They just need to wear the hijab, like in Qatar or Iran. No need to wear a burqa. The Taliban insist “all women’s rights will be guaranteed within the limits of Islamic law.”

– The Islamic Emirate “does not threaten anyone” and will not treat anyone as enemies. Crucially, revenge – an essential plank of the Pashtunwali code – will be abandoned, and that’s unprecedented. There will be a general amnesty, including people who worked for the former NATO-aligned system. Translators, for instance, won’t be harassed and don’t need to leave the country.

– The security of foreign embassies and international organizations “is a priority.” Taliban special security forces will protect both those leaving Afghanistan and those who remain.

– A strong inclusive Islamic government will be formed. “Inclusive” is code for the participation of women and Shiites.

– Foreign media will continue to work undisturbed. The Taliban government will allow public criticism and debate. But “freedom of speech in Afghanistan must be in line with Islamic values.”

– The Islamic Emirate of Taliban wants recognition from the “international community” – code for NATO. The overwhelming majority of Eurasia and the Global South will recognize it anyway.

It’s essential to note, for example, the closer integration of the expanding Shanghai Cooperation Organization (SCO) – Iran is about to become a full member, Afghanistan is an observer – with the Association of Southeast Asian Nations (ASEAN).

The absolute majority of Asia will not shun the Taliban.

For the record, the Taliban also stated that it took all of Afghanistan in only 11 days: that’s pretty accurate. They stressed “very good relations with Pakistan, Russia and China.”

Yet the Taliban don’t have formal allies and are not part of any military-political bloc. They definitely “won’t allow Afghanistan to become a safe haven for international terrorists.” That’s code for ISIS/Daesh.

On the key issue of opium and heroin, the Taliban say they will ban its production.

As eyebrow-raising as these statements may be, the Taliban did not even get into detail on economic and infrastructure development deals – as they will need a lot of new industries, new jobs and improved Eurasian-wide trade relations. That will likely be announced later.

What this first press conference reveals is how the Taliban are fast-absorbing essential PR and media lessons from Moscow and Beijing, emphasizing ethnic harmony, the role of women, the role of diplomacy and deftly defusing in a single move all the hysteria raging across NATOstan.

The next bombshell step in the PR wars will be to cut off the lethal, evidence-free Taliban-9/11 connection; thereafter the “terrorist organization” label will disappear and the Taliban as a political movement will be fully legitimized.

Moscow and Beijing are meticulously stage-managing the Taliban’s reinsertion in regional and global geopolitics. This means that the SCO is stage-managing the whole process: Russia and China are applying consensual decisions that have been taken in SCO meetings.

The key player the Taliban are talking to is Zamir Kabulov, Russia’s special presidential envoy for Afghanistan. In yet another debunking of the NATOstan narrative, Kabulov confirmed, for instance, “we see no direct threat to our allies in Central Asia. There are no facts proving otherwise.”

The Beltway will be stunned to learn that Zabulov has also revealed: “we have long been in talks with the Taliban on the prospects for development after their capture of power and they have repeatedly confirmed that they have no extraterritorial ambition, they learned the lessons of 2000.”

Zabulov reveals plenty of nuggets when it comes to Taliban diplomacy: “If we compare the negotiability of colleagues and partners, the Taliban have long seemed to me much more negotiable than the puppet Kabul government. We proceed from the premise that the agreements must be implemented. So far, with regard to the security of the embassy and the security of our allies in Central Asia, the Taliban have respected the agreements.”

These contacts were established “over the past seven years.”

Faithful to its adherence to international law, and not the “rules-based international order,” Moscow is always keen to emphasize the responsibility of the UN Security Council: “We must make sure that the new government is ready to behave conditionally, as we say, in a civilized manner. That’s when this point of view becomes common to all, then the procedure [of removing the qualification of the Taliban as a terrorist organization] will begin.”

So while the US/EU/NATO flee Kabul in spasms of self-inflicted panic, Moscow is practicing diplomacy. Zabulov adds: “That we have prepared the ground for a conversation with the new government in Afghanistan in advance is an asset of Russian foreign policy.”

Meanwhile, Dmitry Zhirnov, Russia’s ambassador to Afghanistan, is working overtime with the Taliban including a meeting with a senior Taliban security official on Tuesday. The meeting was “positive, constructive … The Taliban movement has the most friendly; the best policy towards Russia … He arrived alone in one vehicle, with no guards.”

Both Moscow and Beijing have no illusions that the West is already deploying hybrid war tactics to discredit and destabilize a government that isn’t even formed yet and hasn’t even started working. No wonder Chinese media is describing Washington as a “strategic rogue.”

What matters is that Russia and China are way ahead of the curve, cultivating parallel inside tracks of diplomatic dialogue with the Taliban. It’s crucial to remember that Russia harbors 20 million Muslims and China at least 35 million. These will be called to support the immense project of Afghan reconstruction and full Eurasia reintegration.

0 thoughts on “China, Russia are stage-managing the Taliban”