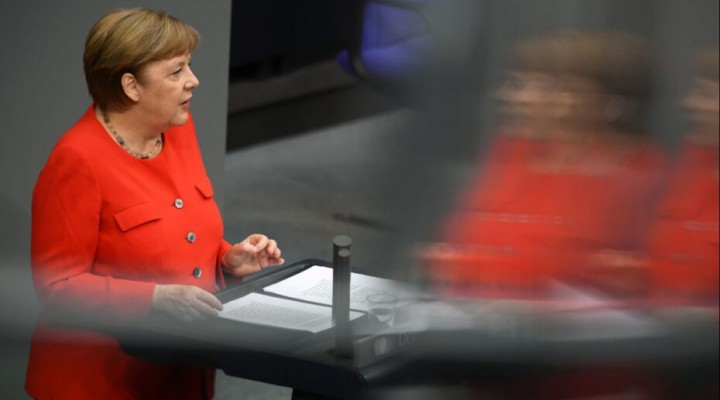 It is Europe’s political fabric and societal cohesion that is in play – and its leaders are not just confused: They fear.

All eyes remain on the U.S. election, and on fathoming its consequences. But in the shadow of ‘The Election’, there are other ‘moving parts’: Germany just offered Washington ‘a sweetheart deal’ in which, Europe – with Germany leading – accepts to leverage America’s full-spectrum strategy of isolating and weakening Russia and China. And in return it is asking the U.S. to acquiesce to German leadership of a ‘power-political’, European entity that is raised to parity with the U.S. That, bluntly, is to say, Germany is angling for ‘superpower’ status, atop an EU ‘empire’ for the new era. Putin recognised such a possibility (Germany aspiring to be a superpower) during his recent speech to Valdai.

But the other ‘moving parts’ to this bid are very much in motion, too: Firstly, Germany’s ploy is contingent on their hopes for a Biden win, which may, or may not, occur. And then, too, President Macron seeks for himself, and for France, the leadership of Europe – with this latter – to an extent – being contingent on a ‘no deal’ Brexit taking place at the end of the year, that would further weaken a dis-animated and fading Merkel. France rather, plots the ‘Great Reset’ of Europe: A regulatory and values enforced ‘space’, underpinned by a common fiscal and debt regime that would rebuild France’s economic infrastructure.

All this raises many questions: Should Trump win, he can be expected to puncture any German (or French) aspiration to drain away some of America’s power, however nicely the German FM wraps it, as the U.S. not so much losing power, but as gaining “a strong partner on equal terms”. Huh!

The idea that Europe can leverage this partnership through sweet-talking Germany’s commitment “to the West as a system of values”, which is “at risk in its entirety”, and which, only Germany and the U.S. together can keep strong – does seem a bit of a daydream. Even when sugar-wrapped with “defending against the unmistakable Russian thirst for power, and Chinese ambitions for global supremacy”. Firstly, there is still Trump, and secondly —

China and Russia clearly see the game. Yet European leaders seem to expect that the former will continue as if nothing is awry. Annegret Kramp-Karrenbauer seems to think so (she is both Defence Minister, and Chair of the CDU, Merkel’s own party). In terms of containing “China’s aggressively controlled state capitalism”, she suggests creating a European trade sphere that is open only to those who want to strengthen and support the liberal, rules-based order – and to which other states must ‘submit’ (Macron’s words). These are the bones to how Brussels proposes to achieve ‘strategic autonomy’ (Charles Michel’s term).

Here are some extracts of Annegret Kramp-Karrenbauer’s ‘deal’ given in a 23 October speech:

“… Most of all, America has given us what we call ‘Westbindung’ … Westbindung, to me, is and remains, a clear rejection of the historic temptation of equidistance. Westbindung anchors us firmly in NATO and the EU and ties us closely to Washington, Brussels, Paris and London. It clearly and rightly positions us against a romantic fixation on Russia – and also against an illiberal corporative state that rejects parties and parliaments [i.e. China] … Westbindung is the answer to the famous “German question”, the question of what Germany stands for … Only America and Europe together can keep the West strong, defending it against the unmistakable Russian thirst for power and Chinese ambitions for global supremacy … To be the giver [in a process of ‘give and take with the U.S.] would require us to take a firm power-political stance. To ambitiously play the geopolitical game. But even looking at all this, there are still some Americans who are not convinced that they need NATO. I understand that. Because there is one thing still missing: That is for the Europeans to take powerful action themselves, when push comes to shove. So that the United States can see Europe as a strong partner on equal terms, not as a damsel in distress. As you can see: the German dilemma is a European dilemma as well. We stay dependent [on the U.S.], but at the same time, we must come into our own. In strengthening Europe like this, Germany must play a key role … enabling it to operate more independently of, and more closely with, the United States at the same time …”.

Three major geo-political issues here are intersecting: Firstly, Germany is metamorphosing politically, in a way that holds disturbing parallels with its transition in the pre-WW1, European setting. In short, the ‘German Question’ is surfacing again (but not in AKK’s way): When the Berlin Wall fell, Russia supported the reunification of Germany and pinned hopes on Germany being a partner for the wider unification project: the construction of a ‘Greater Europe’.

It proved to be a chimaera: Germany, far from supporting Russia’s inclusion, instead, favoured the expansion of Europe and NATO to Russia’s borders. The EU – under U.S. pressure – was forming a Greater Europe that would eventually include all the states of Europe, except Russia.

But in so doing, West Europe absorbed into the EU the tumour of East European neuralgia on Russia. Berlin, all the while, has played on America’s visceral hostility towards Russia – more as a tool to build out its European space up to the Russian border. Germany thus has prioritised assuaging Eastern European ancient antipathies, above any real attempt at a relationship with Russia. Now Germany wants to ‘play it again’: In a July interview, Annegret Kramp-Karrenbauer said that the Russian leadership must be “confronted with a clear position: We are well-fortified, and in case of doubt, ready to defend ourselves. We see what Russia is doing, and we will not let the Russian leadership get away with it”.

Well: Fool me once … but fool me twice …? The Navalny episode was the last straw. It was a blatant lie. Merkel and Macron knew it to be a lie. And they knew that Moscow knew it, too. Yet they both preferred to toss the Russophobes another ‘bone’. Moscow gave up with them.

The real puzzle is why Moscow put up with this play for so long. The answer perhaps, lies with the Russian two-headed eagle, whose heads face in opposite directions: one toward Europe, and the other toward Asia. Merkel’s obvious deceit is stretching and testing social trust in Russia, just too far. The Russian élites may lean towards Europe, but their base looks East. Navalny was the humiliating straw that broke the camel’s back

Now Macron – still energised, but himself politically weakened – hopes to drain further Merkel’s strength (in mercantilist terms), through engineering a UK no-deal Brexit that would damage Germany’s huge trade surplus with Britain, at the very moment that Germany is losing markets in Russia (and now possibly in China); and when America, if Trump is re-elected, would likely embark on a trade war with Europe.

Weakening Merkel’s hand – that is – in opposing an European joint debt instrument, together with a common fiscal policies, is the aim, so that France might draw down on German fiscal resources placed within a ‘common pot’, and then deployed to revamp the French economy.

The Brussels plan for a ‘Great Reset’ – transforming the European economy, and the social sphere – through automation and technology is, as Tom Luongo has noted delusional: “[W]hat’s been pretty clear to me is Europe’s delusions that it can subjugate the world under its rubric, forcing its rules and standards on the rest of us, including China, [whilst] again allowing the U.S. to act as its proxy – [as Europe] tries to maintain its [‘power-political’] standing is delusional”.

‘Delusional’, as although China may be an “aggressively controlled state capitalism” in Euro-speak, it is also a major ‘civilisational state’, with its own distinct values. Brussels may call their regulatory space ‘open’, but it is clearly exclusionary, and not multilateral. The action of this politics is only pushing the world towards a separation of distinct regulatory spheres – and toward deeper recession.

On the practical plane, whereas first phase Covid tended to provide support to Europe’s incumbent governments, this present infection spike is shredding support for incumbents. Protests and riots are increasingly taking place across Europe. Episodes of violence have been met with horror by the authorities, which suspect that organized crime and radical groups are at work to spark a political wildfire. And that potential is very much there.

To the structural unemployment already incurred in phase one, now must be added another wave of possibly irreversible unemployment, (again) in the services sector. For small businesses and the self-employed, it is a nightmare. Not surprisingly, the anger grows as those losing their means of living observe that civil servants and the middle classes more generally, are passing through this episode, virtually unscathed.

European governments have been caught off-guard. There is absolute confusion as governments try to square keeping the economy alive, with containing the infected from overwhelming hospitals – achieving neither. This represents the cost of the ‘summer opening’ to save the tourist season. No one is on their balcony these evenings banging cooking pots in communal solidarity. Today, protests and riots have taken their place.

Into this mounting anger is inserted dark suspicion. Some may view Covid as pure conspiracy; others will not. Yet it is not ‘conspiracy’ to believe that European governments may knowingly have used the pandemic to increase their tools of social control, (despite ‘distancing’ being a genuine medical containment strategy). Was this concerted in anticipation of the changes implicit to the ‘Great Reset’? We do not know. Yet, from the outset, western governments couched their measures as ‘war’ – and as war that required war-time state-directed economics, and war-time public compliance.

Rightly or wrongly, it is becoming a culture war. Overtones of the anger on U.S. streets. Again, dark suspicions that cultural life is being closed down in order to prepare Europeans for the drowning of their cultural identities into a big Brussels-made, melting-pot. These fears may be misplaced, but they are ‘out there’, and viral.

It is Europe’s political fabric and societal cohesion that is in play – and its leaders are not just confused: They fear.

It would indeed be hubristic delusion then, were European leaders to proceed with the automation ‘Great Reset’, and add yet more structural unemployment to a pile, already threatening to topple, under its growing weight (into mass protest). Do they want revolution?

0 thoughts on “Why Is Europe Courting Revolution?”