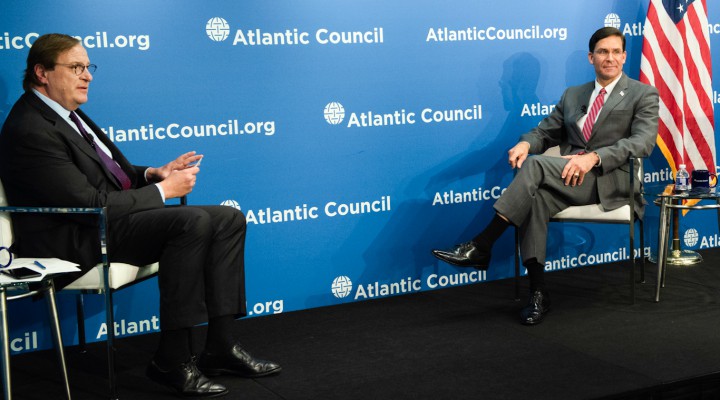 US Defense Secretary Mark Esper visited the notorious Atlantic Council, funded by a who’s who of weapons makers and despotic regimes, to announce that the US would not, indeed, be withdrawing troops from Germany but sending them to Russia’s border instead.

MPN– The United States was supposed to be sending thousands of troops home from Germany. But Secretary of Defense Mark Esper announced yesterday that they would instead be redeployed eastwards, right on the Russian border in some cases, supposedly to deter “growing Russian and Chinese threats.”

“It’s common sense,” the senior Trump administration official said. “You don’t need to be Napoleon or MacArthur to look at the map and realize that the further east you are, the more reassurance you could provide for those allies and partners on the frontlines—whether it’s in the northeast, it’s the Baltic states, Poland, just due east of Germany, or in Bulgaria and Romania in the southeast along the Black Sea.” Thus, for the U.S. government, the “frontline” against an “aggressive” Russia includes countries that until recently were a part of the Soviet Union and that sit directly on Russia’s border. In July, Trump announced the impending withdrawal of thousands of U.S. armed forces from Germany (a country it has militarily occupied since World War Two).

Esper was speaking at the Atlantic Council, an influential think tank started as a NATO cutout organization funded by Western governments, Middle Eastern dictatorships, weapons companies like Raytheon, Northrop Grumman, and Boeing, as well many of the world’s largest corporations such as Goldman Sachs, BP, and FedEx.

The administration’s plan to ramp down the U.S. military presence from 36,000 troops to 24,000 was met with overwhelming hostility in Washington when it was first announced in July; the Democrat-controlled House of Representatives even included an amendment to its version of the 2021 National Defense Authorization Act to block funding for any withdrawal. Both Republican Sen. Mitt Romney and CNN described the idea as Trump’s “gift to Russia,” while Democratic Sen. Bob Menendez claimed that “champagne must be flowing freely this evening at the Kremlin.” Thus, the news of a change of course will likely be greeted warmly in “resistance” circles.

Even during a worldwide pandemic that has destroyed the economy, the U.S. government is strong-arming its allies, NATO and non-NATO alike, into rearming for a potential global war against both Russia and China. Esper presented the United States as a protector nation, unfairly having to pay for the defense of other countries. “To overcome the increasingly complex threats in the 21st century and defend our shared values, there can be no free riders to our common security,” he said, adding that it was imperative that other states “share the burden” and increase their military spending to at least two percent of their gross domestic product “as the floor.” “We also expect them to be ready, capable, and willing to deploy when trouble calls. And we expect them to stand shoulder to shoulder with the United States in confronting Chinese bad behavior and Russian aggression,” he added.

What is this Chinese and Russian aggression? Esper noted an increased Chinese military presence in the South China Sea, where throughout the summer, the U.S. has also been expanding its footprint. U.S. warships have been patrolling as close as 41 nautical miles from the Chinese coast. He pointed to the Russian presence in Ukraine (a country the U.S. is also flooding with weapons) as justification for the “defensive” action of sending thousands of troops mere miles from Russia itself.

Esper also called for a wholescale “modernization” of the military and the arms industry, which, he claimed, had too many restrictions on it regarding foreign sales, meaning the West’s “asymmetric advantage” was at risk. But, as many have explored previously, “modernization” is a favorite political euphemism used when wanting to discuss or promote a new arms race.

Who is the Atlantic Council?

The Atlantic Council is an increasingly influential body whose board of directors is a who’s who of American state power. From war planners like Henry Kissinger to Bush administration officials like Condoleezza Rice and Colin Powell, army generals like David Petraeus and Wesley Clark, and former CIA directors such as Leon Panetta, Michael Chertoff, and Robert Gates, the organization is as close to a representation of the so-called “deep state” as is possible to get.

The Council has also been the driving force behind many of the most hawkish RussiaGate stories in recent years, putting out a series of widely cited reports claiming that virtually every political party in Europe not representing the established political center is secretly controlled by Vladimir Putin. From Labour and UKIP in Britain, Syriza and Golden Dawn in Greece to the Five Star Movement in Italy, all, according to Atlantic Council reports, are the “Kremlin’s Trojan Horses.” These reports have provided the basis for much of the most breathless stories regarding Russia since 2016.

The Council is also in charge of curating Facebook’s news feed, deciding which sources are high quality and newsworthy, and which sources are fake news, and are taken down from the site. Since around 40 percent of Americans (and similar numbers across the globe) get their news from Facebook, the partnership with an organization like the Atlantic Council is as close to worldwide state media censorship as is likely to be achieved in the modern era. Yet few even know about this connection at all, nor how much of an influence the group has over modern media.

Throughout 2020, President Trump has used China as a method of deflecting attention away from his own response to the coronavirus pandemic, which, as of October 21, has claimed the lives of over 226,000 Americans. Trump has constantly condemned China for its response and labeled COVID-19 as the “Wuhan China Virus” or similar.

Democrats have largely decided to attack Trump on the right on the issue, however, with both parties claiming the other’s leader is in the pocket of Beijing. As a result, the public’s view of China has reached a new low, with only 22 percent of Americans expressing a positive view of the world’s most populous state, and 73 percent holding a negative opinion.

Polls are currently not looking good for Trump. Yet Joe Biden’s campaign team has strongly hinted at increased conflict with both Russia and China if their candidate is to win in November, suggesting that, when it comes to foreign policy, war is a bipartisan issue.