HOME / WORLD / Watching the Tree to Catch a Hare 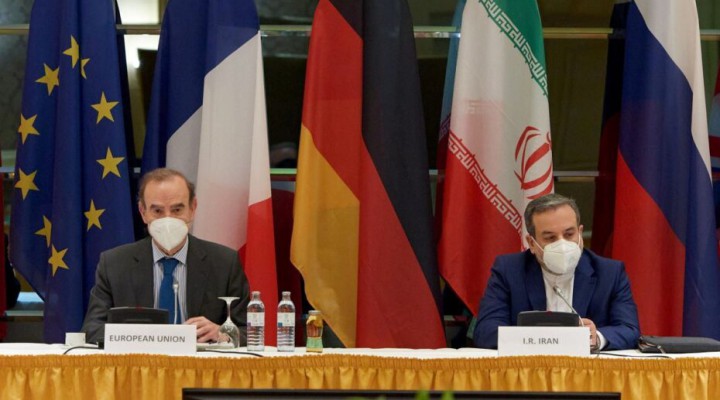 This American lacuna is not confined to Iran. The world has changed decisively, yet America seems to be pursuing its policies of yesteryear.

Two writers who explicitly present themselves as prominent advocates of the pro-Israel ‘Community’ in Washington, Tony Badran and Michael Doran, in a piece in The Tablet, condemn the Team Biden’s attempt to achieve a return to the JCPOA as a feint devised to undermine Israel’s ‘war between wars’ with Iran, and as a political Trojan Horse.

They warn that: “A consensus reigns inside the administration, not just on the JCPOA, but on every big question of Middle East strategy: Everyone from the president on down, agrees about the need ‘to complete what Obama started’ — which means that the worst is yet to come”: A hint that (for the ‘Community’), the end result effectively means the de-fanging of Israel, achieved by laying down a smoke cloud of ‘love’ for Israel, washed down with more of the latest U.S. weaponry.

“If the control that Obama’s project exercises over every mind in the Biden administration is not already obvious – It is because confusion still reigns about the true nature of the [Obama] project” … That nature, and “ultimate goal,” Malley has written, was “to help the [Middle East] find a more stable balance of power that would make it less dependent on direct U.S. interference or protection”. (Emphasis added.)

Malley’s description is a roundabout way, Badran and Doran argue, of saying that “Obama dreamed of a new Middle Eastern order—one that relies more on partnership with Iran”. Indeed, Jake Sullivan, a year ago seemly confirmed this analysis when he wrote: “The goal [in the Middle East] is to be “less ambitious” militarily, “but more ambitious in … [pressing] for a de-escalation in tensions and eventually a new modus vivendi [arriving] among the key regional actors … changing the U.S. role in a regional order – that it helped create”.

Obama’s ambition, the authors assert, was to work in partnership with Russia and Iran to stabilize not just Syria, but other regional trouble spots, too. After all, a tacit U.S. arrangement with Iran already had existed in Iraq, based on mutual hostility to Sunni jihadism. Couldn’t that model be expanded? Would not a partnership with Russia and Iran stabilize this vexed region?

The allegation of deceit – the evident ire – that this raised in the FDD and the pro-Israel ‘Community’, lay in the implicit corollary of Obama needing to hobble the “correlation of forces” – principally Israel and Saudi Arabia – that he, Obama, believed was boxing him in, preventing him “from towing Iran’s nuclear program out of the main lanes of U.S.-Iranian relations, and ‘parking it’ off to one side” – this being the necessary and sufficient condition for building a more stable balance of power, that would make the region less dependent on the U.S.

Ok, the ‘Community’ saw this as sinister; but equally, it could be argued that Obama was trying, also, to right the mis-match between U.S. resources and ballooning U.S. global commitments. What irks the authors so, however, is their belief that Obama’s policy is today’s Biden policy in its entirety. And that its ultimate aim is to drive a stake through the Iran containment policy which Trump and Netanyahu have pursued (with considerable success, according to the authors).

Here is the point: The authors almost certainly are correct when they argue that domestic U.S. politics explains “the hold that this empty theory exercises – over otherwise bright minds”. Realignment in the Middle East was the signature initiative of Barack Obama, who remains either the most powerful man in Democratic politics, or a very close second, and that “Malley, as the keeper of Obama’s Iran flame, reports to Blinken, in effect, through Obama”.

More pertinently, “the political heft of the Realignment derives not just from Obama’s personal support; but also from the support of progressives whose cosmology it affirms. The latter equate a policy of containing Iran with a path to ‘forever war’ – and transforms a policy of accommodating Iran into the path to peace”.

“It reduces the complexities of the Middle East to a Manichean morality tale that pits the progressives against their mythological foes—Evangelical Christians, “neoconservatives,” and Zionists. The Realignment depicts these foes as co-conspirators with Mohammed bin Salman and Benjamin Netanyahu, plotting to keep America mired in the Middle East”.

What is the point here? The Tablet piece is important, for it explains in a nutshell, a puzzling conundrum: Why is it that the DC Beltway has been so convinced that inevitably there would be a deal reached in Vienna on Iran’s return to the JCPOA? Trump was ousted, and with a huge sigh of relief, the world is able to revert to how matters stood four years earlier, and how could Iran possibly demur at Biden undoing for them, the fetters of containment? That would not be rational.

The Biden team probably did not even think to look at their JCPOA initiative from an Iranian current perspective. But perhaps Iran sees itself, through its own initiative, already having broken those fetters – through its outreach to China and Russia; through its embedding of an effective, swarm smart missile deterrence right across the region; and by the serendipitous unrolling of China’s new hard and digital economics all around and through Iran’s geography.

Team Biden however prevaricated initially, more intent on arguing about how to keep as much ‘leverage’ in situ as possible, over Iran (for their anticipated Part Two expanded JCPOA deal). They allowed whatever psychological impact there was to their project, to waste away. It became clear that a current in DC was more intent on being niggardly over the concessions on offer. And Iranian duly scepticism surged.

The salience to The Tablet article lies with its compelling argument that U.S. Iran politics was entirely focussed on a U.S. domestic wrangle; (Israel being integral to U.S. domestic politics.) All was an exercise in navel-gazing: Trump’s max-pressure had failed – and would be unceremoniously discarded. The Obama vision ‘was back’, thus allowing America to pivot away from West Asia towards its top priority of knocking-back China’s rise. How could Iran possibly refuse the renewal of the ‘Obama design’? Were the Iranians blind to the profound shift taking place in Washington politics as a result of 3 November?

No, Iran saw it, but events had moved on since Obama was in office. Iranians widely were doubtful. Why put themselves back into a regime of surveillance and intrusion, when their experience of it, even before May 2018, was pretty noxious?

A key point here – with the ‘Biden’ JCPOA approach, and its foreign policy, more generally – has been the ‘frozen time’ assumption. The Team just seemed to assume that the former Obama policies were still valid, virtually unaltered. The premise was of the world of four years ago, not the world as it is today. This is the clear underlying theme to The Tablet piece: that the two poles of the internal U.S. vision on Iran on 6 January inverted, and that now, the Obama vision inevitably would be fully unrolled. Possibly, Netanyahu – so deeply immersed in the U.S. bubble – saw things similarly.

So intent were the Democrats on their ‘war’ to oust Trump at any price, it seems, that they took their eyes off the radical changes taking place around the globe. They did not envisage the possibility of Iran sticking a spanner in their works. Belatedly the window for a deal – if there is to be one at all – is now understood to be narrow indeed.

This American lacuna however, is not confined to Iran alone. The world has changed – perhaps decisively – yet America seems to be pursuing its policies of yesteryear.

Across the Beltway, China is unanimously regarded as the premier U.S. national security threat. But policy seems still to be rooted in the profound western conviction that a one-party system is unsustainable because it is incapable of innovation, and therefore can easily be bested by a ‘can-do’ America.

This view rests however, on the flawed premise that the CPC should be equated with the Soviet Communist Party – an institution that crumbled under America’s tactic of forcing it into financial over-extension – in the U.S. narrative. But why has this understanding not been updated? It remains the common currency amongst those Americans who believe the U.S. will succeed in ‘out-competing’ China.

“Yet the two Parties have very little in common. Why should they? Russia could hardly be more different from China. The CPSU was a historical failure: in contrast, the CPC, over the last century, has arguably been the world’s most successful political party”, writes Martin Jacques. “It is impossible to understand the CPC in terms of traditional Marxism: from well before 1949, the CPC’s Marxism was highly nativized. The CPC, furthermore, is rooted in, and profoundly influenced, by Confucianism. It might be described as a hybrid of Chinese Marxism and Confucianism. The CPC is shaped by, and is as complex as Chinese civilization – of which, of course, it is a product”.

Similarly, U.S. thinking on Russia shows little or no innovation either: It seems set on repeating the old Afghanistan quagmire ploy from the Brzezinski era – of drawing Russia into a new Ukraine quagmire so as to drain Russia’s political focus and energy away from the China alliance – and, again, to crash the oil price, with Biden’s Green Revolution, re-setting the world into clean energy mode, and away from fossil fuels use, for ever.

The Chinese have an old wisdom which seems perfectly to encapsulate U.S. foreign policy at this time. It is called “watching the tree to catch a hare”. Once there was a boy who was told by his master to catch a hare. He went into the woods and looked around. Lo and behold, at that moment, he saw a hare running along at full speed. As he watched in astonishment, the hare ran smack into a tree and knocked itself unconscious. All he had to do was to pick it up. For the rest of his life the boy waited behind the same tree, in the hope that more hares would do the same thing.

The boy is like U.S. foreign policy: expecting the same conditions to be waiting for the new Washington team; ‘watching the tree’ hoping that another hare will just fall dead, and all that is required is to pick up the carcass – and away to lunch on it.

0 thoughts on “Watching the Tree to Catch a Hare”