HOME / Politics / The End of Époque 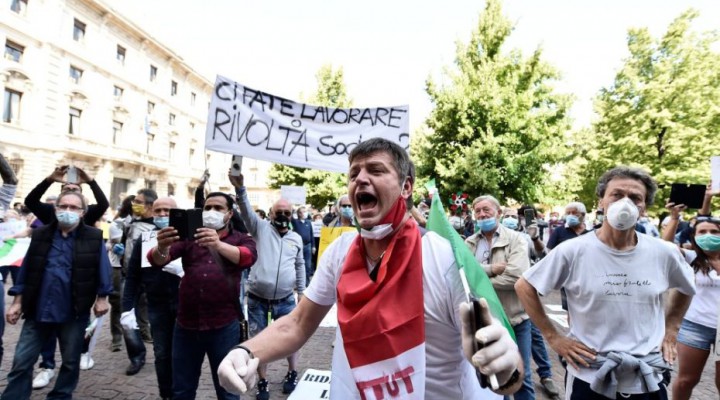 Convulsions ahead? The decay of an era, and the inevitability of social and political mutation?

The Leopard, the celebrated Italian novel, treats of ‘end of époque’ and its lacerating convulsions. Its principal protagonist, the Sicilian nobleman, the Prince of Salina, is struck by the haunting presentiment of an imminent end to the thousand-year era of ‘the leopard’ (his family’s insignia); to the end of long-observed Sicilian social structures and rituals – and to his own demise, and that of his family. He has heirs, but Salina understands full well that he will be the very last ‘leopard’. A central theme to the work is that of mortality, decay in the face of inevitable mutation; the fading of beauty, the fading of codes of conduct – and advent (of what to him) was a callow, ill-mannered incoming era of politicians peddling illusions, and of unchained stark ambition and greed.

It is 1860. And the ‘fat-tail’ to the French and 1848 revolutions, the Risorgimento, has bloodily disgorged itself into Palermo, with Garibaldi’s red-shirt, ill-disciplined army. They come with a baggage-train of utopian ideals: the modern unitary nation-state, republicanism, people-power –brimming with optimism for a redeemed people, and a redeemed future.

Salina understands. It is a new era; an end to the old. His young nephew, however, advocates breaking with the continuity of traditional values, to secure continuity of family influence: “Everything needs to change, so everything can stay the same”, he argues. The nephew duly marries into the moneyed, nouveau bourgeoisie and opportunistically switches allegiance (one moment with the tri-couleur, and the next, as an officer of the king), as the moment dictates. His uncle accepts his nephew’s tactics of fusion into the nouveau-bourgeoisie, yet cannot bring himself to act similarly. He feels he cannot throw himself into the illusions and shenanigans of this new politics – and yet remain true to himself.

A delegate from the north, a well-intentioned, sincere man, brings Salina the offer of a role in the Italian legislature to help steer Italy’s future. The former views the coming era as one of prosperity and of good administration, whereas the Prince does not. It will open rather, a void in structures, ties of belonging and in codes of conduct, the Prince suspects.

Salina is not, in principle, opposed to this rationalist conception of a homogenised nation. It was accurate as an expression of the Enlightenment; important in its own way, but nonetheless, missing entirely the heart of the matter. The Prince implies to the delegate that the structures to the human and Sicilian psyche are diverse, and reach far back.

As he says farewell, Salina tells the delegate that Sicilians are formed by their landscape and context, gesturing at the harsh mountain panorama surrounding them. We carry Nature in us: ‘Yes, some – like him – may have leopard-like qualities, but others share their nature more with jackals and hyenas’. He foretells that it will be the jackals and hyenas that will thrive and dominate the new era: “We were the Leopards, the Lions, [but] those who’ll take our place will be little jackals, hyenas …”.

Salina seemingly was justified in his pessimism. And his instincts, in respect of the consequences to the rupturing of societies’ complex dynamic structures to create this homogenised identity, were prescient. He spoke of Nature and landscape being in us – and of Nature’s strata being leopard-like or hyena-like, inter alia. Were the Prince to be present today, he might add humanity’s repeating encounter with pandemic as another element of Nature itself steering our future.

Of course today, it is no longer the Risorgimento with which are dealing. It is a hollowed-out modernity that many find wanting. Pandemics do have the tendency to spotlight and upend already existing fractures and fault-lines in society. The Black Death, that had a marathon run from 1346 to 1353, resulted in a sharp shift away from the lifeless Scholasticism of the previous era to a fascination with the pre-Socratic Ancients and their thinking — whether that of Egypt, Mesopotamia or Greece. It brought into being the Renaissance (a flowering that was subsequently cut-down by the Church and the Enlightenment).

As the plague triggered an end to one era, so Coronavirus may yet prove to be the catalyst to bring about the fall of this era of coerced universalism, stretching from the French Revolution to the EU, globalist politics and global financial governance.

Already the Coronavirus has produced its convulsions: with America at the very cusp of war over ‘lockdown’ and European countries rearing to open. In America, the virus has provided the ‘peg’ to trigger a fresh round of the U.S. civil war – the infringement of individual state ‘co-sovereignty’ vis-à-vis the Federal Executive, and of individual liberties, occasioned by stay-at-home orders. (Prince Salina might give us a wry smile from the grave, as he recalls Sicily’s earlier convulsions).

Whilst some of these convulsions are understandable, we are, however, still in the initial phase. In the U.S., the overwhelming weight of the bailouts have been directed (again) to the ‘hyenas and jackals’. President Trump and Secretary Mnuchin believe in a quick ‘V’-shaped economic bounce-back, but Jerome Powell and the Fed does not (the latter expects the economic recession to last through next year). Mnuchin is arguing against further Treasury handouts on the basis of his, and Trump’s expectation, of economic snap-back, and of the loss of jobs being speedily reversed. It is a big gamble.

For, in any Phase Two, the next ‘shoe to drop’ will be individual, small and medium sized insolvencies; foreclosure on home mortgages; student loan delinquencies; car loan foreclosures; restaurant-owner rent non-payments, etc. These will be much more difficult to resolve. Will then central governments be willing – and able – to bail-out these individuals, together with other small and medium sized businesses? (In this first phase, the U.S. has had a whopping 36 million unemployment claimants – and many of these jobs may never return).

Have governments given any thought to the implication of the financial crisis spreading to the middle classes, for whom often their only cushion in life is the inflated value of the house in which they live, but whose price may collapse? And if not, do they imagine that their citizens will acquiesce to losing their homes because of Coronavirus? And that the middle classes will still side with the élites?

So much hangs on the evolutionary course of the virus. But judging this wrongly, risks much. People will not so readily handover their homes and cars to the banks this time, as in they did the wake of great financial crisis of 2008. Why would they? It was not their fault. Convulsions ahead? The decay of an era, and the inevitability of social and political mutation?

Danse Macabre’ and a Fear of the Abyss: We All Fall Down

0 thoughts on “The End of Époque”