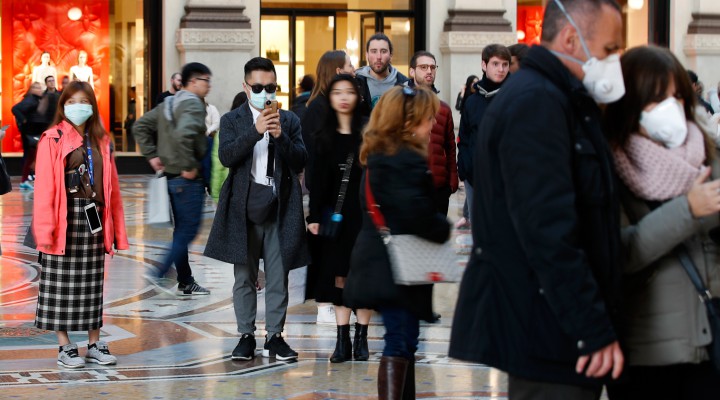 As is the case with most natural disasters, the Coronavirus has triggered price gouging on basic items like hand sanitizer and face masks.

MPN– The coronavirus has hit Italy. As of today, the country has confirmed at least 325 cases and 11 deaths already. The large majority of these are in the northern regions of Lombardy and Veneto. In response, Italian authorities have put several northern cities on lockdown, effectively quarantining around 100,000 people. The Venice Carnival was terminated early and many flights have been suspended. Top division football matches have been canceled, as has Italy’s Six Nations rugby match. Other buildings and events where large numbers of people congregate, such as museums, have also been shut down until further notice.

But in crisis there is opportunity. Following the dictates of supply and demand, vendors on Amazon have increased the price of simple hand sanitizer to over €30 for ($33) for an 80ml (2.8 oz.) bottle, capitalizing on the fear and concern of locals. The basic gel soap usually sells for a tiny fraction of that sum, but the uncontrolled escalation in price now makes the liquid more expensive than the finest single malt whiskeys and all but the most expensive perfumes.

Government officials are probing the price increases of other products too, some of which have seen rises of up to 10,000 percent. Milan deputy chief prosecutor Tiziana Siciliano said that “The price of masks online has risen from one cent to 10 euros each and a one-liter bottle of disinfectant that last week was on sale for 7 euros, was up to 39 euros yesterday.”

peak capitalism is amazon setting the price of a hand sanitiser at 30E/80ml as italy is going through a huge covid19 breakout pic.twitter.com/ih1Yy8nvH0

Businesses taking advantage of crises for economic gain is nothing new. After Hurricane Harvey hit Texas in 2017, there were widespread reports of establishments charging $20 per gallon of gasoline and $99 for a case of water. And during Hurricane Dorian last year, Florida’s Attorney General received over 2,400 complaints of price gouging. Disasters can also prove extremely profitable for some; during famines in Ireland and India during the 19th century, unscrupulous businessmen were able to make a fortune buying up land and other properties in exchange for tiny amounts of food.

The practice is almost universally condemned as immoral. Siciliano described the increases she had seen as “insane.” Yet after every instance of price gouging, there appears to be a cadre of columnists and economists willing to defend it. The Boston Globe’s Jeff Jacoby, for example, claims that it is not a problem at all, but a solution to one! He argues that any behavior to try to stop it is foolish. Pamela Villareal of the Dallas Morning News argues that price gouging actually helps victims of disasters and any laws against them should be abolished. And economics professor Lili Carneglia says that neighborhood 7-Elevens charging $20 for a case of water after a hurricane is a good thing, claiming without them there would be shortages in supply (although she admits, she is unable to convince most of her class of her position).

While these arguments might arguably have merit in a perfectly equal society, the reality is that in a country with differences in wealth, crisis situations inherently favor the rich who are best able to ride out rough patches or use their wealth to get what they need. No matter how much they need it, a poor person cannot outbid a rich one for food, water or shelter, meaning that historically, it is always the poor that starve in famines or die in natural disasters at a higher rate.

Thus, it is unlikely, given the public outcry and Italian authorities’ response of checking warehouses for the hoarding of medical supplies, that the market fundamentalists in think tanks and on the boards of newspapers have been able to win many converts to their position.

The World Health Organization (WHO) has condemned the media response to the virus, claiming they are creating a wave of hysteria and xenophobic sentiment. Earlier this month it took the step of declaring an “infodemic” of scaremongering news about the condition. Only three percent of Italian coronavirus patients have died, and all of them had pre-existing conditions, noted the WHO’s Walter Ricciardi at a press conference in Rome yesterday, reminding journalists that the vast majority of those infected recover quickly and easily. “We must scale back this great alarm,” he said.

0 thoughts on “As Coronavirus Hits Italy, Hand Sanitizer Rises to €30 per Bottle on Amazon”