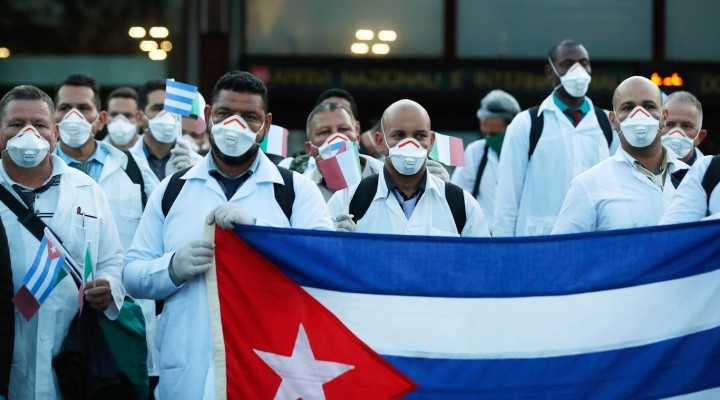 Videos of Cuban doctors volunteering to travel halfway across the world to put themselves in mortal danger for the good of people they have never met stirred the heartstrings of even the most cynical observer.

MPN– Only one week ago Joe Biden was excoriating Bernie Sanders for his praise of Cuba’s medical system. “These are flat-out dictators, period, and they should be called for it, straight-up,” the former vice-president stated during the Democratic debate in Miami. But as the world applauded 140 Cuban medical personnel arriving in Northern Italy last night, that view appeared already antiquated.

Almost 5,500 people on the Italian peninsula have already died, including 651 yesterday. Yet the videos of Cuban doctors volunteering to travel halfway across the world to put themselves in mortal danger for the good of people they have never met stirred the heartstrings of even the most cynical observer, going viral all over social media. As the doctors left the departure lounge in Havana, they were given a standing ovation from their countrymen and led to positive press even from the avowedly anti-communist New York Times.

Watch: Cubans doctors arriving in Italy to help combat the coronavirus in Lombardy where scores have died. pic.twitter.com/MXQ14bWTU2

In contrast to the United States, who reportedly attempted to bribe a German pharmaceutical company to give it exclusive control over a coronavirus vaccine it is working on, ensuring it would only be available on a for-profit basis, Europe has primarily received help from countries like Cuba, China and Vietnam; states that have not bought into the neoliberal method of organizing society. China has also sent tons of medical equipment, including lifesaving ventilators, to Italy, while Vietnam has sent locally made test swabs. In comparison, 500,000 COVID-19 test kits made by an Italian company in Lombardy – the epicenter of the outbreak – mysteriously found their way to the U.S. aboard a military plane last week.

In one of Italy’s darkest hours, they find they are not alone. Cuban doctors arrive in Italy with one mission, to save as many lives as they can. pic.twitter.com/K7r3DWqy8r

Despite facing an uncertain future, Cuba has also sent medical workers to Nicaragua, Venezuela, Suriname and Jamaica over the past weeks, but to less fanfare. Upon greeting 140 Cuban professionals at Kingston International Airport Saturday, Jamaican Health Minister Christopher Tufton lauded their neighbor’s generosity; “In a time of crisis, the Cuban government, the Cuban people … have risen to the occasion, they have heard our appeal and they have responded,” he said. Prime Minister Andrew Holness was equally thankful; “Jamaica is grateful for the support of Cuba as we fight this COVID-19 pandemic,” he wrote. The United Kingdom also thanked the Caribbean island for its welcoming of the British cruise liner M.S. Braemar into a Cuban port. The ship had multiple confirmed COVID-19 cases aboard and had been refused entry by many other countries.

Jamaica is grateful for the support of Cuba as we fight this Covid-19 pandemic. pic.twitter.com/1yigbCcyhd

The doctors putting themselves in harm’s way were far from blind to the risks. “Obviously I am scared. But when we went to fight Ebola in West Africa in 2014 we were scared too. But we fulfilled our mission there and we all came back,” said Dr. Leonardo Fernandez, speaking to journalists in Havana. “He who says he is not afraid is a superhero, but we are not superheroes, we are revolutionary doctors.”

For many decades, medical internationalism has been at the heart of Cuban ideology. There are currently tens of thousands of Cuban doctors in over 100 countries around the world. MintPress spoke recently with Sarpoma Sefa-Boakye, a doctor practicing in San Diego, CA. Dr. Sefa-Boakye is one of many Americans paid by the Cuban government to train as a doctor and serve underprivileged communities in the U.S. Most of those applying for the program are from poor backgrounds themselves and would not be able to otherwise study.

“You don’t hear of Cuba’s health contributions in the United States,” she said, noting that, remarkably, more African doctors have trained in Cuba than all African states put together. She first came across Cuban doctors while studying in her parents’ home country of Ghana. She also said that, “You cannot talk about Latin America’s healthcare without talking about Cuba. They are in these countries and in the Caribbean islands as well.” With the aid of Cuba, states with leftist presidents like Venezuela and Bolivia have managed to construct comprehensive nationalized healthcare systems. Some of the Cuban doctors that will depart for Italy pose for a photo in Havana, before they depart, March 21. Ismael Francisco | AP

The Cuban government has confirmed 35 cases of COVID-19, including one death and two full recoveries so far. Dr. Sefa-Boakye believes the island is better placed than its neighbors because of its culture of regular quarantining. “The only way to really tackle a virus that you don’t know, where transmission is questionable, or even how this virus came to be, quarantining has to be the only way that we can get a hold of transmission” she said. “The science will tell you, you talk to any biologist or anyone who has taken a basic science class: viruses replicate. That is how they move. They need a host and a source. I learned that in Cuba… We don’t have options. You can’t go against science.”

The images of Cubans marching to their possible deaths might stir public sentiment against the decades-long policy of sanctions. Perhaps the greatest danger to the island currently is serious difficulties with food production, owing to a tightening of the blockade under the Trump administration, who described Cuba as belonging to a “troika of tyranny.” Despite price controls, staples like black beans are in short supply. More worryingly, so is soap. But the Trump administration has been using the pandemic to ramp up sanctions against enemy states, hoping for regime change.

Public opinion might be changing, however. Sanders actually won the Cuban-American vote during the Florida primary, with many Miamians who criticize the communist government are quietly returning to their ancestral homeland for medical treatment. Regardless of the sanctions, medical personnel will continue to fight disease around the world, according to Carlos Armando Garcia Hernandez, a nurse traveling to Italy; “This is a global battle and we have to fight it together.”