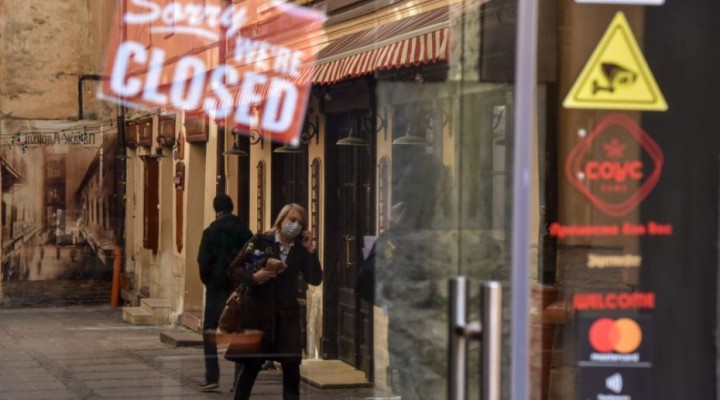 As the U.S. ineluctably moves up the exponential virus curve, the appeal of Bernie’s ‘healthcare available for all’ approach may become unstop…

Dr. Michael Osterholm of the Centre for Infectious Disease Research at University of Minnesota warned this week that the U.S. was unprepared for a Covid-19, and that the health crisis will get much worse in the weeks ahead: “Right now, we’re approaching this like it’s the Washington, DC, blizzard — for a couple of days, we’re shut down,” Osterholm said. “This is actually a Coronavirus Winter, and we’re in the first week.”

Yes, President Trump had indeed opted for laconic stoicism: telling us that the Virus was fake news, and no worse than seasonal ‘flu; it would go away, once the sun came out. Simply, he blamed the Chinese. Now, Americans and skeptical Europeans, are beginning to understand just how different is Covid-19 from ordinary ‘flu.

Europeans have reacted diversely, but with the exception of Italy, largely have prioritised maintaining their GDP – even at the risk of seeing their health services collapse, when acute cases peak at levels beyond European intensive care capacities. The UK says it is in a ‘containment phase’, but in reality it has been doing next to nothing to halt the virus quietly propagating within communities.

Lombardi in Italy has a first-rate health system, which is now underwater (at 200% of capacity), and working to a ‘survival of the fittest’ strategy – leaving others to live, or die, without intensive care attention. Indeed, older victims will not even be viewed by ICU staff. European states which have eschewed de-socialisation measures may come to regret their option. De-socialisation is costly; but ultimately works (i.e. in the slowdown in the Italian ‘red zone’ infection rate).

The term ‘containment’ is a misnomer. The virus is almost impossible fully to contain, as it ‘hangs in the air’ – airborne (see here). It can be spread by carriers who do not even know they have the virus. ‘Containment’ cannot now halt the spread of COVID-19, but social lock-downs can slow transmission, and – more importantly – flatten its peak, thus lifting some of the pressure off scarce Intensive Care Units. Whereas, without de-socialisation, we are likely to see an exponential spike in infection rates in those countries where the government has done little to minimise personal contact.

Make no mistake: there will be political retribution in store for those leaders who bet wrongly – that the virus effects were exaggerated, and that the crisis would pass – if only one kept ‘a stiff upper lip’ (i.e. clung to heroic stoicism).

Now, just as suddenly – for markets – what had been a pandemic which many investors queried, has coalesced into a much bigger crisis. We find ourselves at the epicentre of a massive and expanding global economic ‘shock’ – well, three interconnected shocks really: A growing ‘Supply Stop’; an oil price shock; and now an incipient financial and liquidity crisis.

Just to be clear: the virus did not cause the economic crisis. It was the Federal Reserve who laid the ticking bomb some time ago (with its debt-led, money-creating policies), and then armed the Fed’s ‘explosive device’ in 2008 through its subsequent financial asset-bubble blowings. In one sense, however, Trump did begin the squeezing the trigger to this crisis with the launch of his Great Power competition with China.

He initiated a Trade and Tech War to try and hold back China’s growth. However, in so doing, he inevitably started tearing apart the root rhizome to the global trading and supply-line system. Britain had tried this trick in respect to Germany before WW1. It didn’t end well. It led rather, to economic contraction, at the very moment when an extended Empire was susceptible to trade shock.

Today, the U.S. relies on massive debt-leverage to keep aloft the appearances of it being a continuing world order hegemon. The trade war, however, reduced America’s revenue and trade reach – just at the moment when the U.S. Empire became susceptible to debt ‘shock’, and shows signs of middle-age ‘spread’ and a lack of ‘puff’.

The net effect inevitably has been to weaken global trade, at a time when the economic cycle was at a late stage. Demand destruction was already apparent in the oil markets, as the arteries of trade turned turgid – i.e. well before OPEC fell apart – and the oil-price war erupted – adding a further impulse to the incipient market crisis.

Now we have ‘lock-downs’ and supply shock (thanks to Covid-19), and anyone – corporate or individual – relying on cash income to service debt, is unquestionably going to face crisis, as the cash-flow dries up. We are likely to see cascading consequences, as one missed payment leads to, and aggravates, another’s financially constrained circumstances.

In 2008, there was a crisis, but one purely in the financial system. Purely monetary measures then were used to quieten the flames of a banking crisis. Today is very different: We have a supply shock, and all the world expects the Central Banks and the authorities to sort it out – to find a solution – and to offer a plan.

This time it is different. For there is no plan.

And the reason for this is that all the Central Bank ‘models’ for planning and managing an economy are wholly monetary (with intervention in the real economy seen as free market heresy). And for decades, we have been caught up in the ‘ideology’ that politics somehow is not really ‘political’ at all.

‘That’ which we think of as politics – should really be understood as no more than the tweaking of a machine (the economy). And this is best done by technical experts: bankers, academics and business leaders, and the like. This is not politics at all, they say; It is technological ‘management’.

Jim Rickards, a leading U.S. financial commentator, writes “Equilibrium models like those the Fed uses, basically say the world runs like a clock and occasionally it gets knocked out of equilibrium. And all you have to do is tweak policy or manipulate some variable to push it back into equilibrium. It’s like resetting a clock… They treat markets [and the economy] like they’re some kind of machine. It’s a 19th-century, mechanistic approach. But traditional approaches that rely on static models bear little relationship to reality. Twenty-first-century markets aren’t machines, and they don’t work in this clockwork fashion.”

At some point, [economic] systems flip from being complicated … to being complex. [And] complexity opens the door to all kinds of unexpected crashes and events. Event behaviour cannot be reduced to its component parts. There is diversity of actors in an economy, and interconnectedness; but the key element to complexity is adaptive behaviour. Something unexpected comes – it seemingly arrives out of ‘nowhere’.

Any number of similar grains of sand can be added to a sand pile – yet one, no different to any other – will cause the pile to landslide, and collapse. The point here is that the more and more complicated the system becomes – the more unstable it becomes (i.e. instability becomes inherent, beyond some undefinable point of complexity) – so that just one undifferentiated grain of sand can trigger the sand-pile avalanche.

Well: here we have had three grains of exogenous events: A supply ‘stop’ in almost all of China; the virus causing lock down in Italy (as well as in Asian economies); and the price of oil falling out of bed.

So how can a purely monetary equilibrium model come up with a solution for Covid-19? It can’t. You can’t fix a viral pandemic with monetary easing.

The political consequences of this expanding conflagration are huge. The ‘Fiscal remedies’ option may prove to be another misnomer: If tinkering with interest rates won’t re-start factories emptied by pandemic, then marginal tax tinkering won’t either. Fiscal measures will likely boil down to the tax-payer bailing out underwater companies (such as the U.S. shale fracking industry). Or, more probably, Central Banks will just ‘create’ the bail-out money, thereby further debasing and corrupting their fiat currencies.

This crisis has the feel of an End of Era: At whom, and at what, will popular anger be directed – as people wake up to the understanding that their leaders have no plan.

This may be particularly so in the U.S. Most U.S. retirees have their pensions invested in the markets (via their 401k). Trump’s bluster is unlikely to re-inflate that bubble for American pensioners. Where it becomes potentially explosive however is in health care. Yes, U.S. states have ICUs – but only for those who pay. Many Americans live paycheck-to-paycheck, and even if they have insurance, the deductibles are huge. Many Americans have neither savings, nor health insurance. Will virus victims simply be left to die in the street?

As America ineluctably moves up the exponential virus curve, the appeal of the Bernie Saunders approach of ‘healthcare available for all’ may become unstoppable. This alone may upend U.S. politics.

For Europe, which does have public healthcare, Ambrose Evans-Pritchard perceives a different conundrum: How will Italy fund itself – with the economy at standstill (the FT reports that Italy is now working at “10% capacity”) and with social expenditure exploding?

The coronavirus may prove to be the crisis that moves Europe to the crux: Another ‘negative feedback loop’ would surely either force Italy out of the Euro altogether, or result in the EU adopting a truly unified fiscal and monetary union. But is full tax and fiscal union viable now – after Brexit – and with France likely to join with Germany in requiring a massive, social bail-out facility too? And who will pay? The other northern member-states will suspect a Trojan Horse concealing troops intent on raiding their tightly-held pocket-books. The IMF can’t, and the U.S. already is in deficit – and about to sink in, deeper yet. This, we suspect will become a major issue ahead.

Living here in Italy under lock-down, one senses the huge suspicion accorded to all incomers into the local community. All are feared as virus ‘carriers’ (even fellow Italians). It is obvious that this virus will further harden sentiment in Europe against immigration (already perceived as bringing disease into Italy) and against the ‘open society’ agenda. What is plain too, is how Italians are falling back onto community – and local community support. When Italy appealed for virus assistance (face-masks and respirators), member states did not respond (they wanted them for themselves). Who responded? Well … China.

Covid-19 is not making Italy more EU communautaire. Rather the reverse. Italy is probably not alone in this – as one British commentator writes, “the global response to coronavirus shows that the nation state is back”. The EU is emerging again as dysfunctional when confronted by a major crisis.

Finally, will the western neo-liberal, hyper-financialised model survive the inevitable Covid-19 post mortem? Or, will we witness a return to something like the political economy of the ‘real’ economy? Will political sentiment ultimately shift Right in search for more functional governance; or to the Left in search a less unequal, less rigged, system?

0 thoughts on “Dysfunctionality in a Coronavirus Winter”