HOME / SOCIAL/CULTURAL / Danse Macabre’ and a Fear of the Abyss: We All Fall Down

Danse Macabre’ and a Fear of the Abyss: We All Fall Down 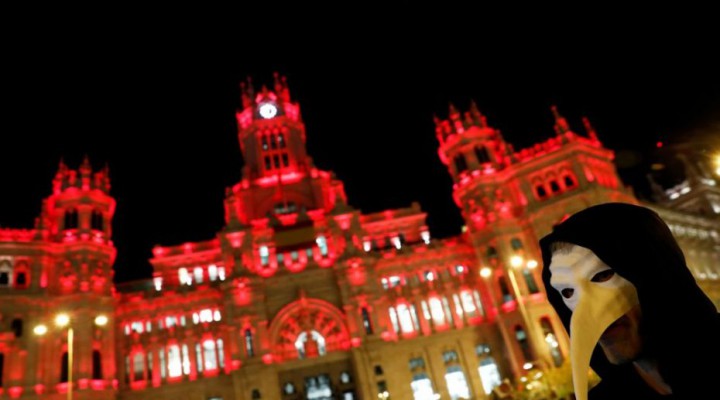 It is the children’s nursery rhyme, Ring-a-Ring-a Roses, that originated during plague years, that ends with “we all fall down.”

In the European imagination, the harbingers of contagion (whether plague or cholera), were conjured as shadowy, cloaked, and hooded forms, presenting a vaguely human silhouette, yet within the stygian recess of their black hood, no face was discernible – only a long, grey, birds’ beak jutting out. These ‘doctors of the plague’ inspired the shivers. Cities were portrayed deserted, immobilised by an extensive, lofty, sinister power. Behind those walls, people were dying. Silence. Still today, the beaked-bird masks of the plague doctors are to be found in Venice.

Maybe the Medieval mind-set does not seem to comport with that of ours today. But nonetheless, it remains a truism that biological fear of the lottery of Death, and political fear, are often found entwined in a danse macabre. Contagion may not be the direct cause, but whether it be the plagues of Italy, or cholera in nineteenth century Europe, the fears of the élite, and the anger of an infected, hungry, and hope-shorn mobs have combusted to overthrow established orders.

In the space of a just a very few years – in the late 1400s – Florence would invert from being guided by a recreated Platonic Academy, to a dictatorship headed by the sinister, black-robed Girolamo Savonarola – an extremist, ascetic cleric, who burnt Florence’s civilisational artefacts in huge ‘Bonfires of the Vanities’. Society, in the wake of many pandemics literally has cascaded into revolution – as did choleric Europe in the 19th Century, with Kings deposed, and the élites gripped in a hysteria of fear at rising mob populism.

“Shutting down the economy is just scare-mongering: there is another agenda going on …”

“The WHO is part of the UN, and the UN is for this climate change, and this is what their objective has been: Shut down the world economy, bankrupt everything you possibly can, and then rebuild from scratch …

“The devastation in the economy is unbelievable. Our computer is very well known. Just about all the intelligence agencies look at it because it’s the only fully functioning artificial intelligence system in the world. It was saying unemployment was going to rise dramatically and retest the Great Depression highs.

“That’s never happened like that. Even in the Great Depression, it took three years to get to 25%. We passed 13% in the first month … From the very beginning, I said something is not right. Something is wrong …This is really going to push the debt bubble over the cliff …

“The number that has died is minimal. More than twice that die from the flu. What [Trump] needs to do is open up the economy instantaneously … I think he needs to appoint a special prosecutor to investigate who started this. All the information I have is pointing to a deliberate and intentional movement to harm the economy. These people are elitists”.

The accusations fly – soon a new Inquisition? On the one hand, there is a part of the U.S. political psyche that takes Rights – particularly 2nd Amendment rights – to the limit. (Just as in France, in the 18th and 19th centuries, the shibboleth of total sovereignty to the people was taken to the limit – courtesy of Madamme La Guillotine). President Trump just last week, seemed to be playing into this ‘populist revolt’ against lockdown and the globalist élites (especially in opposition to Democratic state governors), when he tweeted in advance of protests: “LIBERATE MICHIGAN!,” “LIBERATE MINNESOTA!,” and “LIBERATE VIRGINIA”, and save your great 2nd Amendment. It is under siege!”.

On the other hand, there exists too, a wide recognition of the ‘contagion paradox’: In spite of the (supposedly) empirical projections by ‘experts’ and modellers coming down on both sides of the wall (serving opposing narratives), there is nonetheless an élite (not just globalist) fear, that the virus is treacherous; it cannot be predicted, and at a moment of inattention, can snap back, more deadly than ever.

It becomes a case of “pick your poison: either endure a hard lockdown until the job is done; or risk on-and-off lockdowns lasting much longer, vastly compounding the economic damage over time. Can governments keep shutting people up again, and again, with any hope of sustaining social consent? Doubtful”, suggests Ambrose Evans-Pritchard.

This latter ‘camp’ cites parallels with the U.S. ‘flu pandemic in 1918. There were mass protests, then, too, demanding an end to quarantine policies, after the first wave began to subside – even to the point of San Francisco’s “anti-mask league”. But premature relaxation then led to a second deadlier wave, a few weeks later.

There is nonetheless, a pattern here. Adam Zamoyski in his Phantom Terror, outlines the history of European élite repression and police espionage in the half-century following the overthrow of the French monarchy in 1789-93. The European Industrial Revolution then was in full flow: families were dis-embedded from rural communities, from their roots, and severed from local support systems, and then decanted (as a result of land clearances), into the overcrowded, insanitary misery-belts of the big industrial cities. Then from 1831, these misery belts were struck by four consecutive, and virtually concurrent, cholera pandemics. Commonly believed, was that cholera was spread via the air, through a cloud-like ‘miasma’. Others firmly believed that since the disease spread more rapidly through poorer districts, that the wealthy were purposely poisoning the poor. Still more believed that cholera was a visitation from God and that he was exacting a punishment to the community on behalf of their sins. This too, was the era of Laissez Faire. The British government would allow two million Irish to die of hunger (the potato famine of 1845), rather than compromise on its austere ideology of free markets.

It was an era of ugly mobs and bloody revolt against a fabulously wealthy, ‘far-off’ élite, ensconced in their palace citadels. Professor Zamoyski’s deadliest strictures, however, are directed against the rigid, fear-driven, authoritarian reaction of the propertied classes, which he demonstrates was lethally counter-productive – as well as often absurd.

Yes, there is good reason – drawn from that era – to look skeptically at all this European and U.S. talk of ‘Covid-19 war’ and its ‘time-of-war’ narrative, justifying social intrusion, electronic surveillance, and discipline, whilst bailing out key institutions. It is an old pattern.

The French historian, Patrick Bucheron, in Conjurer la Peur, links this well-worn pattern of repression to the frontispiece of Hobbes’s celebrated Leviathan, published much earlier, in 1651: “Here again there is a city depopulated by an epidemic. We know, because at the borders of the image, we identify two silhouettes with birds’ beaks, which represent the doctors of the plague, while the people in the city have been sucked upward, ballooning the figure of the Leviathan state monster, who is very confident of the fear he inspires”.

Are these the deeper (unconscious) fears being expressed by Martin Armstrong? Then, it was the Industrial Revolution that led to social tensions and revolt. Today, it is the globalist, financialised revolution, with one billionaire (David Geffen), tweeting out the iconic image of his sitting out the pandemic on his $590 million super-yacht, far away, in the Caribbean. Ref 8

So, tensions are again inflamed. There is ‘another agenda behind lockdown’ say U.S. libertarians. But why should today’s danse macabre, between political fears and biological fears, tear society apart (as in the 19th century) or result in revolt? If lockdown is managed well, might not ‘normality’ return? An answer, one commentator succinctly encapsulates in his article title, is: The Real Pandemic Danger Is Social Collapse. As the Global Economy Comes Apart, Societies May, Too.

Change happens quickly, and often unpredictably. Imagine, for example, dropping one grain of sand after another into a cone-shaped pile; the pile grows taller, and taller but, as it does so, it gets closer and closer to a critical state—the state in which one additional grain of sand can link into a ‘finger of instability’ and lead to a cascade, or even to the sand pile’s collapse.

The sand pile thought experiment comes from physics, where it is used to explain how complex systems often self-organize into a critical state. But physicists cannot predict when the addition of a single grain of sand will set off a cascade, or how large that cascade will be.

Two factors increase the chances of catastrophic risk occurring in complex systems. The first is that the more connections there are, the greater is the system’s level of risk. The second factor, is whether or not, those connections are ‘tightly coupled’. Something that affects one part of the system may cause cascading effects throughout the system – if tightly coupled to other parts. Complex, extended supply lines are an obvious example. The coronavirus is exposing precisely these vulnerabilities, creating cascading shocks throughout domestic economies, and in international trade.

Here is the point: Armstrong’s urgent demand to open the economy ‘immediately’ may already be too late. Economists tend to think of the economy as a machine that enjoys some inherent mode of equilibrium, and that if Trump would only press the starter button, it would brr–brr back to life.

But it is arguable that the western economy has been at ‘critical state’ since 2008, when the U.S. Fed kept scooping ‘fingers of instability’ back into the pile, whilst patting them down with QE. That is to say, cascade was an event already poised to happen. Coronavirus just happened to be the ‘pin’ that burst our mindset bubble.

The coronavirus and the resultant economic lockdown has set multiple ‘fingers’ of instability cascading. The virus is complex, as all nature is complex. And humans are complicated. We, ‘complicated humans’, have introduced separate economic, social and political complexities through the systems we built, largely in disregard for those natural complexities in the world around us. In so doing we have set up fragilities.

The danger, then, is of system-cascade. But more than this, what might be the consequences were complex systems to collide into one another? Analysis becomes almost impossible when multiple complex systems interact with each other, and produce feedback loops. The International Trade crisis is crashing into the European and U.S. economies (yet other complex dynamic systems), and is impacting on their domestic political processes (yet further complex dynamic systems).

Since the ‘Enlightenment’, the West has accustomed itself to thinking that it controls both nature and our environment. This has had the effect of sheering us off from nature’s complexity for a while, but only at the cost of opening space for us to insert ourselves into complex systems that are themselves intrinsically fragile – in the context of larger complexity.

And now – unexpectedly – nature’s own complexity has slapped our face.

This has turned upside-down everything that we have taken for granted over decades. We thought we were in control. Now, the ‘doctors of plague’ dictate to us, apparently quite randomly. The biological fear of Death, and the fear of slipping into hopeless Abyss, embrace in une danse macabre for the desperate, who are living marginalized, in the so-called black hole of society in the most lawless neighbourhoods of our biggest cities.

0 thoughts on “Danse Macabre’ and a Fear of the Abyss: We All Fall Down”